Todd’s Note: Most preppers agree that owning night vision would be a great addition to their gear.  Some might say that it is even a necessary piece!  One of the problems that many encounter though is the price point.  There are various types and models out there that vary in price and for someone who wants to purchase night vision, this could cause a lot of confusion and wasted money.  You should be well informed before putting down the money to own gear that your life might depend on.  This  post  does a great job of describing the different types and pros and cons of owning that specific type of night vision. 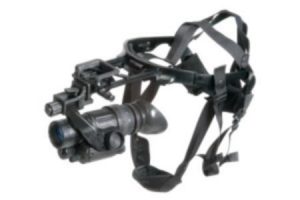 Night vision devices often fail to make it to the top of a prepper’s priority list.  This is partly due to the cost associated with acquiring quality night vision and is also because it is difficult to know where to start when buying an unfamiliar device.  Understanding night vision and what is best for your needs can be challenging.  A great starting point is to learn the basics of how the available night vision technologies work and become aware of important considerations all preppers should keep in mind.

There are three basic technologies available that can aid the user to see in dark environments: standard, digital, and thermal.

Standard Positives – Standard technology offers the best low light performance for light amplification technology.  Since it has been around the longest, it is the most mature and has the widest selection of devices to choose from.  It has remained the technology of choice by the military for years, so there are options available that are designed and thoroughly tested for tactical applications.  Standard night vision also gives the best battery performance.  Most devices will operate 40-60 hours on average or more on one battery.

Standard Negatives – Standard night vision will not work in total darkness without the aid of an infrared (IR) illuminator.  In very dark environments, this can limit the use of the device if you are concerned with the possibility of giving away your position to others with night vision capabilities.  In addition, standard night vision should not be used during the day as it can be damaged by exposure to bright light.  Lastly, the technology itself is inherently somewhat fragile.  Even the most durable weapon mountable devices are prone to damage due to recoil if not matched properly to the rifle.

Digital night vision technology also works as a light amplification system, but it does so by amplifying an electronic signal that is derived from incoming light.  A digital night vision device will use a CCD (charge-coupled device) or CMOS (complementary metal-oxide-semiconductor) as a light sensor that produces the electronic signal to be amplified.  This technology is nearly identical to that of a digital camera with the exception that it will detect both visible and infrared light.

Digital Positives – Newer digital devices in the $600-$1,000 range provide the best image quality to cost ratio.  They can be used both during the day as well as at night making them more versatile.  Weapon mountable digital devices also are not as susceptible to rifle recoil damage.

Digital Negatives – Digital devices have a significantly higher power requirement for operation causing them to go through batteries much faster than standard devices.  Typical battery life is between 5-10 hours and many devices require multiple batteries to achieve that lifespan.  In addition, because they work by amplifying light, digital devices have the same total darkness limitations as standard night vision.  The best digital devices will not perform as well as top quality standard technology in a low light setting. This makes them even more reliant on IR illumination for acceptable performance in low light conditions. 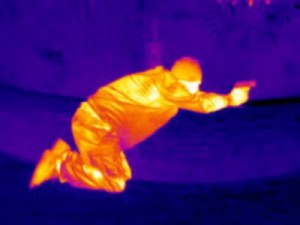 by detecting variations in thermal energy (heat) and displaying the differences.  It is equally effective and reliable in both daylight and pitch dark conditions.

Thermal Positives – One of the biggest advantages with thermal imaging is that it does not require any light to perform.  It works in complete darkness and will never need the aid of an IR illuminator to produce an acceptable image.  Therefore, it can be effectively used as a passive device under any lighting condition, allowing use without giving away your position.  Since thermal devices rely on heat instead of light, they can detect objects through fog, brush, and other obstacles better than light amplification technologies.  People, animals, or anything warm will stand out in a thermal image which makes it perfect for finding living creatures.  Thermal devices can also provide valuable information that other night vision technologies cannot.  For example, if you are looking at a dwelling, a thermal device can detect heat escaping from the building indicating that it is being lived in, even if it is blacked out.

Thermal Negatives – The biggest downside of thermal technology is the cost.  Entry level devices cost about $2,000 and weapon mountable devices start at almost $4,000.  The cost will be significantly higher to get the level of image detail comparable to other night vision technologies.  The other consideration for preppers is the battery life.  Like digital, thermal devices require a lot of power to operate and thus, have shorter battery lives.

Besides the type of technology, there are few other very important things to consider when deciding which night vision option is best for you.  The most important is sustainability.  Any night vision device will be useless if it can’t be powered on.  Many night vision devices can only use CR123A lithium batteries for power while others use standard AA.  Some popular thermal devices only have internal rechargeable batteries.  When deciding on a device, make sure you have a way to power that device for an extended period of time.  A device that will operate on AA is preferable since AA batteries are more universal.

If you are concerned about detection, a device with a full eyecup is also critical.  The eyecup needs to have the ability to make a seal with your face so that no light will leak when the device is turned on.  Without one, light will shine on your face highlighting your position to anyone else with night vision capability and possibly even to those without.

It is critical to have a solid understanding of standard, digital, and thermal night vision technologies when buying a device.  This will ensure that you choose the right technology that will best meet your requirements and budget.  Even if higher end devices are currently outside of your budget, basic night vision capability is better than no capability at all.  The first step is to understand the options available and important considerations so you can make a plan.