Do you believe that preppers are a few cards short of a full deck?  Do you assume that anyone that is “preparing for doomsday” does not have their elevator going all the way to the top floor?  Well, you might want to read this first before you make a final decision that all preppers are crazy.  The information that you are about to read shook me up a bit when I first looked it over.  To be honest, I had no idea how incredibly vulnerable our economic system is to a transportation disruption. 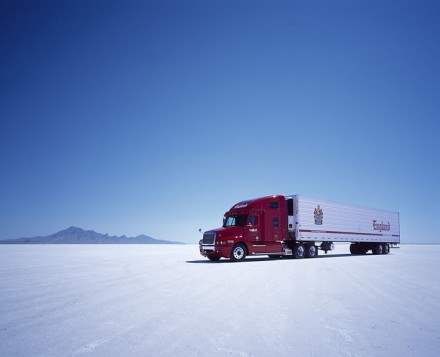 I am continually getting emails and comments on my websites asking “how to prepare” for what is coming, so when I came across this information I knew that I had to share it with all of you.  Hopefully what you are about to read will motivate you to prepare like never before, and hopefully you will share this information with others.

Originally, I was going to write an article about the rising unemployment in Europe today.  Did you know that unemployment in the eurozone is now at a 15 year high?  It has risen for 10 months in a row with no end in sight.

But I have written dozens of articles about the economic crisis in Europe already.  So before starting on that article I started thinking of all the “preparation” questions I have been getting lately and I went over and checked out one of my favorite preparation websites: shtfplan.com.

Well, an article had just been posted over there about a report put out by the American Trucker Associations entitled “When Trucks Stop, America Stops“.

I went and found that original report and I was stunned as I read it.

The truth is that our “just in time” inventory and delivery systems leave us incredibly vulnerable to a nationwide disaster.

You see, it is very expensive to hold and store inventory, so most manufacturers and retailers rely on a continual flow of deliveries that are scheduled to arrive “just in time”, and this significantly reduces their operating expenses.

This is considered to be good business practice for manufacturers and retailers, but it also means that if there was a major nationwide transportation disruption that our economic system would grind to a halt almost immediately.

Once store shelves are picked clean, they would not be able to be replenished until trucks could get back on the road.  In the event of a major nationwide disaster, that could be quite a while.

So what could potentially cause a nationwide transportation shutdown?

Well, it is easy to imagine a lot of potential scenarios – a volcanic eruption, a historic earthquake, an EMP attack, a solar megastorm, a war, a major terror attack, an asteroid strike, a killer pandemic, mass rioting in U.S. cities, or even martial law.

If something caused the trucks to stop running, life in America would immediately start changing.

The following is an excerpt from the report mentioned above put out by the American Trucker Associations entitled “When Trucks Stop, America Stops“….

• Delivery of medical supplies to the affected area will cease.
• Hospitals will run out of basic supplies such as syringes and catheters within hours. Radiopharmaceuticals will deteriorate and become unusable.
• Service stations will begin to run out of fuel.
• Manufacturers using just-in-time manufacturing will develop component shortages.
• U.S. mail and other package delivery will cease.

• Food shortages will begin to develop.
• Automobile fuel availability and delivery will dwindle, leading to skyrocketing prices and long lines at the gas pumps.
• Without manufacturing components and trucks for product delivery,
assembly lines will shut down, putting thousands out of work.

Within two to three days

• Food shortages will escalate, especially in the face of hoarding and consumer panic.
• Supplies of essentials—such as bottled water, powdered milk, and
canned meat—at major retailers will disappear.
• ATMs will run out of cash and banks will be unable to process
transactions.
• Service stations will completely run out of fuel for autos and trucks.
• Garbage will start piling up in urban and suburban areas.
• Container ships will sit idle in ports and rail transport will be disrupted, eventually coming to a standstill.

• Automobile travel will cease due to the lack of fuel. Without autos and busses, many people will not be able to get to work, shop for groceries, or access medical care.
• Hospitals will begin to exhaust oxygen supplies.

• The nation’s clean water supply will begin to run dry.

• The nation will exhaust its clean water supply and water will be safe for drinking only after boiling. As a result gastrointestinal illnesses will increase, further taxing an already weakened health care system.

This timeline presents only the primary effects of a freeze on truck travel. Secondary effects must be considered as well, such as inability to maintain telecommunications service, reduced law enforcement, increased crime, increased illness and injury, higher death rates, and likely, civil unrest.

Earlier in the report, the reasons why America’s water supply would be in such jeopardy are described in greater detail….

According to the American Water Works Association, Americans drink more than one billion glasses of tap water per day. For safety and security reasons, most water supply plants maintain a larger inventory of supplies than the typical business. However, the amount of chemical storage varies significantly and is site specific. According to the Chlorine Institute, most water treatment facilities receive chlorine in cylinders (150 pounds and one ton cylinders) that are delivered by motor carriers. On average, trucks deliver purification chemicals to water supply plants every seven to 14 days. Without these chemicals, water cannot be purified and made safe for drinking. Without truck deliveries of purification chemicals, water supply plants will run out of drinkable water in 14 to 28 days. Once the water supply is drained, water will be deemed safe for drinking only when boiled. Lack of clean drinking water will lead to increased gastrointestinal and other illnesses, further taxing an already weakened healthcare system.

Can you see why I always recommend that you make sure that you and your family have access to fresh water and a way to purify it?

This report should be very sobering for all of us.

What would you and your family do if you had no food, no clean water and the stores were shut down because their supplies were gone?

An article by Tess Pennington entitled “Emergency Items: What Will Disappear First” contains a list of 100 things that are likely to disappear from store shelves first.  The following are the first 10 things on her list….

You can find the rest of the list right here.

Most Americans just assume that they will always be able to run out to the supermarket or to Wal-Mart and buy anything that they need.

But if the trucks stop running that will change almost overnight.

After reading the information above, does anyone out there still believe that preppers are crazy?

The truth is that there are good, solid reasons why millions of Americans have been storing up food, water filters and other supplies.

Our world is becoming increasingly unstable, and all of us need to get educated about how to prepare for the difficult years that are coming.

One nightmarish event can change everything that we take for granted in a single moment.

Just remember what happened after Hurricane Katrina.  Even though that was only a regional disaster, millions of people had their lives completely turned upside down by that tragedy.

Don’t make the mistake of assuming that just because the U.S. has always known tremendous peace and prosperity since World War II that things will always be that way.

Our lives will only continue to be “normal” as long as the trucks continue running.

When the trucks stop running in America, there will be mass chaos.

Are you prepared for that?