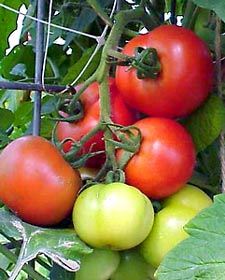 Meet the growers of super tomatoes: Their tomatoes are as big as cauliflowers, and their plants are stupendously tall and luxuriantly healthy. Year after year, they win contests, give away hundreds of pounds of fruit, and put the growers of ordinary tomatoes to shame. Who are these super-growers, and what miraculous methods, special seeds, and fantastic fertilizers do they use?

Although this country boasts many great tomato growers, we’ve found four whose huge plants and giant tomatoes are worthy of special note. They have some growing techniques in common, but also have discovered special techniques that gives them a certain edge in growing “the big one.” We’ve included a 10-step checklist for growing prizewinning tomatoes to help you grow your own.

In 1987, Gordon Graham of Edmond, Oklahoma, grew the world’s largest tomato ever–a whopping 7-pound, 12-ounce ‘Delicious’, listed in The Guinness Book of Records. In 1986, he grew a cherry-tomato plant that was 28 feet tall and 53 1/2 feet wide. Each year, he grows 25 to 50 plants of many varieties, selecting the best potential winners for extra attention as they grow.

He starts with his soil. “When I moved here,” he says, “the front yard was pure sand, and the back was solid clay, and gradually I’ve mixed them.” He actually rotates soil instead of crops, annually trading the topsoil layer (about 6 inches) of his tomato beds with soil from other beds one wheelbarrow’s worth at a time. If that’s not enough, he gathers leaves from the many large oak trees on his property, chops the leaves with a chipper-shredder, mixes them with horse or other manure, lets them compost for a year, and then spreads the compost on his raised beds, tilling it occasionally all winter long to bring insect pests up to the surface just before a hard freeze.

Another key to success is starting early. Although gardeners in his area near Oklahoma City (USDA Hardiness Zone 7) generally set out tomatoes around April 20th, he sets out his first transplants as early as February and is practically ready to harvest by April. Between early February and April 20, he insulates his plants in an ingenious way. Gordon rigs up a protective structure by placing a water-filled frost protector jacket inside a tomato cage, staking it to the ground with 1/2-inch dowels. Then he strings soft wire through five holes punched through the plastic walls to create a radial cradle, and on that he sets a second water jackets inside the cage. He further protects plants by wrapping them in row-cover fabric. With such dedication and ingenuity, it’s no surprise that he’s a regular winner for first ripe tomato in his region.

Once these beauties are growing, he directs his efforts to producing contest-sized fruits. He pinches off all blossoms until the stem of the plant is 1/4-inch in diameter at the base, and then prunes the flower clusters to produce only one or two fruits per cluster. Like many gardeners, Gordon grows his tomatoes in 5-foot cages of concrete-reinforcing wire, but he piles the cages three high, supports them with recycled stakes, and anchors the whole tower to a permanent trellis. Harvesting requires a 24-foot ladder!

Minnie Zaccaria, of Long Branch, New Jersey (zone 6), is one of the few women at the top of the male-dominated big-tomato-contest world. “When a woman wins,” she laughs, “people really notice!” The competitive bug bit her about 14 years ago when she entered New Jersey’s Tomato Weigh-In contest and came in sixth. The next year she was second, and for the last three years, she has grown grand-champion winners weighing close to 4 1/2 pounds each. Her winners come from a variety she developed herself, a hybrid of two ‘Beefsteak’-type heirlooms. Its name? “Big Zac,” of course.

Her growing techniques include giving special attention to each plant. Although she once grew as many as 100 tomato plants, she has cut back to 30 so she can lavish more care on each one, starti with planting in clear plastic cups to monitor root growth. She waters plants individually with a watering can and brushes off aphids with a paintbrush. She notes wryly: “A lot of people just don’t work as hard at it as I do.”

Like Gordon Graham, she believes big tomatoes start with great soil. “People call me The Bag Lady,” she says, “because I drive around until I find places where people have put out piles of chopped leaves and grass clippings, and I take them away to make leaf compost to add to my garden.” Every fall she triple-digs her 5-foot-wide raised beds as deep as 24 inches. She opens a trench, puts in a 6-inch layer of leaf compost, eggshells, manure, and other organic matter, covers it with soil, then turns the mixture with a spading fork. Next, she puts a layer of leaves on top and covers the whole bed with black plastic until spring. And she does this all herself.

To protect the fruits once they’re set, Minnie carefully ties each plant to a scrounged 7- to 8-foot metal pipe, removing all suckers below the first flower cluster. If a fruit shows promise of developing to competitive size, she gently supports its branch with an extra strip of cloth.

Ken Harper of Columbus, Ohio (zone 5), backed into tomatomania when his son decided to enter a few tomatoes in a county fair-and won a blue ribbon. “The whole family got real excited,” Ken recalls. “I’d always grown a few dozen plants, but the next year, we put out 100 plants. We got up to 500 in 1994.” He and his wife give away bushels to friends, neighbors, and co-workers and supply several local nursing homes. He has won prizes at the Ohio State Fair with flawless, 3-pound tomatoes. ‘Big Beef’ and ‘Celebrity’ have been two of his championship varieties.

For each of his plants, Ken digs a foot-deep hole and fills it halfway with compost, lots of manure, and a little 10-10-10 granular fertilizer. Each year, he digs the holes in a slightly different spot so the tomatoes are seldom planted where a previous hole was to ensure that new plants grow in nutrient-rich soil.

Romaine Breault lives near Minneapolis, Minnesota (zone 4), but that hasn’t prevented him from growing big tomatoes. His claim to fame is his success with growing them in containers. “When we moved here,” he explains, “my yard was heavily wooded, and there was almost nowhere to garden. Even when I cut down a few trees, their roots were impossible to deal with.” So when he came across a few big whiskey barrels cut in half, he bought them for planters. His container-gardening techniques yield prizewinning tomatoes weighing as much as 4 pounds. Each year, he raises only about 14 plants, experimenting with various heirloom varieties. His favorites include ‘Cherokee Purple’ and ‘Radiator Charlie’s Mortgage Lifter’.

Breault also pays fanatical attention to the soil. He fills the bottom two-thirds of his barrels with equal parts of peat, perlite, and compost. For the top third, he uses good garden soil mixed with composted manure and, unless there has been no hint of disease, each year he removes and replaces that top layer with new soil and manure. Blossom-end rot often plagues container-grown tomatoes, but Romaine has found that adding 1/4 cup of gypsum to the topsoil has eliminated the problem.

To train and support his plants, he fashions metal cages, sized to fit perfectly inside his barrels. He lets the first main side branch grow but otherwise removes every sucker (the new shoot that grows where side branches fork from the stem). He even protects the stems where they protr

Although our tomato growers extraordinaire each have special techniques for growing large fruits, they also have many techniques in common. All start from seed because it’s the best way to get healthy, robust plants of the varieties they want as early as they want. They all transplant t seedlings into larger containers at least twice before moving them to the garden. They’re scrupulous about hardening off, setting plants deeply, and protecting new transplants. They all fertilize regularly during the growing season with a variety of liquid fertilizers, foliar feedings, and top dressings of compost or granular fertilizers.

All of these growers mulch, usually with straw or plastic, to conserve moisture and prevent splashing, which can spread disease. They also avoid overhead watering.

Problems with plant diseases or insects are few. Some of this garden vitality may be the product of luck and location–as well as soil-moving–but then, these are the kinds of growers who pick off every yellow leaf and scout diligently for infant hornworms. Their prized plants are also assured plenty of sun and space. In addition, like little garden prodigies, these tomatoes receive a high level of training and support. You won’t find any superplants sprawling on the ground.

What can other growers learn from the success of these gardeners’ Though they have an extraordinary level of dedication every step of the way, they are not specialists. Similar attentiveness would undoubtedly give any of us big, beautiful tomatoes. As for that grand-champion tomato–even Gordon Graham has yet to beat his own record!

Deborah Wechsler of Pittsboro, North Carolina is a frequent contributor to National Gardening.