As preppers we should seek to become more self-reliant. Producing/growing your own medicine is another way to do that. I have four medicinal plants anyone can grow: Aloe Vera, Peppermint, Garlic, and Sage. As with any product used for Medicinal Reasons please CONSULT YOUR DOCTOR if you think you might have complications from using any of the plants below. I am not giving medical advice only hard research from reliable sources. 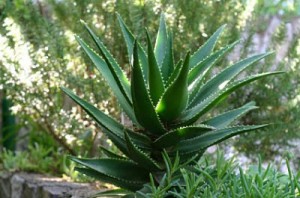 Aloe Vera  is a great plant for many reasons. It is considered a succulent, meaning its leaves are thick and fleshy. Inside the leaves is a clear jelly like substance used as a topical ointment for skin irritations, cuts, and burns. Aloe Vera has a long and storied history with humans. It is depicted on the stone walls of Egypt over 6,000 years ago and was known as the “plant of immortality.” Typically it was a gift to pharaohs as a burial item. The exact distribution of Aloe Vera is unknown. However, it is thought that it originated somewhere in Northern Africa, the outlying islands such as the Canary Islands and possibly the Arabian Peninsula. From these areas it was spread by human cultivation to East Asia, Europe and finally the Americas. Aloe Vera grows best in sandy well-drained soils. If you are going to keep it in a pot then make sure it drains adequately. If you go into almost any Health and Beauty section of a pharmacy, grocery, or department store you can see products made from Aloe Vera such as lotions, sunscreen and balms. Traditionally, in folk medicine, Aloe Vera was also used as a laxative when the dried juice called latex was taken orally. It likes sunny spots, but not too much sun. If you live in USDA planting zones 8-11, it is hardy in those climates. It is intolerant of frost or snow so its best to take it in when it gets cold. We have one in our kitchen window from a year ago and it has doubled in size and needs to be re potted.

Peppermint (Mentha × piperita) is a herbaceous plant which is actually a cross between watermint and spearmint. Originally indigenous to Europe it is now spread worldwide. Natively and in cultivation peppermint grows best in shady moist areas. In home gardening, it is best container grown as it spreads quickly due to its underground runners. Peppermint loves water as long as its soil is well-drained. The tops of the plants are usually gathered, the leaves and flowers, to be dried for use. Peppermint has likely been used for thousands of years for many common ailments. According to research at the University of Maryland Medical Center, it is useful to cure headaches, stomach problems, anxiety, nausea, skin irritations, and menstrual problems. Several studies also suggest that peppermint can kill many types of fungus, bacteria, and viruses. Peppermint contains a large amount of menthol, the source of its healing ways. I personally use peppermint essential oil and have found it helps me concentrate, reduces anxiety and even helps me breathe a bit easier on runs.

Garlic (Allium sativum ) is a member of the Onion family. It is best known for flavoring food and for warding off vampires and evil spirits. The clove of the Garlic is where the medicinal use comes from. Garlic is used for many heart and blood related problems. Garlic has been taken for medicinal uses for thousands of years and research has shown it does reduced hardening of arteries and other associated heart ailments. Other chemicals present in Garlic have been found to reduce cholesterol and even help prevent some cancers. I take it in pill form to promote heart health. Garlic contains a chemical called Allicin which is where some of its properties derive from. Garlic is native to central Asia, but has long been used in Asia, Africa, and Europe (especially the Mediterranean Sea region). Garlic is quite easy to grow, especially in mild climates. In colder climates it is usually planted in fall and harvested in spring. It is also easily container grown. Garlic grows best in soils with high organic content.

Sage ( Salvia officinalis) is a perennial shrub with medicinal and culinary properties. It is native to the Mediterranean region, but like every plant previously mentioned it has been naturalized to the rest of the world. It grows well in well-drained soils and is sun-loving. It is sometimes grown for a low ground cover as it reaches about 2 feet in height. Historically it was used for warding off evil spirits, similar to Garlic. It can be used as a tea to relieve a scratchy, sore throat. According to WebMd it is useful for stomach and digestive problems. It has also shown promise in testing for Alzheimer’s patients in improving memory and learning. It can also be applied topically to reduce the duration of cold sores when combined with rhubarb. We recently purchased some sage seeds to plant this year to grow.

The plants above are just a start. By growing these and similar plants we can take responsibility in trying to help ourselves. I encourage you to explore the plant world. We started here using our native resources to help us help ourselves. We can continue to do so. Thanks for reading and please take a look at my other articles! Happy prepping!

2 Replies to “4 Easy Medicinal Plants you can grow”