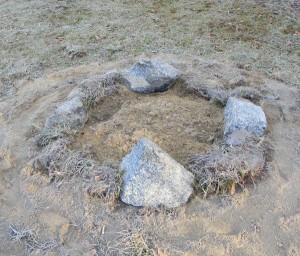 A few years ago I read Steve Solomon’s “Gardening When It Counts.” In it, he mentions in passing that he heard the Indians used to garden on top of their camp refuse. The remains of feasts, manure, crop wastes, etc. were tossed in a pit and plants were grown on top. (This was before the USFedGov displaced and killed off many of the natives, of course, so the data on their farming methods are unfortunately limited.)

I haven’t been able to nail down where Steve found his information, unfortunately, but I tried it and the results were impressive enough that I decided to keep fiddling around and tweaking the method. Now I’ve got a pretty good thing going. I call them “melon pits,” and I’m gonna share the idea with you.

Get Your… Stuff… Together

On my daily blog, I’ve posted multiple times on recycling human “waste” into food. Like it or not, we’re going to have to deal with sanitation issues during TEOTWAWKI – and maybe even if TEOTWAWKI never comes. Fresh water is a resource; contaminating it with sewage seems criminal, though that’s the world we live in.

My uncle used to run a truck stop that had a septic tank. Every few months, the plumbing would back up and he’d pump the tank out and shoot the disgusting sludge down into a ditch. He told me that an incredible abundance of tomatoes grew there… perfect… amazing… delicious… truck- stop-sludge-grown fruit!

All that to say, manure (raw or composted, human or animal) is an amazing fertilizer. Why not put it to use in a safe manner? If you create a bucket toilet (we made one for emergencies, since I live in a hurricane-prone area), you can collect the odoriferous contents together and grow food on them. In China, raw sewage is used directly on food, which is dangerous. It’s not that plants take up germs through their or anything – it’s that they get splattered. Without boiling, this food could literally kill you. However, if that sewage was buried in trenches, you could grow on top of it and even pick the fruit without washing them (if you wanted to live on the wild side) and you’d be fine, unless the ground had been flooded at some point and let the sewage come in direct contact with the produce.

Beyond Super-Dangerous Human Sewage (TM), other materials that are good to use include bones, kitchen scraps and spoiled meat, livestock carcasses, chunks of wood, chicken or any animal manure (just be careful not to get toxic manure), ashes, rotten fruit, etc.

The first year I tried this method, I used a post hole digger and a pickaxe to chop holes

into my rock and clay backyard patch of garden in early spring. I then filled those holes with the stuff I’d collected (I buried fresh chicken manure, a goat head and some spoiled beef stew, among other things) and put about 6″ on top of the pit. A month later, I planted sunflowers and Hubbard squash seeds on top of them and had great success. Those plants needed zero additional fertilization and tolerated drought better than the surrounding garden.

2. Dump in chunks of wood and sticks

3. Dump in dangerous and gross stuff

Here’s my theory on this method: I believe plants find their own nutrition as they need it. If the roots come in contact with something they don’t like, I think they’ll avoid it. If they find something they like, they’ll go for it. The reason I add the wood is for extra moisture retention and the extra fertility that’s found in rotting sticks.

Last fall, I dug about 8 pits out front, pouring in whatever manure, scraps, wood debris and slaughter wastes were available at the time.

Since it was chilly out, I planted lentils, peas, chick peas and fava beans on top of the newly minted melon pits, watered them once, then basically left them along until the spring. They kept the ground occupied before the red carpet was unrolled and the real stars arrives.

Once all the frosts were done, I planted Seminole Pumpkins and watermelons in a couple of pits and watered only a couple of times when it was really dry. In some of the other pits, I planted perennials like figs, mulberries and a guava. All have thrived – especially the mulberry. It was about 1′ tall when I planted it in April. It turned deep green a couple weeks after being planted and is now over 4′ tall and shooting for the sky.

As for the pumpkins and watermelons, we’re harvesting them now and they keep coming. The size of the watermelons hasn’t been as large as the seed packages advertise, but the fruits have been sweet and juicy. The pumpkins have produced big fruit, though not a ton of them.

My bet is that the weeds (which really love the melon pits) are cutting down productivity. I view that as part of the experiment, however. Despite my ignoring these plants almost completely, they’re producing a decent amount of edible fruit. Hard to beat that. With a little work – and maybe a wheelbarrow of mulch – I think you could up the yield significantly.

The melon pit system has multiple benefits. Because I like lists, I wrote another one.

Melon pits allow you to:

1. Use organic fertilizers that would normally be too dangerous or “hot” to use directly.

2. Dispose of “waste” in a grid-down situation

6. Be the weird neighbor

I threw #6 in there just for fun. My neighbors have to think I’m nuts digging pits around my front yard and planting stuff.

Of course, they’re buying their watermelons from the store.