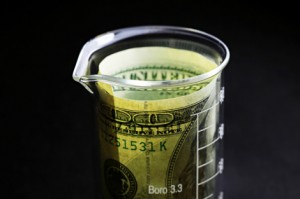 In the next few posts, I’m going to look at intellectual property rights in biotechnology and corporate influence over science. There are huge, philosophical issues to grapple with here, to wit: Should we even allow ownership of organisms? When it turns out that there are Monsanto crops growing in an organic farmer’s field (accidentally?), who is at fault? What’s the effect of corporations funding university research and patenting the discoveries of public scientists? As I’ve been doing, I’m going to focus on one sliver at a time, building toward bigger answers post by post.

You may have heard that companies place draconian licensing agreements on their genetically engineered seeds. In the same way that using software presumes you accept a raft of terms and conditions, using GM seeds generally means that you’re bound by a complex contract [PDF]. Scientists have said that these patent restrictions keep them from accurately testing GE seeds. However, the biotech companies claim that they cooperate with independent scientists and support objective research. So where’s the truth here?

In 2009, 26 scientists drafted an anonymous letter to the Enivironmental Protection Agency complaining that the legalese that came with each sack of GM grain was making it impossible for them to do their jobs. “No truly independent research can be legally conducted on many critical questions,” they wrote.

One of the anonymous 26 was Elson Shields, a corn-insect scientist at Cornell University.

“You had to have written permission from the companies for any science involving their seed, even if it was commercially available,” he said. Companies sometimes revoked this permission [PDF] in the middle of an experiment, undoing months of work. “Well, a research group decided to get boisterous about it and wrote that letter to the EPA,” Shields said.

This was not a group of starry-eyed environmentalists. “These were plant entomologists, mostly from Midwestern land-grant universities. We’re all generally pro-GMO,” Shields said. “It’s just that each event [of genetic insertion] needs to be looked at and evaluated on a scientific basis.”

“We readily admit that there were some concerns early on,” said Andy LaVigne when I called to ask him about this. LaVigne is president of the American Seed Trade Association, the organization that represents the crop biotech firms. But LaVigne says that he was caught somewhat off guard when Shields and the other scientists complained. “Well, we said, let’s get everyone around a table.”

That table was in a conference room at Iowa State University. The university scientists were shoulder-to-shoulder with the industry representatives for the first time.

“I think probably the biggest thing that came out of it is that we were sort of two communities talking past each other,” LaVigne said. “There were really a-ha moments on both sides. It evolved over the next six months and then the principles were adopted.”

Those principles made explicit an industry commitment to allow independent scientists to do any sort of research they wanted with commercially available seeds, as long as they weren’t trying to pirate the technology, and as long as they don’t sell or release the seeds into the wild afterward. If you read these principles [PDF], it sounds like the problem’s solved.

So I asked Shields: How’s that working out?

“If you are at a major agricultural school that’s negotiated an agreement with the companies, it’s working fine,” he said.

Any scientist working at those institutions with agreements is now free to experiment. The catch is that the companies require the universities to sign a further legal agreement, showing that they understand they can’t let researchers pirate the seeds or plant them after the experiment is over.

“Each company has to decide how many universities to make those agreements with,” Shields said. “What justification they have and why they pick one over the other, that’s above my pay grade. It may be that they know there’s a scientist whose work they don’t like, so they don’t choose that university.”

I went back to LaVigne and asked, why not just let all universities do this? He explained that it took a lot of time and lawyerly effort to draft agreements with every university, and some of the smaller companies had made the determination that they just didn’t have the lawyers on staff to contact them all.

But why bring in the lawyers in the first place? Why not just lay out the guidelines and go after anyone who violates them? That was just the decision the companies made, LaVigne said.

Want to guess where Monsanto stands in this? Monsanto has a blanket agreement allowing research at all universities in the United States. And actually, when Shields et al. made their complaint, Monsanto claimed it already had many of these agreements in place allowing independent research.

“Was that true?” I asked Shields. “Could you have been doing research on Monsanto grain?”

“Yes,” he said. “We just didn’t know it. I’m a scientist, I don’t speak legalese. Monsanto gets a lot of pain in the public press, but they are the company that interacts the best with public scientists — they have always been on the forefront of pushing public research forward.”

There was one problem still, he said: Scientists can’t work with seeds before they come on the market. That hampers his ability to make recommendations about which seeds work best under different conditions, or to test for unwanted effects. Remember the study [PDF] that showed that Monarch butterflies might die if they ate too much insect-resistant GE corn pollen? That was technically an illegal study, he said.

Ultimately, though, Shields said, everything I was asking about was a bit of a sideshow. Getting permission to do research is all well and good, but it’s meaningless unless you also are able to get money to do research.

“In my 30 years as a public scientist, there’s been a dramatic erosion of public funding. And that makes science more dependent on private funding. If I want to study something, I have to figure out who I can BS into giving me enough money. And these days everyone wants to invest in a sure thing. The preliminary stuff, the interesting stuff, competitive funding will never pay for it.”

Shields had told me when we started talking that he believed agriculture was going to have to make some spectacular innovations to prevent civilization from “the crash, burn, and starve scenario.” Genetic modification, he said, almost certainly will be a part of that. But, he said, you don’t necessarily get spectacular innovation by following the carrot (and the profits) in front of your nose:

“I think you need to try a lot of crazy ideas, you’re going to get a lot of failure, but you also might just get something big. The problem is it’s getting harder and harder to do that kind of work. Federal, state, institutional funding, it’s all drying up. That scenario is really the bigger risk than anything we’ve talked about.”

I’ll look further down this road soon. Next up, though, because I’ll be on vacation, I’m working on a guide to books about GM food.

Written by: Nathanael Johnson on September 3, 2013.
Last revised by: