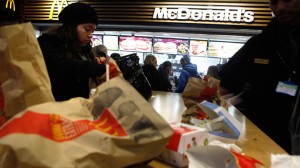 From Mexico to Qatar, obesity rates are soaring to unprecedented levels. The alarming trend is damaging economic performance, as well as the health of millions of consumers worldwide.

Take our increasingly sedentary lifestyles, mix in a generous portion of American fast-food and dubious agricultural practices, add a dash of corporate duplicity and you have a recipe for high obesity rates across the planet.

The newly released United Nations report on global nutrition does not make for very appetizing reading: Amid an already floundering global economy, the reality of a fattening planet is dragging down world productivity rates while increasing health insurance costs to the tune of $3.5 trillion dollars per year – or 5 percent of global gross domestic product (GDP).

31.8 percent of US adults are now considered clinically obese. This is a remarkable figure, especially considering that it is approximately double the US obesity rate registered in 1995, according to data from the Center for Disease Control and Prevention.

An individual is considered obese when their body mass index (BMI), a measurement obtained by dividing a person’s weight in kilograms by the square of the person’s height in meters, exceeds 30 kg/m2, according to the World Health Organization.

Meanwhile, much of the international community is quickly catching up with the global consumption superpower. Mexico, for example, just surpassed US obesity rates with a whopping 32.8 percent of Mexican adults now considered to be clinically obese.

The unprecedented weight gains in Mexico, however, as well as many other countries, appear to be no accident.

Following the passage of the North American Free Trade Agreement (NAFTA), Mexico became the dumping ground for a slew of cheap fast food and carbonated drinks, according to a Foreign Policy report.

Thanks to NAFTA, there was a more than 1,200 percent increase in high-fructose corn syrup exports from the US to Mexico between 1996 and 2012, according to the US Agriculture Department. In an effort to place a cap on the high-calorie drinks, Mexican officials introduced a tax on beverages containing high-fructose corn syrup. American corn refiners, however, cried foul and the tax was voted down by the World Trade Organization.

Yet another disturbing casualty on the obesity trail is tiny Qatar, an oil-rich Arab nation of 250,000 people that is also rich in fast food diets.

“Like most people in the Arab Gulf, (Qataris) were traditionally desert-dwelling and therefore much more physically active,” according to a 2012 report by Policymic.com. “Now, cars have replaced camels and fast food and home deliveries take the place of home cooking. Even housework and child rearing is left to maids and nannies.”

Today, some 45 percent of Qatari adults are obese and up to 40 percent of school children are obese as well. Last month, nutrition experts from around the world shared their views at an obesity and nutrition conference in Sydney. For many of the attendees, the primary culprit in the global obesity scourge is out-of-control corporate power, where the free market decides everything.

The rise of global fast food outlets has been a key change in our environment leading to fattier foods and fatter people, Bruce Neal, professor at the George Institute for Global Health in Sydney, told the Indo-Asian News Service.

“As fast as we get rid of all our traditional vectors of disease – infections, little microbes, bugs – we are replacing them with the new vectors of disease, which are massive transnational, national, multinational corporations selling vast amounts of salt, fat and sugar,  Neal said.

John Norris, writing in Foreign Policy, explained some of the global dynamics that contributed to the so-called “globesity” epidemic, including the soft drink industry’s move to use cheaper high-fructose corn syrup instead of sugar in many of their products.

While some might be tempted to downplay the negative effects of such a harmless sounding additive, researchers from Canada’s University of Guelph, as pointed out by Norris, discovered that a high-fructose corn syrup diet in rats produced “addictive behavior similar to that from cocaine use.”

Americans, thanks in part to First Lady Michele Obama’s ‘Let’s Move’ program, have recently woken up to the unsustainability of their soda guzzling, fast food ways. Other politicians and activists have also weighed in on the debate, making the environment for the fast food industry not as comfortable as in the past.

In March, New York City Mayor Michael Bloomberg attracted the ire of the soft drink industry when he placed a ban on the sale of sodas in sizes larger than 16 ounces. Violators will be fined $200.

In his 2004 a documentary film, “Super Size Me,” Morgan Spurlock stunned audiences by tracking the physical effects on his body – none of them positive – after consuming nothing but McDonald’s food for 30 days. As a result of the experiment, Spurlock gained 24½ lbs. (11.1 kg), a 13 percent body mass increase, and a cholesterol level of 230, among other negative side-effects.

Perhaps the biggest wake-up call for the fast food industry came in 2002 when two teenagers accused McDonald’s of deceptively marketing its menu from 1985 to 2002, causing them, they alleged, to become obese. The judge dismissed the case in 2010, but the message to the industry was crystal clear.

As a result of these and other public awareness campaigns, the American fast food industry – although slower than some may like – has been gradually rewriting their menus and marketing campaigns, many of which are aimed at kids. At the same time, the junk food industry – sensing the sea change of attitudes in the United States as the physical effects of junk food manifests itself – are investing increasingly in foreign markets where public awareness of the subject is not so developed.

Similar to the crackdown on the tobacco industry in the late 1990s, US fast food companies are busy setting up shop abroad for easy, unregulated markets to hawk their wares.

Already the size of their presence is breathtaking: “Coca-Cola and PepsiCo together control almost 40 percent of the world’s $532 billion soft drink market, according to the Economist. Soda sales, meanwhile, have more than doubled in the last 10 years, with much of that growth driven by developing markets. McDonald’s investors were disappointed that the company only turned $1.4 billion in profit during the second quarter of 2013, having become used to years of double-digit gains every three months,” according to the Foreign Policy report.

So while the United States is steadily finding ways to regulate its fast food, soft drink industry, and thus nip the obesity epidemic in the bud, it is, at the same time, legislating on behalf of unhealthy exports abroad.

Now the question is, will the rest of the world bite the hand that feeds?

Written by: worldtruth.tv on September 8, 2013.
Last revised by: