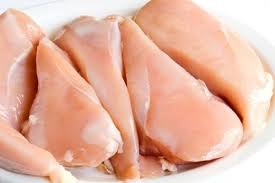 Following the release of a groundbreaking U.S. Food and Drug Administration  (FDA) report back in 2011 indicting roxarsone, the infamous Pfizer-produced  arsenical drug, as a high-level contaminant in conventional chicken meat, the  drug’s manufacturer voluntarily agreed to pull it off the market, leading many  health-conscious individuals to breathe a collective sigh of relief. But a new  study recently published in the journal Environmental Health Perspectives (EHP) reveals that inorganic arsenic is still prevalent in virtually all  conventional chicken meat, as an arsenical drug similar in composition to  roxarsone is still being widely used and fed to conventional  chickens.
Entitled “Arsenical Association: Inorganic Arsenic May  Accumulate in the Meat of Treated Chickens,” the new study explains how  inorganic arsenic (iAs), a known human carcinogen, accumulates in the muscle  tissue of chickens treated with arsenical drugs like roxarsone, the official  brand name of which is 3-Nitro. The previous assumption was that these organic  arsenic compounds pass through chickens unchanged and thus do not pose a  considerable threat to human health. But the FDA study revealed quite the  opposite when it found that roxarsone is capable of transforming into iAs upon  ingestion, where it then accumulates in the edible parts of  chickens.
Since roxarsone is no longer on the market, many people think  that iAs is no longer a major threat in conventional chicken meat. But another  lesser-known arsenical drug, nitarsone, is still quietly being used in  conventional chicken production in the U.S., as explained in a May 11, 2013, piece published by  The New York Times, which means that the threat is still present. For  whatever reason, health officials have been slow to take a closer look at  nitarsone, which exhibits virtually the same effects as roxarsone in treated  chickens.

Nitarsone likely just as dangerous as roxarsone, suggests research, yet both  drugs still have FDA approval

Like roxarsone, nitarsone is given to  conventional chickens to help them grow faster and to treat intestinal parasites  — conventional chicken farms are quite filthy places, after all. The chemical  also gives conventional chicken meat a more  appealing pink color, rather than the unappetizing gray hue it would otherwise  have if left untreated. But just like roxarsone, nitarsone can contribute to  elevated levels of iAs in chickens that eat it, which in turn can lead to  eventual arsenic poisoning  in humans.
For their research, the authors of the new EHP study  evaluated conventional, conventional but antibiotic-free, and certified organic  chicken meat for iAs. They found that cooked conventional chicken meat had the  highest levels of iAs, averaging 1.8 micrograms per kilogram, while cooked  organic chicken meat had the lowest levels of iAs, averaging 0.6 micrograms per  kilogram. Worse, chicken meat with detectable levels of actual roxarsone had  higher levels of iAs overall compared to chicken meat without detectable levels  of roxarsone.
“Our study gives the FDA a clear rationale for withdrawing  its approval for roxarsone and potentially other arsenic-based drugs in animal  agriculture,” wrote Keeve Nachman, lead author of the study and director of the  Farming for the Future program at the Johns Hopkins Center for a Livable  Future.
If nitarsone is essentially the same as roxarsone in how it  affects chickens, then it too should be pulled from the market for public  safety. At this time, however, nitarsone is still available for use in  conventional agriculture, which means it is highly likely that most or all  conventional chicken meat is still being intentionally contaminated with  arsenic. And the FDA has yet to officially ban either roxarsone or nitarsone,  even though roxarsone is no longer being produced.
“[This study] provides  FDA with good data about whether it should formally withdraw the use of  arsenicals from chicken production in the U.S.,” adds Amy Sapkota, an assistant  professor at the University of Maryland School of Public health who was not  involved in the study.