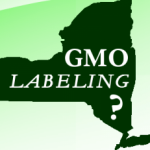 Under the proposed law, any unlabeled food product containing more than 9/10th of 1% of total weight of genetically engineered material would be mis-branded and subject to punishment.

The twin bills introduced in the New York State Assembly and Senate, however, provide for a number of exemptions. One such carve out exempts from the labeling requirement food from animals fed GMO feed or treated with GMO vaccines. Other exemptions are for raw agricultural commodities unintentionally contaminated by GMOs and for alcoholic beverages.

GMO Free NY, a group of volunteers passionate about the issue, in conjunction with their partners at Food & Water Watch, NOFA-NY, and the Center for Food Safety, is working with state legislators and consumers to bring the Assembly and the Senate bills — currently in committees — to a floor vote before the legislation session ends on June 20 and the bills expire.

Stacie Orell, GMO Free NY’s campaign director, urges New Yorkers to contact all members of the Senate Consumer Protection Committee, and members of the Committee on Consumer Affairs and Protection in the Assembly to encourage the members to co-sponsor the bills and approve them for a floor vote. New Yorkers can also let their local representatives know that they support the GMO labeling legislation.

Public voices can make a big difference on this issue. If the bills are not reported out of the committees for a floor vote, then they are dead “for the duration of this two-year term and must be reintroduced anew in 2015,” explains Orell.  If, however, the committee leadership refers the bills to another committee or they are reported for a floor vote but that does not occur before June 20th, they “will be considered again and/or voted on once legislators return to Albany in January 2014,” adds Orell.

Orell told GMO Journal that “it’s time for Americans to gain the same right to know whether their food has been genetically modified as the citizens of 64 other nations already have. And in the absence of an FDA mandate to label, it’s been left up to the states to enact legislation.”

GMO Free NY is part of a nationwide movement “to give Americans the right to know when GMOs are in our food. Moms, dads, kids, scientists, farmers, grocers, food producers – ALL OF US WHO EAT FOOD – will benefit from state-level efforts to mandate GMO labeling.” (emphasis in the original).

The Assembly Bill (A3525) was introduced by Linda B. Rosenthal and currently has 50 co-sponsors. The Senate bill (S3835) is sponsored by Kenneth LaValle and has 4 co-sponsors.

Written by: Deniza Gertsberg on September 17, 2013.
Last revised by: