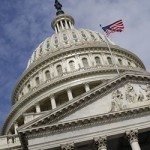 Now, Congress is about to vote on a new Continuing Resolution (H.J.RES.59) in order to fund the government for another three months. And despite public outrage and hundreds of thousands of signatures on petitions, House Appropriations Committee Chair Rep. Harold Rogers (R-Ky.) has slipped the Monsanto Protection Act into the new bill.

The Monsanto Protection Act is nothing but a gift to the biotech industry. It’s an affront to farmers and consumers. It gives the biotech industry a free pass to grow crops that have not been adequately safety tested. It also threatens farmers who potentially could be shut off from markets abroad when their non-GMO crops are contaminated.
After a huge public uproar in opposition to the Monsanto Protection Act, Sen. Jeff Merkley (D-Ore.), tried to repeal it though an amendment to the Farm Bill. Sen. Thad Cochran (R-Miss.) blocked the vote on Merkley’s amendment. But Sen. Debbie Stabenow (D-Mich.), the Agriculture Committee Chair with the final say on agriculture issues in the Democrat-controlled Senate, offered a compromise in the form of a promise that she would work to ensure that the Monsanto Protection Act wouldn’t be renewed without a vote.
We hope Sen. Stabenow will keep her promise. But we need to remind her, and all of our members of the Senate, that the Monsanto Protectio Act needs to go.
Please write your Senator and urge them to vote NO on the Continuing Resolution unless the Monsanto Protection Act is removed!
BioPrepper.com
Source:http://salsa3.salsalabs.com/o/50865/p/dia/action3/common/public/?action_KEY=11998