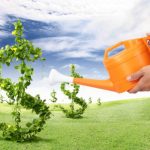 Harn Soper has a real-world laboratory to test the benefits of farming with genetically modified (GM) seed. Soper’s family owns seven farms near Emmetsburg, Iowa, with organic crops on 410 acres and GM crops on some 300 acres. The farms are all in the same microclimate: If a torrential cloudburst hits one farm, it hits them all. So Soper can compare the economics of one farming style against the other. And it’s clear, when the numbers are tallied, that he’s making a lot more money farming organically than farming with GM seed.

Last week, I looked at GM farming from a 10,000-foot perspective and found that big farmers in the U.S. seem to have benefited from biotech crops. Now I’m looking at a couple of these farms from the six-foot perspective (that’s eye-level for me), and trying to understand what leads an individual farmer to choose GM seed. I emailed or chatted with farmers until I started to hear the same explanations over and again.

For the sake of concision I’ll just focus on a couple people here: Soper and Brian Scott. These guys aren’t intended to be perfectly representative of the big picture (the 10,000-foot view is better at capturing that) — I’m just going to present their decision making in more fine-grained detail.

And looking closely reveals something surprising: I’d thought that there would be an obvious financial advantage in biotech, making it impossible for conventional crops to compete. But that’s not the case. In the race toward profitability, GM traits don’t give seeds a jet-pack — it’s more like they provide an umbrella.

Before I got in touch with Soper, he’d already been going over his books and comparing the economics of his GM and organic land for the past few years. In the spring, the GM crops start out way behind, mostly because the seed is so expensive: It costs about $200 an acre to plant and fertilize corn. For the organic land, by contrast, seed and manure costs about $100 an acre. At harvest the organics slipped a bit: The GM corn produced 200 bushels an acre, versus 180 bushels on an organically farmed acre. But in sales, the organic land surged ahead again.

“Our GM farm rides a roller coaster where grain traders play the system betting long or short on the value of our crops,” Soper wrote in an email. “As of today (8/22/13) the swing in September corn is between $5.27 and $4.47 a bushel. Welcome to Las Vegas. This compares to our contracts for our fall delivery of organic corn at $12 a bushel.”

The organic land makes less money in the off years of the typical one-year-on, one-year-off rotation, when the farmers grow alfalfa and oats, instead of the soy they grow on the GM farms. Soy is clearly more profitable, but not so profitable as to erase the lead from organic corn, Soper said:

“On a two-year average, organic is still way ahead. The bottom line was that our organic farms have 30 percent higher profits.”

There are a lot of costs, however, that Soper ignores in his calculation. That’s because the Soper family is an absentee landlord: The Sopers contract with farmers who work the land. The farmers and the Sopers split the costs of seed and fertilizer in the spring, and then split the profits in the fall. That means that Soper’s books don’t include anything on the amount of extra labor farmers have to contribute, and he doesn’t see the costs of dealing with insects (whether through conventional pesticides or organic treatments) if there’s an infestation.

That’s a big omission. For a farmer who actually gets dirt under his fingernails, like Brian Scott, the extra time and money to get a crop to harvest make a big difference. And that’s where GM crops seem to prove their worth to farmers: They’re a bit more predictable and easier to manage. They’re a convenience.

Scott lives (and blogs) on a farm in northwest Indiana, where he and his family grow wheat, corn, soybeans, and popcorn. He recently paid $119 an acre for his GM corn (for the seed alone) as opposed to $87 an acre for conventionally bred corn. The yields, he said, are “pretty well equal.”

“All right,” I said, “walk me through your other input costs.” I poised pen over notebook to jot down all the extra costs that would be unnecessary in the biotech fields.

“Well, all the other costs are the same,” he said.

That didn’t make any sense. If everything is the same but the seed cost, I asked, why not just buy the cheaper non-GMO seed?

With a little more number crunching Scott estimated that cheaper conventionally breed corn seed would actually make him $11 more per acre if nothing goes wrong. But something always goes wrong. With GM seeds he’s less likely to have a devastating loss — so much so that his insurance company gives him a lower premium.

Another Indiana farmer, Troy Rausch, concurred: “If you use GMOs it takes a lot of the risk away. When everything is ideal non-GM seed is probably better. But when you are delayed by a couple weeks by rain like we were this year, the GM traits come in awfully handy for weed control.”

All the farmers I talked to said that the potential yield for GM and non-GM seed is the same. But, Scott said, in practice GM yield is usually higher. Each of the two main GM traits — insect resistance and herbicide resistance — insure that yields don’t fall too far below their potential.

When corn rootworms start eating Scott’s conventional crop, they will do some damage before he can react and spray pesticide. But they won’t damage the insect-resistant GM corn, because the pesticide is always there, in the plant. In addition, Scott said, pest-resistant GM corn allows a greater diversity of insects in the field because he sprays much less. The pesticide in the GM corn itself can harm only a small subset of insects, and this allows beneficial insects to prosper.

The other major GM trait, herbicide tolerance, saves Scott some money because it allows him to use a cheap herbicide (glyphosate) on soybeans, and it reliably stops weeds before they do any damage. And having the option of using different herbicides allows him to change his methods more often: He’ll use glyphosate one year, simply turn a little soil with a cultivator the next, and then maybe use a different herbicide, like glufosinate. The more he changes things up, the less likely he is to help weeds evolve resistance.

All the farmers I spoke with said they are starting to see pests that are resistant to the advantages conferred by genetic engineering. This isn’t cutting into their bottom line yet: They all happened to work in the northern U.S. where herbicide-resistant weeds are less of a problem than in the south. Nonetheless, many told me that farmers they know are turning back to non-GM seeds, because they might make more money that way.

Soper thinks that’s just the beginning. He makes so much more with organics, and the organic market is growing so quickly that, sooner or later, other farmers are going to cash in on the opportunity.

“I think there will be a big shift to organics in 15 to 20 years. Input costs for GMO farming just keep rising — seed costs, pesticide costs. I just don’t think it’s sustainable.” He chuckled: “There you go — it’s all about sustainability. Economic sustainability in this case.”

So why do farmers buy GM seeds? Basically, GMOs make things easier. Instead of rushing to spray herbicide in the busy spring planting season before the soybean sprout, they can wait until things calm down. That means one farmer can do more in less time.

There’s a problem with this efficiency: GM seed can enable irresponsible farmers to work fast and dirty across huge stretches of land. A farmer could make a lot of money by simply planting GM corn every year and spraying liberally with glyphosate. On the other hand, a responsible farmer can use GM traits sparingly as a tool for land stewardship. I’ll explore that in my next post, where I’ll look at the effect GM crops have on the environment.

Written by: Nathanael Johnson on September 26, 2013.
Last revised by: