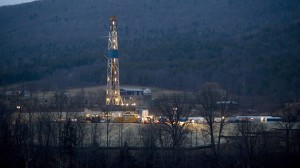 Researchers have found high levels of radioactivity, salts, and metals in water and sediment located downstream from a treatment facility which processes fracking wastewater from oil and gas production sites in Pennsylvania’s Marcellus shale formation.

A Duke University team analyzed water and sediment samples from  the Josephine Brine Treatment Facility in Indiana County,  Pennsylvania, finding radium levels 200 times greater than  samples taken upstream from the plant and far higher than what’s  allowed under the Clean Water Act.
Radium is a radioactive metal that can cause diseases like  leukemia and other ill-health effects if one is exposed to large  amounts over time.
The treatment facility processes flowback water – highly saline  and radioactive wastewater that resurfaces from underground after  being injected into rocks in the fracking, or hydraulic  fracturing, process.
Fracking is the extraction of oil and gas by injecting water to  break rock formations deep underground. Use of the process has  increased rapidly in the US in recent years, yet scientists who  have studied the practice warn of climate-damaging methane emissions and radioactive effects that come  with it.
The study was published Wednesday in the Environmental Science  and Technology journal. It focuses on two years of tests on  wastewater flowing through Blacklick Creek from oil and gas  production sites in western Pennsylvania’s Marcellus shale  formation.
For two years, the Duke team monitored sediment and river water  above and below the treatment plant, as well as discharge coming  directly from the plant, for various contaminants and levels of  radioactivity. In the discharge and downstream water, researchers  also found high levels of chloride, sulphate, and bromide, which  can interact with chlorine and ozone – used to disinfect river  water for drinking -to create a toxic byproduct.
“The treatment removes a substantial portion of the  radioactivity, but it does not remove many of the other salts,  including bromide,” said study co-author Avner Vengosh, a  Duke professor of geochemistry, adding that traditional  facilities like Brine aren’t made to remove these contaminants.
Though the Brine treatment facility strips some radium from  fracking wastewater, high levels of metal still accumulate in  sediment.
“The occurrence of radium is alarming – this is a radioactive  constituent that is likely to increase rates of genetic mutation”  and can be “a significant radioactive health hazard for  humans,” said William Schlesinger, a researcher and president  of the Cary Institute of Ecosystem Studies, who wasn’t involved  in the study.
Researchers believe the contaminants come from fracking sites  because the Brine facility treats oil and gas wastewater which  has the same chemical features as rocks in the Marcellus shale  formation.
Some fracking wastewater is shipped by oil and gas companies to  treatment plants like Brine to be processed and released into  waterways. But most wastewater is reused for more fracking, Lisa  Kasianowitz, an information specialist at the Pennsylvania  Department of Environmental Protection, told ClimateCentral.org.
Kasianowitz said the treatment facility is handling   “conventional oil and gas wastewater in accordance with all  applicable laws and regulations.”
Vengosh said that the research indicates that similar  contamination may be happening around other fracking locations  along the Marcellus shale formation in Pennsylvania, Ohio, and  New York.