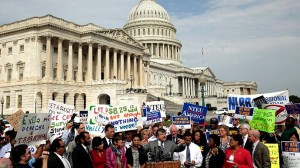 The Republican-led US House of Representatives unanimously voted to approve a bill which will see 800,000 workers furloughed during the ongoing partial government shutdown paid once the crisis ends.

The 407-0 vote in the House was a rare moment of bipartisanship  within the deeply divided lower house of Congress.

The measure will now be sent to the Senate, which is controlled by the Democrats. The White House announced that President Barack Obama will sign the measure into law once it passes Congress.

“This is not their fault and they should not suffer as a  result,” Rep. Elijah Cummings, D-Md., said of federal  workers. “This bill is the least we should do. Our  hard-working public servants should not become collateral damage  in the political games and ideological wars that Republicans are  waging.”
Rep. Michael Turner, R-Ohio, said federal workers should not have  to worry about paying their bills while the Congress and the  White House battle over funding the government.
“They have child care expenses, house payments to make, kids  that are in college, and while the president refuses to  negotiate, while he’s playing politics, they shouldn’t worry  about whether or not they can make ends meet,” Turner said.

In the 1995-96 government shutdowns, furloughed workers were  retroactively paid their salaries in full.

Republicans plan to introduce piecemeal budget votes over the  weekend which would see symbolic funding granted to additional  public services. If approved, the National Weather Service, the  Federal Emergency Management Agency (Fema) and child nutrition  and development programs could be reopened.
Democrats are likely to vote down the stopgap measures, however,  which they view as part and parcel of the Republican strategy to  shift blame for the shutdown away from the GOP, which has been  accused of holding the White House ransom over healthcare  reforms.

The shutdown ensued after House Republicans failed to come to an  agreement with Democrats with regards to passing the federal  budget. It was sparked by the GOP’s reluctance to accept  President Barack Obama’s Affordable Care Act, or “Obamacare,”   which finally went into effect Tuesday morning amid the  shutdown. On Saturday, President Obama called on the House to “stop this  farce” and end the US government shutdown by unconditionally  approving a federal budget.

“Take that vote. Stop this farce. End this shutdown now,”  Obama said in his weekly radio and video address.

Earlier in the day, US Secretary of State John Kerry warned the  partial government shutdown could weaken the United States’   global standing.

“If it were prolonged, or repeated, people would begin to  question the willingness of the United States to stay the course  and its ability to, but that’s not the case and I don’t think it  will be the case,” Kerry told journalists at the Asia-Pacific  Economic Cooperation forum in Indonesia’s Bali.

He continued that Congress should think “long and hard” about the  message the US was sending to the world when “we can’t get our  own act together.”

Kerry called on lawmakers to “end it now, end it today.”

President Barack Obama had planned to attend the summit of Asian  leaders, but canceled his travel plans to remain Washington and  deal with the shutdown, which entered its fifth day on Saturday.  Kerry is now heading the US delegation in the talks.

‘This isn’t some damn game’

Public opinion has placed  responsibility for the shutdown at the Republican’s feet,  reducing the debate over the government shutdown to allegations  and recriminations that both sides are seeking to prolong the  crisis for political advantage.

Republicans jumped on off-the-record quotes in the Wall Street  Journal which allegedly showed the White House was prepared for a  protracted battle.

“… It doesn’t really matter to us [how long the shutdown  lasts] because what matters is the end result,” the paper  cites a senior administration official as saying.

“This morning I get out the Wall Street Journal out and it  says: ‘We don’t care how long it lasts because we [the Democrats]  are winning’,” said House Speaker John Boehner. “This  isn’t some damn game. All we are asking for is to sit down and  have a discussion.”

Although it remains unknown if the anonymous quote in the Wall  Street Journal reflects on the actual Obama administration  position, the White House and Democrats remain firm that they  will only negotiate with Republicans after the government is  reopened and the $16.7 trillion debt limit is raised.