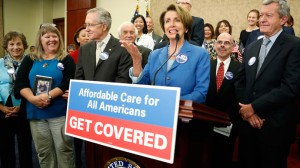 Millions of Americans visited newly launched websites last week to learn more about the benefits offered through the president’s health insurance mandate, but Obamacare is apparently not ready for everyone.

Americans officially became able to sign up for insurance  coverage provided through President Barack Obama’s Affordable  Care Act program Tuesday morning, but a number of issues have  impacted the amount of people who are actually able to sign up  for so-called Obamacare.

Heavy traffic early in the week caused many of the websites to  reportedly crash, but complications are continuing to plague some  pages. A report conducted by CNBC suggests that as few as one  percent of those online applications were actually submitted  correctly.

“As few as 1 in 100 applications on the federal exchange  contains enough information to enroll the applicant in a  plan,” CNBC health care reporter Dan Mangan wrote Friday.

According to several insurance industry sources who spoke to CNBC  during the first week of Obamacare’s roll-out, a number of  complications are causing the vast majority of submitted  applications to be absent of the information necessary to  implement coverage.

But while user error would presumably be the main culprit, some  experts are saying the websites established to register Americans  for the president’s health care plan were brimming with internal  problems.

“It is extraordinary that these systems weren’t ready,”  Sumit Nijhawan, CEO of Infogix, told CNBC.

According to Nijhawan, whose company handles data processing for  insurers such as WellPoint and Cigna, there will be a “public  relations nightmare” if the Obama administration can’t  correct the issues that are complicating the sign-up process. If  a large number of people wrongly believe they have new insurance  when it officially goes into effect in January, he said, the  response could be damaging for the White House.

“One hundred people submit their application, one of them goes  all the way through the processing … a big chunk of them are  being held,” Infogix Chief Product Officer Bobby Koritala  added to CNBC. “They need to get more clarifying  information.”

Dan Mendelson, the CEO of consulting firm Avalere Health, added  to Mangang’s report that he wasn’t surprised by the 1-in-100 rate  cited by Nijhawan.

“This is not a traffic issue,” Mendelson said. “Right  now, the systems aren’t working.”

Dan Schuyler, director of the consultancy Leavitt Partners, added  that “If we continue to see these issues through the next  three or four weeks there’s a lot of concern about how many  people will have effective coverage by Jan. 1.”

According to the New York Times, around 8.6 million people  visited the new Obamacare websites last week. Before long,  however, the Department of Health and Human Services had to take  the website down during off-leak hours in order to provide  “significant improvements in the online consumer  experience.”

“We have built a dynamic system and are prepared to make  adjustments as needed and improve the consumer experience,”  HHS spokeswoman Joanne Peters said in a statement.
Rep. Eric Cantor (R-Virginia), the second-highest ranking  Republican in the House of Representatives, said in a statement  of his own that “Americans have seen once again that Obamacare  is not ready for prime time.”

“We have been warned time and time again that ObamaCare is not  ready for prime time,” independently added Rep. Tim Huelskamp  (R-Kansas). “Well, it turns out that is right.”

Republican efforts to stall Obamacare largely led to the  government shutdown that started last Tuesday morning. GOP  members of the House opposed approving any budget that funds the  health insurance program, but Obamacare rolled out regardless  early Tuesday just as hundreds of thousands of federal workers  became furloughed over Congress’ failure to pass a spending bill.

According to the White House, healthcare.gov was visited by one  million unique visitors within hours of its launch last week.  Americans have until Dec. 15 to enroll in the president’s health  insurance plan.

“In the first week, first month, first three months, I would  suspect that there will be glitches,” Pres. Obama told NPR  recently. “This is 50 states, a lot of people, signing up for  something. And there are gonna be problems.”