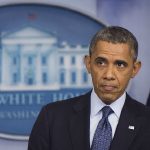 There have been so many lies flooding out of Washington lately that’s it’s hard to keep up with them all, much less rebut them. But let’s tackle as many as we can today.

And let’s start with a lulu that took place last week, when Barack Obama was interviewed on CNBC. John Harwood asked him about the appropriateness of some of the recent Presidential rhetoric. In his reply, Obama said, “I think it’s fair to say that during the course of my Presidency I have bent over backwards to work with the Republican Party, and have purposely kept my rhetoric down.”

Can you believe it? The most divisive, vitriolic, partisan President we’ve had in years claims that he has “bent over backwards” to work with Republicans and that he’s actually “kept my rhetoric down.” Calling your opponents extortionists, arsonists, extremists and other choice epithets is apparently Obama’s idea of keeping his rhetoric down.

After hearing his ludicrous claim, I looked very closely at my TV screen. To my amazement, Obama’s nose didn’t grow a bit. It should have shot out so far that it knocked his interviewer off his chair.

His Treasury Secretary, Jack Lew, has repeated the same nonsense, saying “until very recently, Congress typically raised the debt ceiling on a routine basis… the threat of default was not a bargaining chip in the negotiations.”

The truth is exactly opposite of Obama’s claims. Time and time again, Congress has demanded — and gotten — compromises from whoever was sitting in the White House (whether Republican or Democrat) before agreeing to raise the debt ceiling. According to the Congressional Research Service, Congress raised the debt ceiling 53 times between 1978 and today. Of those, in only 26 cases, or less than half of the time, were no conditions attached.

Even in cases where other stipulations were included in the debt increase, some members of Congress refused to go along with the deal. Such was the case in 2006, when then-Senator Obama voted against raising the debt limit. Listen to what the two-faced dissembler said back then:

The fact that we are here today to debate raising America’s debt limit is a sign of leadership failure. It is a sign that the U.S. government cannot pay its own bills. It is a sign that we now depend on ongoing financial assistance from foreign countries to finance our government’s reckless fiscal policies. Increasing America’s debt weakens us domestically and internationally. Leadership means that “the buck stops here.” Instead, Washington is shifting the burden of bad choices today onto the backs of our children and grandchildren. America has a debt problem and a failure of leadership. Americans deserve better.

I couldn’t have said it better myself. We do deserve better. By the way, when the hypocritical Obama delivered those remarks, the debt ceiling was being raised to $8.965 trillion. Today, after five years of his trillion-dollar annual deficits, the debt ceiling stands at $16.7 trillion. And that’s not high enough for the big spenders in his administration. Talk about putting more burdens “onto the backs of our children and grandchildren.”

But the battle over raising the debt ceiling is just one area where we are being deluged with lies. Another is Obamacare. Remember all those Presidential promises that the measure would lower premiums for most Americans — and that if you liked your present health insurance, you could keep it? Turns out (surprise, surprise) neither one of these Presidential promises is true.

Now that the program has officially been launched, it’s turning out to be even more of a disaster than its worst critics predicted. The program’s apologists claimed that the system suffered repeated and near-total crashes on its Oct. 1 launch day because of its popularity. “[I]t’s sort of a great problem to have,” gloated Kathleen Sebelius, the Secretary of Health and Human Services. Hardly.

The Covered California website claimed that it got more than 5 million hits on Oct. 1. Turns out that the number was inflated by more than 4 million; the actual count was 645,000.

And how many of those folks actually signed up for the government-mandated health insurance? Oops, supposedly the administrators won’t be able to get that information to us for a few more weeks.

What a crock! Of course, they can tell, minute by minute and second by second, exactly how many people have signed up. Can you imagine any private business trying to tell you that it doesn’t know how many orders its website has logged? (And a lot of those handle far more transactions every hour than even the most glowing claims for the ones taking orders for Obamacare.)

The fact that they won’t tell us how many sign-ups they’ve received suggests that the number is incredibly low. How low? Well, in at least some States, the number of successful applicants on Day One seems to be… zero. Yes, that’s even true of Sebelius’ home state of Kansas. My, that’s got to be a bit embarrassing.

So a system that took three years to create and cost untold millions of dollars can’t even tell how many orders it received? If that had been a private business, you can bet that heads would have rolled the next day. But in government, there is no penalty for failure — at least not on the participants. It’s only the taxpayers who have to cough up the dough to pay for all of this. And pay and pay and pay.

The final Big Lie I want to mention this morning concerns all of those “catastrophic consequences” that will occur if Congress doesn’t raise the debt ceiling by next Thursday. Of course that is absolute bunk. No matter what happens in the current standoff between the White House and the Congress, billions of tax dollars will continue to flow into the Federal Treasury every day. There will be enough money to pay every penny of interest on the national debt many times over.

Yes, there will be a shortfall between how much money the Federal government receives and how much it wants to spend. But if government expenditures could be cut back to what they were when Obama first assumed office, we wouldn’t have to borrow a single dollar to pay them. Just think of it: Washington could be forced to live within a budget. Wouldn’t that be wonderful?

The assertion that the United States will have to default on its debt is just one of the many big lies Obama and his supporters are using, in a heavy-handed effort to browbeat Congress into giving them what they want.

But there are encouraging signs that more and more Americans are catching on to how we’re being played for suckers. According to the latest polls, a majority of Americans are ready to say “no more!” to automatically raising the debt ceiling without significant spending cuts.

Let’s hope they’ll remember this next November, when we’ll get a chance to replace a lot of the folks who are pushing us closer and closer to fiscal disaster. Topping the list for me is Senate Majority Leader Harry Reid. Wouldn’t it be wonderful to see him forced to retire?

Until next time, keep some powder dry.