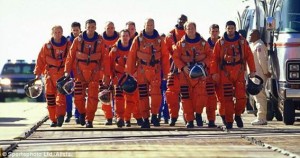 We are within weeks of what may be humankind’s most dangerous moment and it is coming just as the greatest credit bubble in history is about to pop. Images of the movie Armageddon, with Bruce Willis, have been hanging like a cloud over me. In the movie, everyone on earth was watching to see if Willis would succeed in blowing up the incoming asteroid. If he and his team failed, everyone on earth was going to die so everyone was paying attention and praying for salvation.

The most dangerous situation humanity has  ever faced is upon us and no one is watching. Only a few have reported on what is about to happen starting in  November. The operation, to remove 400 tons of highly irradiated spent  fuel beneath the plant’s damaged Reactor No. 4, could set off a catastrophe  greater than any we have ever seen, independent experts warn. An operation of  this scale, says plant operator Tokyo Electric Power Company, has never been attempted  before, and is fraught with danger.

The New York Times reports, “Thousands of workers and a  small fleet of cranes are preparing for one of the latest efforts to avoid a  deepening environmental disaster that has China and other neighbors  increasingly worried: removing spent fuel rods from the damaged No. 4 reactor  building and storing them in a safer place.”

The Japan Times writes, “In November, Tepco plans to  begin the delicate operation of removing spent fuel from Reactor No. 4 [with]  radiation equivalent to 14,000 times the amount released by the Hiroshima  atomic bomb. Removing its spent fuel, which contains deadly plutonium, is an urgent task. The  consequences could be far more severe than any nuclear accident the world has  ever seen. If a fuel rod is dropped, breaks or becomes entangled while being  removed, possible worst-case scenarios include a big explosion, a meltdown in  the pool, or a large nuclear fire. Any of these situations could  lead to massive releases of deadly radionuclides into the atmosphere, putting  much of Japan — including Tokyo and Yokohama — and even neighboring countries  at serious risk.”

The operator of Japan’s  crippled Fukushima nuclear plant is preparing to remove 400 tons of highly irradiated  spent fuel from a damaged reactor building. Containing more than 1,300 used  fuel rod assemblies packed tightly together they need to be removed from a the  third floor of a building that is vulnerable to collapse, should another large  earthquake hit the area.

Tepco expects to take about a year  removing the assemblies. Each fuel rod assembly weighs about 300 kilograms (660  pounds) and is 4.5 meters (15 feet) long. Spent fuel rods also contain  plutonium, one of the most toxic substances in the universe.

Former U.N. adviser Akio Matsumura calls  removing the radioactive materials from the Fukushima fuel pools “an issue of  human survival”. Mycle Schneider and Antony Froggatt said recently in their World Nuclear Industry Status Report 2013, “Full release from the  Unit-4 spent fuel pool, without any containment or control, could cause by far  the most serious radiological disaster to date.”

The operation, beginning this November at  the plant’s Reactor No. 4, is fraught with danger, including the possibility of  a large release of radiation if a fuel assembly breaks, gets stuck or gets too  close to an adjacent bundle. Removing the rods from the pool is a delicate task  normally assisted by computers, according to Toshio Kimura, a former Tepco  technician, who worked at Fukushima Daiichi for 11 years. “Previously it was a  computer-controlled process that memorized the exact locations of the rods down  to the millimeter and now they don’t have that. It has to be done manually so  there is a high risk that they will drop and break one of the fuel rods,”  Kimura said.

Japan’s former Ambassador to Switzerland,  Mr. Mitsuhei Murata stated that if the 1,535 fuel rods in the spent fuel pool  100 feet (30 meters) above the ground—collapses it will affect the common spent  fuel pool containing 6,375 fuel rods, located some 50 meters from reactor 4. In  both cases the radioactive rods are not protected by a containment vessel;  dangerously, they are open to the air. This would certainly cause a global  catastrophe like we have never before experienced. Such a catastrophe would  affect us for centuries.

Hiroshi Tasaka, who has a doctorate in nuclear  engineering and is now a professor at Tama University said, “The biggest risk  during the meltdown crisis wasn’t the reactors themselves but the spent fuel  pools sitting atop them, particularly the one above reactor 4, which still  contains about 1,500 nuclear fuel assemblies. I would say the crisis opened  Pandora’s box.”

A  spent fuel pool. Highly radioactive  “spent fuel rods” must be kept submerged under at least 20 feet of constantly  circulating cold water for at least five years after being removed from the  reactor core

The infrastructure to safely remove this  material was destroyed as it was at the other three reactors. Spent reactor fuel  cannot be simply lifted into the air by a crane as if it were routine cargo. In  order to prevent severe radiation exposures, fires and possible explosions, it  must be transferred at all times in water and heavily shielded structures into  dry casks.

Arnie  Gundersen, a  veteran U.S. nuclear engineer and director of Fairewinds Energy Education, who  used to build fuel assemblies, has a lot to say about what we all have to live  through during the next year. “They are going to have difficulty in removing a  significant number of the rods. There is a risk of an inadvertent criticality  if the bundles are distorted and get too close to each other. The problem with  a fuel pool criticality is that you cannot stop it. There are no control rods  to control it. The spent fuel pool cooling system is designed only to remove  decay heat, not heat from an ongoing nuclear reaction. The rods are also  vulnerable to fire should they be exposed to air. I think they’re belittling  the complexity of the task. If you think of a nuclear fuel rack as a pack of  cigarettes, if you pull a cigarette straight up it will come out — but these  racks have been distorted. Now when they go to pull the cigarette straight out,  it’s going to likely break and release radioactive cesium and other gases,  xenon and krypton, into the air. I suspect come November, December, January  we’re going to hear that the building’s been evacuated, they’ve broke a fuel  rod, the fuel rod is off-gassing.”

“I suspect we’ll have more airborne  releases as they try to pull the fuel out. If they pull too hard, they’ll snap  the fuel. I think the racks have been distorted, the fuel has overheated — the  pool boiled – and the net effect is that it is likely some of the fuel will be  stuck in there for a long, long time. The net effect is they have the bundles  of fuel, the cigarettes in these racks, and as they pull them out, they are  likely to snap a few. When you snap a nuclear fuel rod, that releases  radioactivity again, so my guess is, its things like krypton-85, which is a  gas, cesium will also be released, strontium will be released. They’ll probably  have to evacuate the building for a couple of days. They’ll take that  radioactive gas and they’ll send it up the stack, up into the air, because  xenon can’t be scrubbed, it can’t be cleaned, so they’ll send that radioactive  xenon up into the air and purge the building of all the radioactive gases and  then go back in and try again,” concluded Gundersen.

All the resources of humanity need to be mustered  and focused on the fuel pool at Fukushima Unit 4. There is doubt that even such  a concerted effort would have the scientific, engineering or financial  resources to handle it. It is a national security matter for the United States,  being directly downwind as it is, but the American president would rather go to  war with Syria and much of the rest of the world and the congress would rather  stop his Obamacare even at the risk of shutting down much of the American  government. This crisis comes just as the Obama Administration is trying to  provide a $8.3 billion loan to build the first new nuclear plants in the U.S.  in almost 30 years. What kind of ironic insanity is that?

The absence of media attention and focus reveals  how much in the matrix the masses of humanity are, led by arrogant people whose  stupidity knows no end. We are in the worst hands imaginable, ones who have the  most difficult time imaginable admitting fault or mistake.

Special Note: Now that we have really blown it on the nuclear  front, why don’t we call on the alien races that now officially are declared to live among us to help us in our  need? If they are supposed to be so superior let them go over to Fukushima and  clean up the mess. What trip they are into playing hide and seek with us is  beyond me but the game is over and all intelligent life on this planet needs to  come together to not let the worst-case scenario in Fukushima happen.

Perhaps these alien races have been trying hard to  save us from ourselves (I don’t see much evidence of any success with that.  At the minimum we (through prayer), our  governments, militaries, engineers and scientists, need to come together in a  Manhattan Project (but this time definitely not led by the United States  government) to do everything possible to protect future generations from a  nuclear nightmare that only plutonium can bring.