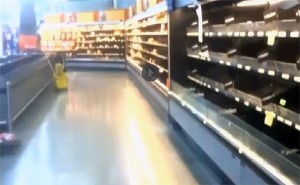 Many of us have heard, seen, or read about the Electronic Benefits Transfer (EBT) system glitches this weekend, and the havoc that the situation brought about many regions throughout the United States. It has been a reaffirmation of how quickly things would become desperate and chaotic if we were to experience a collapse of systems which support life as we know it today.

Today’s EBT system (cards), disguise what would likely otherwise look similarly to the food lines of the Great Depression.

While Walmart in Springhill and Mansfield Louisiana were experiencing EBT system glitches, word spread that they were accepting EBT card transactions — with no limits (an obvious glitch). People swarmed into Walmart and completely cleared the shelves of food and supplies, apparently within hours.

As the EBT glitches began to resolve such that the system began recognizing the EBT purchase limits, people abandoned their carts of heaping food and supplies in the aisles, and left the building.

There are many stories and reports in the news, websites and blogs regarding the panic which set in amongst the many tens of millions of people who rely on government (EBT system) assistance for food and supplies. My takeaway from all this includes the following observations…

1. There are opportunistic people who will quickly disregard civility when the opportunity presents itself for personal gain.

2. There is an astounding number of people who literally rely upon ‘free’ gov’t handouts to survive. They make lots of noise when that handout stops, even for a few hours.

3. The EBT system glitches CLEARLY illustrate that the pandemonium will begin within HOURS, not days, following systemic collapse.

4. Here’s my big takeaway from all this… it’s not just the EBT card holders who will be the problem following a systemic collapse — it will be nearly EVERYONE around you. Nearly ALL OF US rely on ‘the system’ in one way or another. Just because you and I might not have an EBT card does not mean that those among us will not behave like them. This minor EBT system glitch was just a microcosm of the social chaos which will grip the nation…