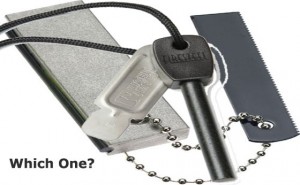 We all know (should know) that the ability and means to start a fire is paramount in a survival situation. Rather than depending on just matches or a lighter, a common (and highly recommended) fire starter is either the magnesium fire starter or the Swedish fire steel.

The thing is, one of them is much better than than the other for survival and/or your emergency kit. Here’s which one…

may be the best option to start a fire when everything else that you’ve tried has failed. This type of fire starter will give you a chance to get a fire started even when you’re in a damp or windy environment. This is because in addition to your own tinder and kindling that you should be using, the magnesium fire starter includes its own ‘tinder’ as part of the product itself — the magnesium.

The fire starter is made out of magnesium, which is a soft and flammable metal. It can be cut and shaved with a knife. It typically comes with a small steel hacksaw blade attached to facilitate scraping the magnesium as well as the striker-bar. A flint/striker-bar is embedded into one side of the magnesium block.

Using it is easy. You scrape off (shave off) some of the magnesium into a small pile of shavings with the hacksaw blade or with a knife, etc. Then you ignite the shavings by sparking the flint (using your knife, blade, etc.) towards and onto the pile. Don’t worry, the magnesium block won’t ignite – just the shavings.

Magnesium burns at a white-hot temperature of 5600 degrees Fahrenheit, is nearly impossible to extinguish, and should enable your tinder to burn even when everything is damp.

A fire steel (like the popular swedish fire steel

) will create plenty of sparks, and is itself a great replacement for matches or lighters, and a great way to start gas stoves or grills. But the thing is… it doesn’t include any flammable tinder (the magnesium).

Because of this, if you are making a fire, you will NEED to have dry tinder to light in order to get your fire burning.

In short summary, a fire steel is Okay for its intended purpose, but not so great for an emergency survival kit or is not best for a survival situation. A magnesium fire starter clearly is the better alternative for this…