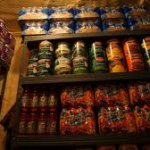 It is easy to think of prepping as being one single set of actions, designed to prepare for any and all future challenges as/when/if they occur, and of the differences between types of situations and necessary responses as being on a smooth continuum, from trivial and minor to life changing/threatening and major.

In fact, rather than just two modes of response (like a plane), we suggest it is most helpful to create three different sets of future challenges, and to identify prepping solutions for each of these, because the three different types of preparations are very different from each other.  These three levels of preparing, and the three levels of future challenges, are :

Short term problems are those which are, obviously enough, of short duration.  They are events that clearly have an expected resolution to them via society’s normal mechanisms, and it is just a case of waiting for the issues to be resolved.

An example of a short term problem would be a major storm, flood, or power outage.  Such events could inconvenience you for anywhere from an hour or two up to perhaps a week or two.  Lesser events can be considered, too – having your car break down on the side of the road late at night, for example.

In such cases your response to such challenges generally does not require evacuating your normal residence – indeed, by definition, any Short Term/Level 1 events are ones which do not require you to leave home.

You may lose power, you may lose other utilities, and you may have transportation challenges, and there may be regional disruptions to normal social support functions.  But the functioning of the country as a whole remains unchallenged, and in some form or another, you know that matters will, in the foreseeable future, return to normal.  Society is not disrupted, you don’t have lawlessness or looting.

How/what do you prepare for and respond to a Level 1/Short Term disruption?  Things like an emergency generator and enough fuel to power it for a couple of weeks.  Extra fuel for at least one of your vehicles.  Food and water for a couple of weeks.  A two-way radio, although there’s a good chance your landline and cell phones will still work, as may also your internet.

You only slightly modify your normal lifestyle, and you are secure in the certainty that life will be back to normal well before you’ve exhausted your emergency supplies.

These are obviously events which are more major than Level 1 events.  We define Level 2 events by the need to abandon your normal residence and move somewhere else.  Level 2 events disrupt the total fabric of your region, and are more open ended in terms of when and how matters will return to normal.  They might be natural – a solar storm wiping out our power grid, for example.  They might be economic – a collapse in the global economy – something which we seem to be flirting with at present.  They might be the result of military action, or could be any one of many other issues – maybe even something minor which then snowballs and destroys the increasingly fragile and delicate state of today’s modern interdependent society.

Level 2 events may even threaten people’s lives due to interruptions not only to utility services such as water, sewer, power/gas, trash, and communications, but also due to disruptions to the distribution system for food, gasoline, and other essentials – disruptions which appear likely to extend beyond the point at which most non-preppers can cope.

Some lawlessness and looting will develop, as desperate people search for food.

On the other hand, these problems, as severe as they are, have some sort of an eventual happy ending and resolution clearly in sight, such as to see the restoration of normal infrastructure and a return to ‘life as we know it’ (LAWKI) at some reasonable point in the future.

How do you prepare for and respond to a Level 2/Medium Term disruption?  You need a secure location where you can shelter from the lawlessness that may envelope cities and other areas of dense population, and where you can create your own little bubble of comfort, safety, and what passes for civilization.

Possibly your retreat will still have essential services connected to it (power most of all), but you’ll be prepared for an eventuality without power.

You’ll live primarily from stored supplies without worrying too much about replenishing them.  Sure, you’ll try and reduce your reliance on external sources of most things, but you’ll not feel the need to become 100% self-reliant or to adopt a 100% sustainable independent life.  Instead, you’ll happily live off your stockpiles of food, energy sources, and whatever else, because you can see a clear restoration of ‘normalcy’ at some point within a year or so.

You need two way radio communication to supplement any remaining ‘normal’ types of communication, but primarily to communicate among yourselves, and perhaps augmented by a shortwave radio receiver so you can keep updated with news of ‘the rest of the world’ and what is happening to resolve the problems your region has suffered.

You may choose to do this independently by yourself, because you have the supplies and resources you need.  Alternatively, and perhaps for optional social reasons rather than for any essential needs, you may choose to band together with other prepared people too.

Level 2 clearly requires a massively greater amount of preparation (and expenditures) than Level 1.  If you have only prepared for Level 1 contingencies, you’ll have a problem surviving a Level 2 event, primarily due to not having a retreat location to move to.  Cities will quickly become lethal environments, and even if you successfully manage to evacuate the city you live in, so what?  Where will you move to?  See our article about the modern day imbalance between city and rural life – there’s no way that small country towns can suddenly accept four times more people than they had before as refugees from the cities.  If you don’t have somewhere to go to, already prepared, you have in effect nowhere to go to.

Preparing for a Level 2 event will cost you anywhere from $100,000 as an absolute bare-bones minimum up to $1 million or more.  These costs will start to encourage you to adopt group/shared solutions.  While two people can never live (or prepare) as cheaply as one, they sure can do so for much less than double the cost.  There’s not only safety in numbers, but economy too.

If you feel it impractical to consider preparing to Level 2 standards yourself, don’t give up.  The reality is that a Level 2 condition is close to essential.  Maybe Code Green can help.  Ask about becoming a member of our cooperative community and how you can benefit from shared investments in Level 2 and Level 3 preparations.

This is the big one.  Society has broken down.  Something has destroyed much of the infrastructure not just of your region, and not just of the United States, but of most of the entire world.  This might be a bio-disaster (a flu pandemic as has several times come very close in the last decade) or a global conflict, or an EMP pulse, or any one of many other events.Y

ou’re not yet reduced to a stone age life-style, but you’ve no idea when you’ll be able to resupply any of the items you’ve stockpiled, and so your focus now is on sustainable ongoing self-contained living.

Whereas in Level 1 events, you happily lived off and even squandered your stored supplies, sure in the knowledge that the event was short term, and in Level 2 events, you were more prudent and glad you had spares for essential items and generous amounts of ‘just in case’ materials, with Level 3 events, you’re not just focused on spares for essential items, but on how to build replacement products from raw materials and how to adjust to a life with massively fewer modern and complex appliances.

You of course have needed to evacuate if you lived in a city, and the lawlessness (or arbitrary capricious unilateral attempts at imposing draconian ‘order’) is pervasive.  It is an ‘every man for himself’ sort of situation, and yes, it may also become a ‘kill or be killed’ situation too.  Starving people, facing certain death for themselves and their families, will have no choice but to fight for food and shelter, and you in turn will have no choice but to defend that which you have.

You need to change your lifestyle so that you can become self-sustaining and self-sufficient.  Sure, you’ll use up your stockpiled supplies as you devolve down to a level of sustainable self-sufficiency, and as you do so, you realize that you might never be able to replace such things.  You need to become both energy and food independent, and your energy independence needs to be not just in the form of PV solar cells (because what do you do as they degrade and fail, in a situation where you have no replacements and where you can’t create the underlying pre-requisite technology to manufacture more) but rather in the form of some type of energy source that you can maintain and operate indefinitely.

Food independence can be slightly modified by trading off surpluses of the types of food you can grow with surpluses of food developed by other nearby families and communities.

You need to become part of a community because you don’t have enough resources, by yourself and with whatever handful of friends and family are with you, to have all the talents, skills, and resources necessary to optimize your life.  You need to be able to communicate, bi-directionally, not just locally and regionally, but nationally and internationally, so as to understand what has happened to and what is happening to the rest of your country and the world, and to coordinate your activities with those of other pockets of survivors.

If you have already prepared for a Level 2 contingency, you’ll have a ‘parachute’ to cushion your crash-landing down into the post-industrial society that you’ll be entering.  The most important thing is you have a place to retreat to, and enough supplies and resources to buy you some time to urgently start adapting to the new future staring you in the face.

It would be better, of course, if you already have some Level 3 planning and preparations in place, but if you’re already at Level 2, you’re way ahead of most other people.

How much does it cost to be prepared for a Level 3 situation?  That’s a question with a huge range of possible answers, and it depends on how much of life’s former comforts you want to try and preserve and for how long, how much you want to have in place to devolve down to less complex forms of technology, and how far you can split such costs with fellow preppers.