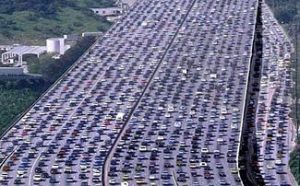 One of the things we think about and try to anticipate and prepare for is how to leave our normal residences and ‘bug out’ to our retreats in a Level 2/3 situation.

Let’s face it – few people think like us or act like us today, and so it seems unreasonable to assume that immediately after TSHTF, there will suddenly be a city-wide conversion to our mindset and values, and everyone will lemming-like follow everyone else, and stream out of the city simultaneously.

We think – we don’t know for certain, of course, none of us do; but we think/hope that the reality of how the public will respond to such an event might show much less uniform consensus of opinion and action.

There are several reasons for thinking this.

1.  Home is the Safest Most Welcoming Place for Most

Firstly, if something massively life changing does occur, most people’s natural instinctive reaction will be to retreat to their place of greatest comfort and safety.  For people with no retreat awaiting their arrival, that place will be wherever they currently live, or maybe with other friends/family, who are probably located somewhere in the immediate vicinity.

Children may choose to return to their parents (eg college kids), and grandparents might choose to move in with their children, but these would most commonly be movements within the local area.  If they involved longer travel, the movements probably wouldn’t be initiated immediately, and in any event would most likely be from one major city to another major city – unlike us; we’ll be moving out of the cities entirely to our more rural retreats.

Not many people have refuges elsewhere that await their arrival, so both the ability and the urge to evacuate will be very low in most people’s minds.

2.  Waiting for the Government to Save the Day

Secondly, most people will passively expect ‘the government’ to ‘do something’ to save them.  It will take days or even weeks for it to be apparent that the government and its resources are stretched beyond breaking point and unable to provide the care and assistance they need.

Most people have become so conditioned to expecting any type of help for any type of problem to be available close to immediately, just by calling 911 in an emergency, or some other type of support organization in less dire scenarios, that it will take some time for the ugly reality to finally be accepted for what it is, and for them to realize that they are truly on their own.

As an amusing related thought, while most people expect the government to do something to help, they have also become accustomed to some government inefficiencies and delays, so the first few days of nothing happening will be accepted without panic or overly great concern.  With annoyance, yes.  But panic, probably not.

Thirdly, if any type of central authority and government functionality survives whatever the Level 2/3 event is, their immediate response to the population as a whole will be a calming one, telling people to stay calm, not to act rashly, not to rush out and buy up all the food and resources they can, and to patiently wait for the authorities to impose a new form of order and structure.

There is no way any politician or other public official will ever willingly or prematurely say ‘I relinquish all my power, I have completely failed and am unable to help, you’re on your own’.  Neither will they say ‘OMG!  It is the end of the world as we know it!’  Instead they’ll utter meaningless platitudes advising people to be calm and patient, and reassuring us that the authorities are rushing to do all they can to help.  In other words, ‘Trust us, we’re from the government, and we’ll be there to help you – real soon now’.

The main stream news media will adopt their mantle of false statesmanlike behavior and will also counsel their audiences to remain calm and trust in the authorities.

The few people who realize the truth are more likely to ‘get out of Dodge’ as quickly as they can, on their own, rather than to make the process of getting out of Dodge more difficult than it might already be, and so they can be first to find an alternate place to settle in for the duration of the emergency.  If anyone does make public their concerns, they’ll be jeered at for being defeatist or alarmist.

Some people simply won’t be able to evacuate an area, whether they want to or not.

Due to not all people always filling their tank all the way to the top when they stop for gas, it is a fair guess that fewer than half the cars on the road, at any given moment, have more than half a tank of gas in them, and most of those people don’t have any additional gas supplies at home.

Like it or not, most people are limited to being able to drive no more than one or at the most two hundred miles, purely due to having insufficient gas.

Realization of Reality Will be Slow and Gradual

We are keyed up with our bug-out bags, our bug-out vehicles, and have already mentally accepted the possibility that life as we know it could end without warning at any time.  We would not have so much mental inertia to overcome, and would not need to do so much prior to commencing an evacuation from the city.

We can be out the door and on the way to our retreat in a very short period of time measured in possibly minutes, and certainly no more than hours.  But most of our neighbors will still be wondering what happened, and what will happen next to restore life back to normal, watching us from behind their curtains as we back our car out of the driveway or parking lot on the way to the main road out of town.

We have tried to think of Level 2/3 type events that would result in an instant mass exodus of people, and we’ve not been able to do so (can you?).  Just about every event is likely to see most people wait in the safety of their homes for some magical government agency to come and ‘make things right’ for them.

The only possible exceptions we’ve come up with are things like tsunamis or nuclear incidents.  But we keep circling back to the issue – where would people go to instead?  City dwellers look to their city services for support, not to farmers in the countryside (if they even think of such people at all).  The countryside, to many city folks, is ‘empty’ and lacking in support resources.

For those people who aren’t quite so passively peaceful, if they don’t have somewhere to go that offers better safety/security/survival, it will take them more time to get sufficiently motivated to turn their back on their homes and lives and hit the road, going who knows where – possibly ‘from the frying pan into the fire’.  In a major/national Level 2/3 event, there will not be any obviously ‘better’ places to evacuate to.

For example, a failure of the electricity grid – many people will think ‘There’s no power anywhere in the country, so it makes no sense to leave my home and city, because nowhere is any better off’.  That is false reasoning, as you well know.  These people aren’t thinking ‘Not only is there no electricity, but soon there will be no water or food either, and there’ll be riots and looting as starving people do whatever they can to find food in a city that has none’.

But the time to educate your neighbors of the fallacy of their reasoning is not then.  Now, you can gently attempt to share your beliefs with them.  But after a Level 2/3 event, the rules have changed, and they are now on their own, because you too are on your own, with only the support of other participative members of your prepping community to count on.  Anyone else is dead weight, is ‘overhead’ and merely stretches your scarce and precious resources further.

About the only situation we can think of which would cause a worst-case scenario would be some sort of evacuation call by the authorities – activating the ‘emergency broadcast system’ (do you even know what that is and how it would work?) sort of thing and compelling everyone to urgently evacuate an area.  Perhaps this could be due to a tsunami expected to hit in some hours time, a hurricane in some days time, or a nuclear power plant becoming uncontrollable.

What other types of catastrophic events would have enough lead time to allow for a warning and people to respond to that warning?  We’d be lucky to get 15 – 20 minutes warning of an incoming ICBM;  and probably less by the time the warning finally reached us directly.  An earthquake or solar storm/electricity grid failure – probably no warning at all.

Should You Plan for the Best or the Worst?

Now for the really ugly question.  Should you plan your bug-out strategy based on a best case scenario – ie, empty roads, a full tank of gas and plenty more at as many freeway gas stations as you care to stop at, and a fully working vehicle?  Or is an essential part of prepping the initial assumption that things will not be ‘best case’ in any respect?

In other words, on a continuum from a pleasant Sunday afternoon drive, without the traffic at one extreme; and a grueling overland trek, fighting off crazed hordes of zombies at every turn at the other extreme; where do you decide to set your own marker for the degree of planning and preparation necessary?

David Spero has been prepping since before it was ever an issue.  He remembers how his father would store vast quantities of food and supplies at home, and both of them thought it to be normal prudent actions – as, of course, they are.  He has a masters degree in business, has worked internationally, speaks several languages, is a nationally accredited firearms instructor, a licensed ham radio operator, and through this website is becoming increasingly a respected authority on matters to do with prepping.

One Reply to “Bugging Out – Easy or Hard?”