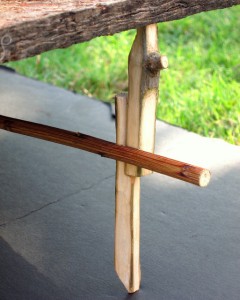 Anyone that has ever picked up a survival book has undoubtedly come across the ubiquitous figure 4 dead-fall. It has pretty much become the main stay of survival authors everywhere…because it works! There are many other traps out there, however, that for some mountain men is a way of life.  One such trap used in the Siberian Taiga is the Koolyamka Trap

Very much like the figure four trap, the Koolyamka Trap uses 3 sticks; an upright, a bait stick, and a dead-fall support stick. The Trap, though, sets more like the promontory peg. In fact, one could argue that without the bait stick it is nothing more than a promontory peg deadfall.

The unique set up for this trap is the bait stick which locks the upright and dead-fall support. And, when any lateral movement is applied to the bait stick, it releases, unlocking the other two sticks, causing them to fall.

Another notable difference, is the bottom of the upright which is cut at an angle, making it even less prone to the weight landing on it and possibly not trapping your game.

There is more to this trap, but the trigger mechanism is what is unique. Typically, however, it is used as depicted below

There you have it, another useful alternative to the figure 4. And, You can say you use the same trap the Siberian Mountain Men use.