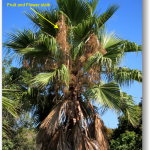 A while back, I wrote an article about the Fan Palm and its myriad uses. Amongst some of those uses, I mentioned Native Americans, at least in Southern California, revered it for it’s fire making ability, meaning used it to make there tools for firemaking— the hearth and drill.

Since that article, I’ve received a few emails on how exactly it was done, or which part of the tree, specifically, was used. So, in an effort to answer those questions, I am going to do a quick write up on it.

Not all parts of the fan palm are suited for use as a fire making set, though with enough tenacity and conviction, it would deem possible it could be done. Fortunately, the part we really want is usually quite accessible, as it has a tendency to fall on the ground as it gets later in the year. Outside of that, you’re going to find yourself chasing it up the tree, literally. 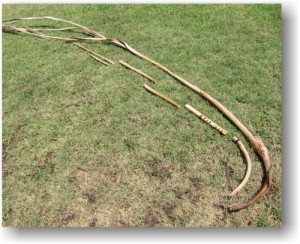 You can see from the image, what the part of the fan palm we are going for looks like… We are not going for the palm fronds, or the actual trunk itself. We are going for the rib that produces the flower and fruit. The rib is typically a soft/medium density wood, but it is also possible to find it too soft which will not produce the results you’re after. This is easy to spot, because the center of the wood will feel a bit spongy when you press your thumb into it, if it is too soft.

The rib itself will produce sheath like growths, much like corn husks, only stiffer. underneath the husks is the prized wood your seeking. So, just take a knife and slice away the husks, until you are left with a nice smooth rib. 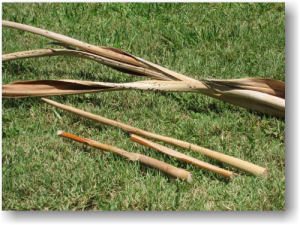 And, the curved section of the rib makes an ideal bow for bow and drill firemaking. 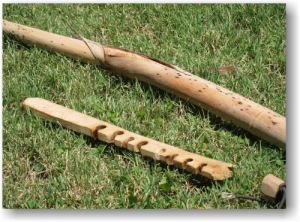 That said, the bow was not used by North American Indians to make fire.

The wood is very easy to work with and will shave off very easy, allowing for some fast processing of the wood. 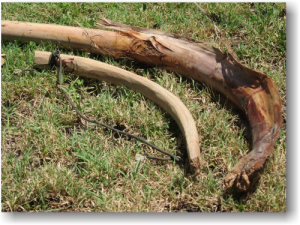 Because of it being on the more softer side of the medium density woods, I tend to make my hearths thicker, so I don’t drill through them too fast.

So, how well does it work? For me, I still prefer sotol, for the hearth, over fan palm, but sotol is not as prolific as fan palm. I do, however, prefer it over willow and cottonwood, but not over Shamel Ash.

I really like the idea of being able to use a section to fashion a bow, that was a bonus. And, if you strip away the sheaths on the trunk, they are very fibrous and make excellent tinder for your kit.