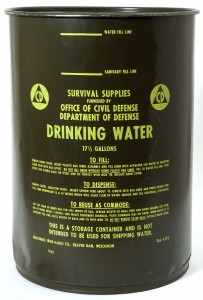 Not all containers are created equal. Whether the container you wish to store water in is something you can place in your Bug Out Bag, or bury underground at your retreat, the material that it made from is as important as the purity of the water it holds.

Plastics that are safe to store water in must be food grade safe, on the outside of the containers there should be a recycling symbol (triangle of arrows), which has within it a number between 1 and 7. Food grades are 1, 2, 4, and 5. (Although some bio-plastics are also food grade and marked with a 7, unless you know the container is meant for food do not trust it, as not all number 7 stamps mean they are safe for food). The best food grade containers made of plastic are marked with a number 2, as this is High-density Polyethylene (HDPE) plastic. The others are PETE (#1), LDPE(#4), and polypropylene (PP/#5).
If you are recycling old containers be careful not to use old milk jugs, or cardboard type juice boxes. Milk proteins and Juice particulars are almost never removed completely by washing and it is best to go with a new container for long term storage.

Not even all glass containers are the same. Some glass used to store chemicals 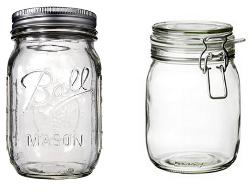 originally would not be considered food safe, let alone safe to store water. Glass can break, crack due to freezing, and even end up with tiny flaws from use inside which might trap contaminates.Borosilicate glass (trademark name Pyrex) is likely one of the best forms of glassware to store food and water in as it can take temperature ranges and even has some resistance to breakage. Watch out for soda-lime based glass that calls itself Pyrex as it is not heat resistant. One example is Mason jars, and jars that look like mason jars but cannot be pressure canned.

If you plan on collecting your water from rain run off, the best way is is store it in a stainless steal tank. They generally have a 40 year life span, and they tend to actually cost less over the lifetime of the tank compared to other storage systems. Stainless Steal is best for Water Storage systems.

Water from the kitchen sink tap might not need anything added to it to store it. If your municipality water supply adds chlorine to the mix store the water as is works. If however you have ‘clean’ water, without additives, you will need to add the chlorine yourself. Add two drops, of non-scented chlorine bleach to every 2 litres of water, make sure it is also non-additive as well. When you need to use the water, let it stand open for 30 minutes before drinking. You should be able to smell the chlorine in the water when you add it, if you don’t add another two drops, but remember to wait an additional 15 minutes of airing the bottle before use. Be sure to read the label when purchasing chlorine for this use, 5.35% chlorine content is best for calculating your needs. Chlorine bleach will kill mostbacteria causing diseases.

Storing the chlorine itself is another issue. Chlorine should be stored between 50 and 70 degrees Fahrenheit, after a year of storage, it starts to degrade by approximately 20% per year to salts and water. If the chlorine source you are using is 6% sodium hypochlorite, you should replace it after 3 months of storage.

Calcium Hypochlorite is actually better for storing water then using liquid bleach, because of it’s longer shelf life. It is generally sold in two forms, dry and hydrated. Although the hydrated is safer to handle the dry granular can have an indefinite shelf life (a yellow white solid which has a strong smell of chlorine). It can be purchased by the common name as “pool shock”.

The thing to watch for when buying pool shock is if they add anti-scaling agents (water softeners), you want a 68%-78% calcium hypochlorite without the water softeners added, although calcium chloride is often added as well.

One pound of granular Calcium Hypochlorite

will treat up to ten thousand gallons of water (37854.1 litres). The process is rather simple. First you make a solution of the Calcium Hypochlorite

(approximately 1 teaspoon) to two gallons of waters (8 litres). Do not drink the solution! The ratio for stored water is 1:100, one part solution to 100 parts water.

can also be used to make Chloroform, but that’s another topic.

should be stored nearby, or in your bug out bag. I include it here as a fall back method. Iodine purification works best with the water temperature being over 68 degrees Fahrenheit, and the iodine itself must be stored in a dark bottle away from UV sources such as direct sunlight as it is sensitive. Persons with thyroid problems or on lithum, women over fifty, and pregnant women should consult their physician prior to using iodine for purification. Iodine removes/kills Giardia lamblia better then bleach. Giardia lamblia is a flagellated protozoan parasite that colonizes and reproduces in the small intestine, causing giardiasis.

Tip #3 Where you store is important.

Keeping safe drinking water in a proper place is as important, as storing the water correctly in the containers. Dark closets are better then garages where the sunlight hits the containers, as some plastic containers degrade faster when exposed to sunlight, as well as methods such as chlorine are also effected by the same UV rays. You might also want to consider the construction of the area the water is stored in, is it safe there from an earthquake or fire?

Tip #4 Water should be replaced every six months.

Even bottled water from the store has a shelf life, but home made stored water can have small amounts of contaminates which can have a compounded effect over time. Keep track of your preps and rotate them, including the water and methods used for your water supply.

You need more water than just for safe drinking supply, you need to bathe, clean surfaces , cookware needs to be maintained, and even need sterile water for first aid. Take stock of the water you use on a day to day basis so that you have a better understanding of what you use when there isn’t a crisis, so that you are better prepared when there is one.