Things have been getting a little…strange lately. What with all these banker suicides and warnings from banks that the stock market is about to decline by 10% or more.

To add to that, let’s recall an article that appeared in The Washington Times back on October 29, 2012 entitled, “MEANS: U.S. economy on schedule to crash March 4, 2014″: 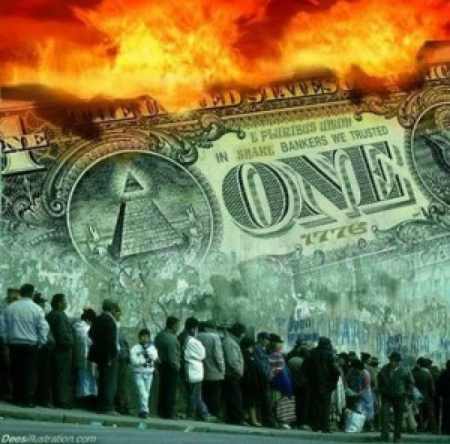 the world would occur on Dec. 21, 2012 — about two months from now. There is, of course, some small chance that they might be right. On the other hand, there is a very large probability that the real end of the world will occur around March 4, 2014.

The doomsday clock will ring then because the U.S. economy may fully crash around that date, which will, in turn, bring down all world economies and all hope of any recovery for the foreseeable future — certainly over the course of most of our lifetimes.

Interest rates will skyrocket, businesses will fail, unemployment will go to record levels, material and food shortages will be rampant, and there could be major social unrest.

Any wishful thinking that America is in a “recovery” and that “things are getting better” is an illusion.

That’s right. According to WT, the economic world as we know it could collapse entirely on or around this coming Tuesday, a day which some have pointed out is, in fact, a Tuesday — just like Black Tuesday, or the day that Wall Street crashed in 1929 which led the country into The Great Depression.

The Washington Times wasn’t the only one, either. Back in 2010, the Mail Online ran a story after a Cambridge professor said that, based on history, a cataclysmic event of “international significance” would rock the world in 2014:

In the last 500 years there has been a cataclysmic ‘Great Event’ of international significance at the start of each century, he claims. Occurring in the middle of the second decade of each century, they include events which sparked wars, religious conflict and brought peace.

So it would appear we’re due for something big…

More recently, renowned trends forecaster of more than 25 years Gerald Celente has predicted that the world’s economies will begin to spiral into a deathspin this spring as well, although he isn’t certain of a specific date. People the world over are sick and tired of their corrupt governments he notes, and here in America, we are a much poorer nation that people realize:

“Nearly half of the requests for emergency assistance to stave off hunger or homelessness come from people with full-time jobs,” Celente notes. “Nearly 90 percent of the jobs that have been created in the recovery are part time or don’t pay a living wage.”

The fast food strikes seen in 2013 are the tip of the iceberg, he adds, with more to come as people struggle in what he terms our “plantation economy.” These days, he adds, many of those working poor have college educations. “Kids get out of college with $60,000 to $70,000 in debt and wind up working at Whole Foods,” he says.

This is certainly true based on the stats published in the Huffington Post’s “Everyone In America Is Even More Broke Than You Think” last November:

-If you make more than $15,000 (roughly the annual salary of a minimum-wage employee working 40 hours per week), you earn more than 32.2% of Americans.

*Based on the 153.6 million American wage-earners, as defined by the Social Security Administration.

up the $85 million a month in bonds and mortgage-backed securities it’s been purchasing since the 2008 crisis to help stabilize the nation’s economy…while China, owner of over $1 trillion in U.S. debt is dumping it with impeccable timing.

Global unrest is certainly being stoked all over the place, unrest which has been continually building for years now. But the media is largely controlled. Is the intention to incite panic? Recently a run on the banks in Kazakhstan was instigated easily enough simply through social media.

One thing is certain: our financial system is anything but sustainable. Our economy has been artificially propped up for so long now anyway… If the powers that shouldn’t be wanted people to run on the banks to bring a fake end to our fake money, it wouldn’t take much to get them to do it.