Following the coming false flag, how will the powers that be get the country to fall into line and willingly participate in their demise as we race towards World War III? It is important to note that the people must be brought to their knees by denying food and through unconstitutional incarcerations as provided for under the NDAA and EO 13603.

The powers that be have no choice, as most Americans will not willingly go along with what is coming. In the previous parts of this series, the forces of WW III have aligned and are positioning for WW III. Your incarceration and subsequent use of your slave labor, under a declaration of martial law, is next. 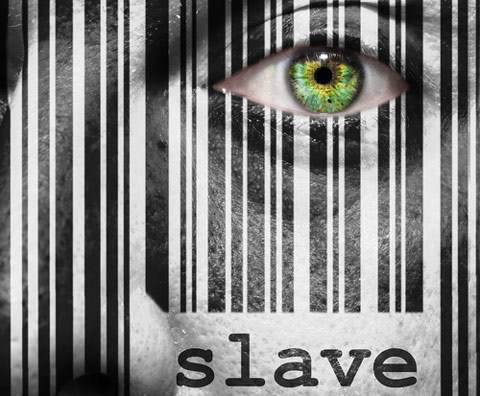 The day that Congress passed the NDAA and Obama signed it into law,on January 11, 2011, this illegitimate government declared war on the American people. If you have been living in a fog, the NDAA allows the government to secretly arrest and even murder you.  You don’t believe it, click here, right now. No, do not read the next sentence until you have clicked and read this link, or this link. Do I now have your attention?

The Insider’s Insider Tells Us What Is Coming

Zbigniew Brzezinski is an insider’s insider. He and David Rockefeller co-founded the Trilateral Commission. He served as Jimmy Carter’s National Security Adviser. He may as well have been called Mr. President during the Carter years because he ran the US economy into the ground while undermining American sovereignty during the Carter administration. Many suspect that he also controls Obama. He was, after all, Obama’s Russian Studies professor at Columbia back in the 1980′s. We know that he handpicked Jimmy Carter to become the President and many suspect he had a large hand in grooming Obama for the same job. Brzezinski’s close affiliation with Rockefeller makes him a person of interest when it comes to the subjugation, of not only this country, but of the entire planet. Brzezinski is obviously the globalist’s man on the ground and serves the role as puppet master. 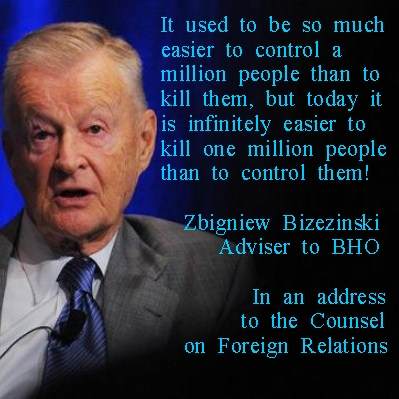 There can be no other reasonable interpretation, that this is a direct threat against all who oppose being enslaved and eventually exterminated.

Enslavement Will Be the Prime Directive

The purpose of the coming martial law is twofold: (1) Eliminate all opposition to the authoritarian rule which has taken over our government; and, (2) Use forced labor (i.e. slavery) to martial the resources for the coming world war.Recently, a document entitled FM 3-39.40 Internment and Resettlement Operations (PDF) came to light. The document was originally to be kept secret, but everyone in the military command structure, as we know, is not on board with the encroaching tyranny sweeping across this country. The document is a recipe book on how to organize and maintain a FEMA camp. I would suggest that all Americans turn off the TV for an evening and read the document which spells out what life will be like for millions of Americans. The language makes it crystal clear that one of the primary purposes of these numerous camps will be slave labor. The stunning descriptions of these plans can be read here. What happens to the elderly, the handicapped and the infirm? History clearly demonstrates that when slave laborers no longer serve their intended purpose to the state, they are exterminated. Is this what these well publicized FEMA coffins are for?

How Will You End Up In the Camps

There can be no question that Executive Order (EO) 13603 will create artificial famine scenarios which will bring millions to the camps in search of food and protection from rampaging hordes in search of food.

You would be well advised to read EO 13603 from cover to cover if you want to know what is coming. Researchers used to be able to click on a link which took one to Whitehouse.gov and the provisions of EO 13603  were clearly elucidated. However, the federal government has made obtaining the same information a little more difficult. Today, if you want to read about the provisions of EO 13603, you must first click on the Federal Register and then scroll down and locate EO 13603 and then click on that particular hypertext link which takes you to a PDF.  Relevant parts will be listed in the Appendix of this article.

Controlling the Flow of Food Will Bring Most to the Camps

All of the following references to EO 13603 are verbatim copy and paste of the referenced PDF file entitled, Executive Order 13603.

Sec. 801. Definitions. In addition to the definitions in section 702 of the Act, 50 U.S.C. App. 2152, the following definitions apply throughout this order:

Most Americans eat a 1400 mile salad. We are totally dependent upon the shipment of food to eat. When the transportation of food is controlled, so is the distribution of food. Subsequently, Obama has given himself the authority to control all transportation in an emergency and he now has the authority to create food shortages in America because he is the sole judge of what constitutes an emergency.

Third world population control, using food as one of the primary weapons, has long been a matter of official covert US national policy and a portion of President Obama’s Executive Order (EO 13603) is a continuation of that policy. Only now, the intended targets are not the Lesser Developed Countries. Instead, the American people are the new targets for these novel starvation policies. Americans will be the new third world and your food will be withheld in order to enforce compliance with the planned slave labor in support of the WW III production needs.

According to EO 13603, the President, or the head of any federal agency that he shall designate, can conscript “persons of outstanding experience and ability without compensation,” in both “peacetime and times of national emergency.”  I can hear the Obama supporters now as they will write to me and say, “Obama would never do that, you are drinking from the Kool-Aid”.  Well, here it is, you can read it for yourself.

Sec. 502.  Consultants.  The head of each agency otherwise delegated functions under this order is delegated the authority of the President under sections 710(b) and (c) of the Act, 50 U.S.C. App. 2160(b), (c), to employ persons of outstanding experience and ability without compensation and to employ experts, consultants, or organizations.  The authority delegated by this section may not be redelegated.

This means that Obama, and his fellow communists, can seize any resource, property, or person at any time for any reason, including being able to force that person to perform assigned labor without being paid.

There is only ONE word for forced, “uncompensated employment”. That word is slavery. Congratulations President Obama, you have effectively repealed the 13th Amendment to the Constitution.

Section 601 of the act specifies, in part, how far the government can go in terms of making you their slave.

(1) collect and maintain data necessary to make a continuing appraisal of the Nation’s workforce needs for purposes of national defense;

(3) upon request from the head of an agency with authority under this order, consult with that agency with respect to: (i) the effect of contemplated actions on labor demand and utilization; (ii) the relation of labor demand to materials and facilities requirements; and (iii) such other matters as will assist in making the exercise of priority and allocations functions consistent with effective utilization and distribution of labor;

(4) upon request from the head of an agency with authority under this order: (i) formulate plans, programs, and policies for meeting the labor requirements of actions to be taken for national defense purposes; and

This is an enslavement document. If you are not convinced, please allow me to encourage you to read this again. If the above section was merely going to be a military draft, then the Secretary of Labor would not have to be involved. However, as you will note the “Secretary of Labor, in coordination with the Secretary of Defense and heads of other agencies, as deemed appropriate by the Secretary of Labor, shall: …assist in the development of policies regulating the induction and deferment of persons for duty in the armed services;… formulate plans, programs, and policies for meeting the labor requirements of actions to be taken for national defense purposes; and (ii) estimate training needs to help address national defense requirements and promote necessary and appropriate training programs…”.  Refer back to section 502 of sections 710(b) and (c) of the Act, 50 U.S.C. App. 2160(b), (c);  these are the people that the Secretary of the Labor will conscript in order “to employ persons of outstanding experience and ability without compensation and to employ experts, consultants, or organizations”.

This, my fellow Americans, is a civilian conscription and this is why the Secretary of Labor is in charge instead of the head of the Selective Service! Under these provisions, the government believes that they can send you anywhere, to work on anything of their choosing.

For more in-depth coverage, I have included a sample of government documents which more than validates the claims made in this article. If you have any doubts as to the veracity of these claims, I would suggest setting aside some time this weekend to read about your future. Given the scope of these programs which are backed by massive legislation, I think it is likely that we could see as many as 50, 75 or even 100 million Americans in a camp of some sort in forced servitude to the coming war efforts.

Food will not be on the only means that people are drawn into the camps. There are many secondary programs which have already been beta tested by this administration. That and also how you might best resist and survive will be the topic of the next part in this series.

The Common Sense Show features a wide variety of important topics that range from the loss of constitutional liberties, to the subsequent implementation of a police state under world governance, to exploring the limits of human potential. The primary purpose of The Common Sense Show is to provide Americans with the tools necessary to reclaim both our individual and national sovereignty. You can follow Dave’s work at his web site, on Facebook and Twitter.