The dollar collapse will be the single largest event in human history. This will be the first event that will touch every single living person in the world. All human activity is controlled by money. Our wealth, our work, our food, our government, even our relationships are affected by money. No money in human history has had as much reach in both breadth and depth as the dollar. It is the de facto world currency. All other currency collapses will pale in comparison to this big one. All other currency crises have been regional and there were other currencies for people to grasp on to. This collapse will be global and it will bring down not only the dollar but all other fiat currencies, as they are fundamentally no different. The collapse of currencies will lead to the collapse of ALL paper assets. The repercussions to this will have incredible results worldwide. 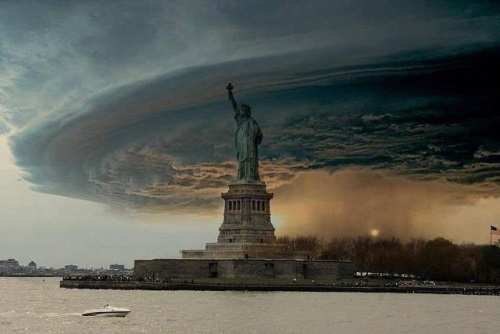 Thanks to the globalization and the giant vampire squids of the Anglo-American Empire, the dollar is the world’s reserve currency. It supports the global economy in settling foreign trade, most importantly the Petro Dollar trade. This money is recycled through the City of London (not to be confused with London) and New York. This fuels our corporate vampires that acquires and harvests the wealth of the world. The corporate powers suppress REAL assets like natural resources and labor to provide themselves massive profits. This Fascist, Statist, Collectivist model provides the money into the economy to fund an ever increasing federal  government. That government then grows larger and larger enriching its minions with jobs to control their fellow citizens. Finally, to come full circle, the government then controls other nations through the Military Industrial Complex.

This cycle will be cut when the mathematically and inevitable collapse of the dollar occurs. In order for our debt based money to function we MUST increase the debt every year in excess of the debt AND interest accrued the year before or we will enter a deflationary death spiral. When debt is created, money is created. When debt is paid off, money is destroyed. There is never enough to pay off the debt, because there would be not one dollar in existence.

We are at a point where we either default on the debt, willingly or unwillingly, or create more money/debt to keep the cycle moving. The problem is if you understand anything about compounding interest, we are reaching the hockey stick moment where the more debt that is incurred, the less effective it is and this leads us to hyper inflation. There are only two actors needed for this hyper inflation, the Lender of Last Resort, the Fed, and the Spender of Last Resort, the government. These two can, and will, blow up the system. I believe they will wait until the next crisis and the whiff of deflationary depression before they fire up the printing presses. That crisis is coming very soon at the end of this summer or fall. The money and emergency measures are worn out. The fact that NONE of the underlying problems that caused the 2008 crisis have been resolved. The only thing that has happened is that instead of corporate problems, we now have nation problems. In this movie Greece will play the role of Lehman Brothers and the United States will play the role of AIG. The problem is there is nowhere to kick the can down the road and there is no world government to absorb the debt, yet… (Problem, Reaction, Solution.)

So this leads me to the Top 5 Places Not To Be When the Dollar Collapses.

1. Israel- This Anglo-American beach head into the Middle East was first conceived by the most powerful family in the world, the Rothschilds, in 1917. The Balfour Declaration said that there will be a Zionist Israel years before World War two and the eventual establishment of Israel. Israel has not been a good neighbor to its Muslim nations and has always had the two biggest bullies on the block at it’s back. When the dollar collapses, the United States will have much to much on its plate both domestically and internationally to worry about such a non-strategic piece of land. This will leave Israel very weak at a time when tensions will be high. This very thin strip of desert land will not be able to with stand the economic reality of importing its food and fuel or the political reality of being surrounded by Muslims.

2. Southern California- The land of Fruits and Nuts turns into Battlefield Los Angeles. 20

million people packed into an area that has no water and thus food is not good to say the least. Throw on top of the huge wealth disparities and the proximity to a narco state and this does not bode well. We have seen riots for Rodney King, what will happen when the dollar is destroyed and food an fuel stop coming into this area. People will get desperate and do crazy things, especially when a huge proportion of its citizens are on anti depressants. If food and fuel cannot get in, what about Zolfot? At a time when people’s world are falling apart they lack the ability to deal with this new paradigm. If people come off of these drugs too fast they suffer psychotic breaks and you will have thousands of shootings or suicides.

3. England- The Land of the Big Brother and former Empire of world wide slave and drug trade will suffer heavily. The stiff upper lip that their the British Elite ingrained into their sheeple will not work anymore as the British population explodes. The human character will sacrifice and unite for a foreign enemy, but not if the enemy has always been the Elite. The Anglo-American Empire may pull off another false flag to distract it’s population on another Emmanuel Goldstein like in 1984, but I feel this collapse will happen before they pull it off. This will make all eyes point at the British Elite as solely responsible for this catastrophe. We have seen massive riots for soccer matches with hooligans. What will happen when this island with very little food and fuel gets cut off?

4. New York City- Another large urban area living too high on the dollar hog. NYC is the area I moved out of in 2008. There is little doubt that all of the wealth in New York, New Jersey and Connecticut is derivative off of Wall Street wealth. The savings and investments of the whole nation and much of the world flows through this financial capital. As the world wakes up to the massive financial fraud, this will lead to the destruction of capital like we have never seen before. This will have tremendous effects on the regional economy as people driving in Mercedes suddenly wonder where their next meal is coming from.

5. Washington D.C.- The political collapse of the Federal Government will wreak havoc on the hugely inflated local economy. As more and more states find it necessary to assert their natural control, the Federal Government will suddenly loose power and importance as the whole world suffers from a Global Hurricane Katrina. The money that they create and spend, will become worthless and the government minions pensions will evaporate. Millions that once relied on the ability to force others to send their money to them, will learn that the real power has always been at the most local level. Massive decentralization will be the answer to globalization gone mad. Local families and communities will forgo sending money and power out of their community, as they will care about their next meal and keeping warm.

“You can ignore reality, but you can’t ignore the consequences of ignoring reality.” -Ayn Rand

To sum up, those areas that have lived highest on the hog in the dollar paradigm will most likely be the worst places to live when the dollar collapses. Many of you will find this article with passing interest, but rest assured this dollar collapse is coming. It is a mathematical inevitability. We will not be as fortunate to muddle through this collapse like we did in 2008 when it was a corporate problem. This time around, it is a national and global problem. The global Ponzi scheme has run out of gas as the demographics decline, as cheap abundant oil declines, as hegemonic power declines. This comes at a time when we reach the exponential or collapse phase of our money. The Irresistible Force Paradox says, “”What happens when an unstoppable force meets an immovable object?” We are about to find out, when infinite money hits a very finite world.