Over the last decade world grain reserves have fallen by at least a third and that decline looks set to continue. For the last half of the 20th century overproduction was the order of the day. Huge grain surpluses, butter mountains and milk lakes dominated the news. 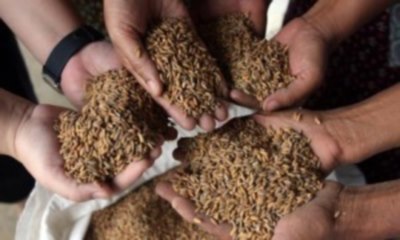 During this period the United States had a farm programme where land lay idle to prevent even more surpluses, this provided a cushion against shortages, the land could be planted up if the surpluses fell to levels considered to be too low. In the UK land was left fallow and green manured to enrich it for the following season. The crops were rotated and the harvests were generally very good. In addition there was the carryover: The amount of grain left in the massive storage silos at the time the next crop is harvested. Other western nations had similar systems.

1965 is a good year to show how the system cushioned against disaster. In 1965 the Monsoon in India failed. The United states shipped a full fifth of its grain harvest to India which averted a potential famine. Due to the amount of surplus in store the incident had a minimal effect on grain prices on the world markets.

There were occasional spikes during the period of 1950-2000, but the effects on world prices were a short lived thing. The weather was usually to blame and after a bit of a ‘blip’ everything settled down when the amount of idled land and the amount of food commodities in store were announced.

In 1950 the world had a population of 2.5 billion souls. By 1986 world demand for grain was rising rapidly due to an ever increasing population and the prices were starting to rise. In an effort to keep a surplus and to reduce or at least to stabilise the prices, the land idling programmes were reduced in both the United States and the UK, with other countries following suit until by 1990 most agricultural land that could be farmed was farmed.

It was in the 80′s that someone, somewhere decided that biofuel was the way of the future. The global warming con artists that had infiltrated every layer of governments decided that biofuel was the answer, that clean, green fuels would stop global warming in its tracks…well, according to what they say now that wasn’t very effective, the Earth is apparently still warming. These ‘experts’ didn’t look at the global picture.

They never considered that the ever growing global population would require more and more food and that more and more arable land across the world would be given over to the growing of biofuel crops.

When realization finally dawned that food production could not keep pace something had to be done, a wide ranging plan was formulated to sell sustainability, global warming, which was now starting to be referred to as climate change, to the masses. Agenda 21 was born.

Agenda 21 basically puts the environment above the inhabitants of this planet. In order to preserve the habitat of insects and small animals nobody has ever heard of, certain regions cannot be farmed in case a moth finds itself out of a home. The scope of Agenda 21 is massive, and it affects every facet of our lives. Even those of us who refuse to comply with  the policies of the United Nations are affected by the rules and regulations of the plan.

It affects our choices on a daily basis. It affects the transport we use, the homes we live in, the kind of heating we use, the clothes we wear and the food we eat.

When Maurice Strong, then Secretary-General of the United Nations Earth summit introduced Agenda 21 20 years ago He said:

“Current lifestyles and consumption patterns of the affluent middle class — involving high meat intake, the use of fossil fuels, electrical appliances, home and work-place air-conditioning and suburban housing — are not sustainable,”

At this point the war on carbon dioxide started. Interestingly carbon dioxide is what humans breathe out. Every breath we take in, is followed by a breath out, from birth to death respiration adds to the carbon dioxide in the atmosphere. Can we assume therefore that this is what is meant by anthropogenic global warming?

Does the man-made global warming they refer to constantly actually include breathing as a cause of pollution alongside factory output?

The United Nations, pushing its quest for a One World government fully endorse the ethos of flora and fauna over people. In fact, if they can reduce the amount of people along the way they will be exceedingly happy about it. What better way to do that than to have ‘naturally occurring famines’ that cannot be pinned on the governments of the world or on the United Nations.

Now although we are used to seeing famines in Africa I think that the trend is about to change. The peoples of Africa have a much smaller carbon footprint than we do here in The West, and for that reason a famine in the West would reduce the emissions that come from our busy, carbon-fuelled lifestyles far more readily than wiping out the entire African sub-continent.

We are also less malleable than those who have to rely on foreign aid for even their basic foodstuffs. We are more likely to cause trouble, to fight, riot and revolt if our kids are not fed. our governments know this, and in the United States they stockpile ammunition so that when the time comes they can deal with the situation.

In the UK there is anecdotal evidence form serving and ex-police officers,that the government does the same, but they are far less public about it. Trauma and major incident teams across the UK that used to train for multiple car pile ups and train crashes now train for civil unrest and riots as well as the more usual stuff. They practice for dirty bombs and biohazard threats, things the government says we are facing from enemies unknown.

The pieces of the puzzle are little by little falling into place. Agenda 21 is advancing rapidly.

Food really is set to become the new gold and land the new oil because without them we are done for. We have to turn back to the old ways of producing enough to look after our families. Our children need to be taught how to grow produce, how to fix things, build things and generally become more self sufficient.

Regardless of the space you have, and the conditions you have, I urge you to look into what you can grow for yourself. Think laterally, think vertically, whatever you have can be utilized in one way or another. Every single mouthful you grow you are one mouthful nearer self-sufficiency and one mouthful further away from famine…famine that is being systematically induced by the global elite and their failure to act in any way, shape or form to prevent it.