Ask any “gun guy,” and he’ll not only have an opinion, he’ll have the opinion. Ask any “pistol-packing mama,” and she’ll not only offer an answer, she’ll offer the answer. At every shooting range, in every gun shop, at every hunting lodge, the question has been asked, answered and asked again. What is the right gun? Specifically, what is the right gun for home defense? 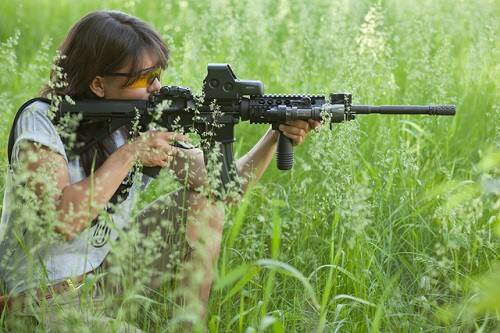 I set out to try to find a definitive answer to the question, and I arrived at one — and only one — inescapable conclusion: The diversity of opinion on the “perfect” gun for home/personal defense ranges wider than Michael Moore’s already overburdened waistline.

Before I offer you my own take, let’s establish a few ground rules:

There’s only one statement on which everyone ought to agree: If you need a gun, you’d bloody well better have one. I’m sure that a baseball bat seems like a good substitute; but if your home, life and/or the lives of your loved ones are on the line, you’d be better served by staying out of arms’ reach of the assailant. I don’t care if you’re Quentin “Rampage” Jackson, Randy Couture and Brock Lesnar all rolled into one. If you can stop a home invader before he gets his hands on you, you’re better off. Besides, the fact that you look like a Mixed Martial Arts champion didn’t scare him enough to keep him out of your house in the first place.

Power isn’t everything. The fact that you own a Blaser R8 chambered in .375 H&H is pretty cool. But you’re not looking to stop a charging rhino at 100 meters; you’re looking to stop a charging crackhead at less than 10 meters. Unless you live in one of those Malibu palaces Barack Obama’s Hollywood friends call home, you probably lack both the square footage and the sight lines to make any of the larger hunting calibers a good choice. Also, high-powered rifle rounds will not only go through a criminal, they’ll go through the wall behind him, the framing, the exterior stucco, the neighbor’s exterior stucco, their framing and their living room wall. Leave the elephant gun in the safe, Bwana. In fact, the power rule applies to virtually any of the larger-game hunting/sniper calibers. I own a PSL. It’s a Romanian-made designated marksman rifle built on a stretched-AK platform and chambered for the 7.62x54r round. It’s actually a fine weapon, an excellent deer rifle, and is effective at distances exceeding 800 meters in the right hands. It’s also a lousy choice for CQB. Not only is the PSL overpowered for standard home dimensions, it’s about 4 feet long. Have fun turning the corner next to the downstairs bathroom while carrying a canoe paddle. Moreover, if you miss your first shot, the recoil may make a decent follow-up shot hard to come by once the bad guy is closer to you than your muzzle brake.

Know your gun. Outside the politics, a gun is just a machine. Take it home, learn to disassemble it, clean it, oil it and maintain it. After you learn proper care and feeding of your firearm, take it to the range and learn how to shoot it. The same gun your buddy uses to dot I’s and cross T’s at 50 feet won’t just jump into your hand and begin making smiley-faces on your Shoot-n-C’s™ from the jump. Whatever weapon you settle on, you’d better know how to handle every stage of owning it. If it’s for home defense, you’re literally betting your life on it.

Be comfortable with the gun you choose. Some of my friends believe that comfort should take a backseat to effectiveness. Of course, some of my friends are speaking from live combat experience. Rangers knock down islamofascists in Waziristan a world away from your kitchen. A home defense scenario is as bad a situation as most people are likely to encounter. If you’re going to have to engage some scumbag in a firefight, give yourself as much of an advantage as possible.

Size matters, sort of. A .40 to the forehead will end any dispute. So will the aforementioned .375 H&H. But so will a .22. My wife owns a Ruger 10/22. The stock has been repainted in a color Glidden refers to as “French Lilac.” It wouldn’t be my first choice for virtually anything. But it can punch holes in paper at 100 meters, meaning it can punch holes in humans at 15 paces. Remember, you’re not trying to start a firefight; you’re trying to end one. Don’t discount the .22 just because it’s small. It won’t matter to the assailant. Small caliber firearms are lightweight, accurate and easy for even small-framed people to wield — even in French Lilac.

The Shotgun myth. Actually, the shotgun myths. Don’t get me wrong; shotguns are excellent CQB/home defense weapons. But they’re hardly the room-clearing bulldozers depicted in the movies. Contrary to popular belief, you do have to aim a shotgun, even at inside-the-house distances. Bird shot from a Winchester Defender 1300 will expand more than buckshot, but it won’t knock down a guy who’s 15 feet away from you if you aimed 3 feet to the left of him. Always aim, even with a .12 gauge. I really do recommend bird shot over buckshot and slugs. No. 6 birdshot is lethal inside 15 paces. While slugs are potent man-stoppers, they will also pass through a lot of material before coming to rest. That’s fine if you live on the Kennedy compound — not so much if you live in a subdivision. If you choose a pump-action shotgun, don’t make the ridiculous mistake of racking the slide as a warning. The assailant is already in your house. By racking the slide, all you’ve done is give away your location. He might run; but he also might take cover, draw his own weapon and wait for you to step into a killbox. Also, I can’t imagine heading to a gunfight without chambering a round first. Save the theatrics for the Stallone films.

Pistols versus rifles: Which is better? In general, both/neither. Again, it’s a matter of comfort and confidence for the individual defending his home. If I can ping some thug in the dome with my cute little NEA .22 magnum derringer, then the .22 magnum is a fine choice. If I’d rather “slice the pie” with my AR, then that’s the right choice. However, I would remind you that a properly wielded pistol is wielded at arm’s length, making the shooter’s profile only a couple of inches shorter than the same person with a standard AR. Don’t discount the AR just because it’s longer. Just remember the earlier rules: Know your surroundings.

Pistols versus pistols: Revolver or semi-automatic? Conventional wisdom holds that a revolver is a better home defense weapon than a semi-automatic because fewer moving parts means fewer chances for Murphy’s Law to appear in the middle of your house on fight night. But today’s firearms are — generally — made to high- and tight-enough standards that a well-maintained firearm in the hands of a reasonably intelligent person will work when the time comes.

A note about ammunition: Excepting shotguns, load your weapon with hollow-point rounds. The design of hollow-point rounds ensures greater expansion of the wound channel, damage to internal parts and less chance of rocketing through the target and out the other side. Kill the attacker, not the neighbor’s cat, nor the neighbors.

With all of that in mind, here are my choices:

“Tactical” shotguns. From Mossberg, Benelli, Remington and many more, the short-barreled shotgun loaded with birdshot is immensely powerful, reasonably accurate, fairly easy to maintain and comparatively inexpensive. The aftermath will be messy, but better to clean the carpet than be cleaned out of the carpet.

Pistol caliber carbines. These guns get left out of a lot of similar discussions, and I’m not sure why. Police officers across the Nation carry .40 service weapons. Why not add a little length to the gun, thereby giving it more muzzle velocity and less recoil? Besides, PCC’s are still short enough to move around in CQB without a hitch. Thanks to HK, Kel-Tec, Beretta and others, PCC’s are plentiful, inexpensive and a lot of fun to shoot.

The Taurus Judge. Load it with 410-bore shotgun shells, not the .45LC rounds. Keep in mind, 45LC and 45ACP are not the same caliber.

The AR-15. Minimal recoil, excellent accuracy and plentiful ammunition make the AR a no-brainer in nearly any situation.

Ultimately, I can offer two pieces of advice upon which everyone from the combat-tested veteran to the driven-hunting dove shooter can agree when it comes to guns and home defense:

The rest is up to you. I hope you never have to test any of this. The best way to handle a gunfight is to avoid it entirely. However, if someone else forces one upon you, choose wisely. Your life may literally depend on it.

One Reply to “The Right Gun For The Fight”