For months the administration, financial pundits and Wall Street analysts made it a point to inform Americans about the healthy state of our economy. One of the key metrics they’ve used as proof of recovery was the Gross Domestic Product (GDP) which measures the productive output of the U.S. economy as a whole. 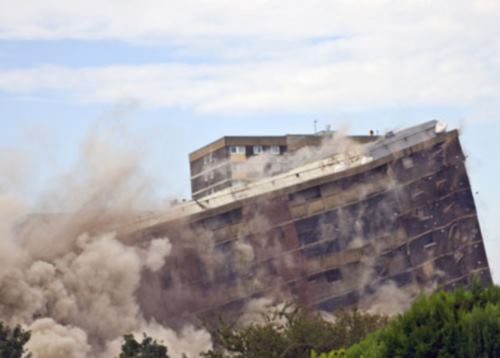 Earlier this year the U.S. Bureau of Economic Analysis noted that this measure was showing positive growth. But now, after a second official revision, all of that purported growth used to goad consumers into spending more money on homes, cars and other goods has been revealed to be nothing but conjecture. According to the BEA, not only did economic growth stall during the first quarter of 2014, it completely collapsed, signalling a significant shift in consumption habits amid increasing food and energy prices:

Real gross domestic product — the output of goods and services produced by labor and property located in the United States — decreased at an annual rate of 2.9 percent in the first quarter of 2014 according to the “third” estimate released by the Bureau of Economic Analysis.

The government first made consumers believe that the economy grew. Then they revised this down to slight negative growth. The latest revision of -2.9% growth is significant, because even with official inflation at over 2% America’s economic output has declined. It seems that no matter how much money they pump into the system, it isn’t enough to offset the lack of income or job growth.

This is a monstrous negative revision.

A big part of it was non-residential fixed investment.  Rather than invest, companies have issued debt and bought back stock.  But this does nothing for the economy — it simply blows a bubble in the market.  How long before that comes home to roost?  Not long now, I suspect.

If you think companies don’t expect a recession inbound, you’re nuts.  Inventory draw-downs subtracted 1.7% from the GDP number.  Companies don’t build inventories if they don’t think they can sell them — as such this is a forward indicator.

Oh, and current production profits?  They’re down while current taxes were up.  Obamacare anyone?  Worse is that undistributed profits decreased too and this is the second quarter sequentially in which they did.  What does a company pay dividends with?  Undistributed profits.

So for two quarter the markets has risen like a rocket while the fuel for that rise has been exhausted for the last six months.

This will turn out well, I’m sure.

Officially, we have not yet entered a recession. That requires two quarters of negative growth. However, the current trend indicates that’s exactly what’s going to happen. In the next 30 days the BEA should be releasing the GDP rate for the second quarter of 2014. According to economist John Williams that will more than likely show a negative print and will lead to an official confirmation that the U.S. has entered another recession.

What’s worse, unlike the previous recession that followed the collapse of 2008, there is no way out of this one.

Income… the median household income, net of inflation, is as low as it was in 1967. The average guy is not staying ahead of inflation.

I don’t see what will save it at this point.

Now all of those warnings are coming to pass.

We have entered the next leg down and given that the governments of the world have pretty much used up all of the arrows in their quivers, there is nothing to stop what’s coming.

And what’s coming is nothing short of a complete collapse of our way of life. Hard to believe? Yes. Implausible? No.

It is so plausible, in fact, that well known radio commentator Mark Levin recently noted that the U.S. government has been actively preparing for and simulating the collapse of our financial system, as well as the widespread violence that will follow.

There aren’t enough police officers on the face of the earth to adequately handle a situation like that.

This is happening right here and now. The streets may not devolve into madness tomorrow or next month, but piece by piece the foundations of America’s economic health and social structure are crumbling. The time to finalize preparations for what’s coming is now.

It’s going to go from bad to worse.