I have written to you many times over the years about food storage and owning some junk silver coins. (U.S. coins minted before 1965 that are 90 percent silver.)

Also, if possible, we should own some small gold coins and have some cash currency, at least enough for 90 days or more. 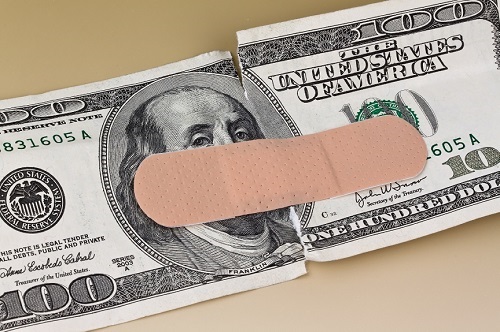 For sure, we need some guns suited for each member of the family. Each family member should become familiar with his gun and have extra ammunition for each gun.

Barter items are also very important. Use your imagination here. There are many ideas on this such as coffee, dried food such as beans, cigarettes, canned sardines, canned tuna, sugar and stevia, salt, rice, tea, canned soups, cleaning products, soap products, food bars, basic patent medicines, your prescription medicines and many more. A good source for vacuum-packed food is the Mormons.

Living outside the system means total independence from all government and everyday grocery stores and pharmacies. Even your power source (public utilities) should be backed up with a gas or other fuel generator.

We almost certainly face a black depression or a total collapse, and very few people are ready. Why? Most people are so accustomed to the easy life with everything at their fingertips that they cannot imagine a crash of the system leaving people desperate. It is much better to be prepared with the items mentioned above. So what if you lose some food along the way? You can say that you had some insurance. No time to worry about this.

We won’t quit living and enjoying life because we take some money and buy food and emergency supplies. But we will feel more secure. Do not discuss your storage project with anybody.

The breakdown of the system should now be visible to everybody. Government is failing at every level, along with the collapse of morality. In the final stages of any government, there is a breakdown of morality and work ethic. Society becomes “dog-eat-dog.” This is visible now.

Of course, we must remember that the basic cause of the collapse of any government is its currency debasement. This is all too evident in the United States today.

The U.S. is past life support of borrowing money. We live on printing press money. It’s past the runaway stage.

You remember the crash of the housing bubble in 2008? Continued artificially low interest rates by the Federal Reserve are causing a repeat of that malinvestment-fueled calamity. Those who study the charts are seeing housing numbers that “are reminiscent of 2005 and 2006.”

The home price affordability index as tracked by the National Association of Realtors has been below its long-term trend line for four months now. Three economists from Robert Morris University say that history shows this means a housing bubble is in place. Bubbles inevitably collapse.

Worse is the indication that the United States is now in a hyperinflationary phase. The U.S. dollar is on perilous ground.

It took the United States more than 200 years to reach $8 trillion in “debt.” Since 2006, when helicopter Ben Bernanke began his reckless money printing spree, U.S. “debt” has more than doubled and now stands at $17 trillion.

Inflation is not rising prices, as I have explained before. Inflation is the increase in the money supply and credit. Rising prices are a symptom of inflation. 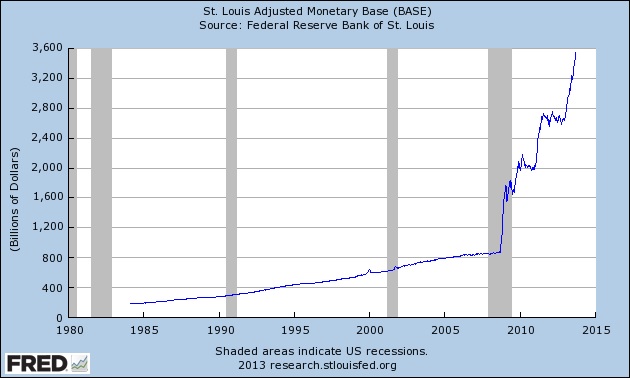 As the excellent Zero Hedge explains:

Inflation is often mixed up with rising prices, but those are only the consequence of inflation. Essentially, inflation is a monetary phenomenon. It reflects the amount of money

in circulation: if that increases, inflation goes up. The ultimate effect of increasing prices is logical, as more units of a variable asset (money) are around in comparison to a fixed asset (e.g. commodities). This results in the need for more units of the former, to get the latter. Those who want to know how much money circulates may want to ask the central banks, as their balance sheet is largely representative. And because America is the supplier of the world reserve currency, the balance sheet of the Federal Reserve is the ultimate measure of inflation.Looking at the chart of the Fed’s balance sheet above, one immediately notices an inflation explosion. This is monetary inflation, of course, but the effect of this has not really trickled down to our daily lives and there is a good reason for that: The velocity of money collapsed at the same time. (See the chart below.) And that is because of the fact that the money created by the Fed is still stuck in bonds and other debt securities. Moreover, a major part of the money reserves is parked in banks. Consequently, the ratio (the velocity of money) has plummeted in recent years — not because there is less money in circulation, but because more of the money is tied up. 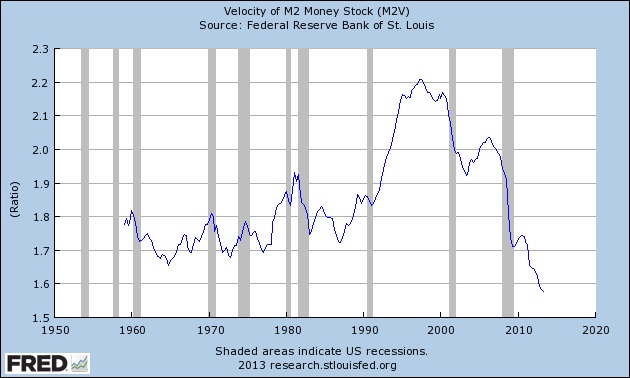 Some people will tell you there is no inflation and cite phony government numbers cooked to keep the collapsing economic conditions under wraps. But based on 1980 measures, inflation is at 8.8 percent, not the 1.5 percent used to cheat seniors out of their proper Social Security cost of living adjustment and interest payments to the Chinese and Japanese at sustainable levels.

Some people will tell you the rising stock market is indicative of a strong economy. Granted, the stock market continues to bounce around all-time highs. But the Zimbabwean stock market went from 2,000 to 40,000 in one year during the early stages of Zimbabwe’s hyperinflation. By the end, Zimbabwe was printing trillion-dollar notes. The people and the system had to use foreign currencies to survive. Of course, money debasement speeds up and becomes exponential in the last months of a regime’s existence.

Currency debasement because of printing press money destroys government and undermines the moral fabric of society and most especially elected Congressmen and Senators. How long now with the present U.S. system?

I am glad that I don’t know that answer. But if you have no preparations for your and your family’s survival as outlined here, this should be your No. 1 concern.