Medical emergencies have a tendency to strike when we’re least prepared. You may find yourself in situations where you have less than ideal materials to work with, and are far and away from the proper facilities. Some wounds can’t wait to be taken care of at the right time and place, and you may have to make do with whatever is at your disposal. 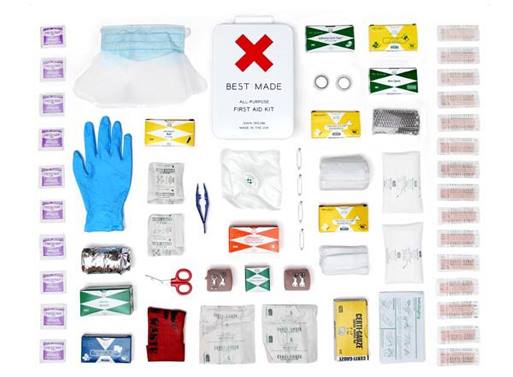 Or perhaps you feel the need to prepare for a future with a lack of medical care. As superbugs continue to spread in our hospitals, we may be facing a future where going to the hospital for a cut isn’t worth the risk. Every visit to a medical facility may require us to “do the math” so to speak, and try to determine what’s more likely to cause death; our current injuries, or a hospital infection? “Home medicine” is going to become a lifesaver, and that may mean we’ll have to improvise with our materials a little (or a lot). Here’s a few tips to help patch up your wounds when a trip to the hospital is out of the question:

Also known as cyanoacrylate, super glue can be an effective substitute for stitches in some cases. It was used during the Vietnam War to pretty good effect, but it isn’t perfect. As the glue dries it creates heat, which can further damage the tissue. Also, the glue releases small amounts of formaldehyde during the curing process. Fortunately there are numerous medical versions of this glue on the market that address these problems. Unfortunately, they can be many times more expensive than ordinary super glue.

You can find much cheaper alternatives by buying medical glue for veterinarians, which happen to be made of the same ingredients for the most part. If you decide to use super glue for any of your wounds, read these precautions first. Cyanoacrylate is far from magic, and is better suited to some injuries over others.

Tapes of all kinds have been used to treat various ailments and injuries, and duct tape is one of the cheapest and most useful. There is a wide range of medical applications for using duct tape, including frostbite prevention, building slings and splints, and of course fixing cuts. You’re probably already aware of that last one, but what you might not know is how effective it is when combined with super glue. I’ve tried on occasion to fix an injury with duct tape, only to have it slowly fall off after a couple of hours (same problem with some band-aids).

The main reason most adhesives fall off, is due to moisture and hair. Since super glue hardens in the presence of moisture followed by becoming waterproof itself, it makes a great paring with duct tape and other bandages. You can apply it to the skin on either side of the cut, and place the duct tape on top, or even just put the glue on the sticky side of the tape and then place it on the injury. Here’s a really good demonstration.

As I mentioned before, hair can become very problematic when using any kind of tape. It has a tendency to get in the way of most injuries, and you can imagine that hair is going to make any injury to the scalp a difficult task. It turns out that you can use the hair itself to secure any wounds on your head. So long as it is a straight cut of less than 4 inches, and you have at least an inch or so of hair to work with.

You can grab a couple small tufts of hair from either side of the injury, and tie them into a knot to close the wound. You can then add an adhesive like super glue to the knot to keep it in place. This was recommended by “Wilderness Medicine” by Paul S. Auerbach, who also suggests that the knots will have to be cut at a later date, though he also says the super glue will wear out on its own eventually. He also recommends that the patient should not wash or shampoo his/her hair for 48 hours after this treatment. You’ll also have the added benefit of not having to remove staples or thread from the scalp after the injury has healed. 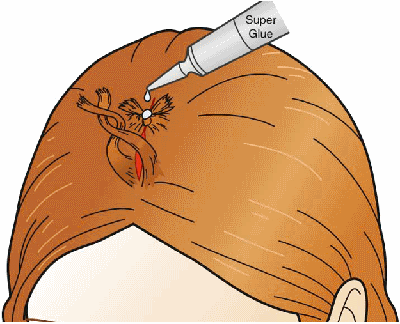 The thin clear coating that sticks to the inside of an egg shell is known as the membrane. It contains anti-inflammatory properties that make it a good option for covering small cuts, though it may have potential for larger wounds as well. A study conducted in 2003 showed that egg membranes helped reduce the healing time for burn victims.

If you have a cut, you should first try to stop the bleeding as best you can (other sources claim you can use it stop the bleeding as well). Then crack open an egg, and carefully peel the membrane from the shell. Apply it to the wound and let it set until it dries, then wash it off. Make sure to clean the eggshell before cracking it to reduce the chance of outside bacteria reaching the membrane. And as for the risk of salmonella, very very few eggs contain it. That said, you can get salmonella from cuts, so I wouldn’t use egg shell membranes for every tiny nick and cut. Proceed at your own risk.

While many of these methods suggest finding ways around sewing up a wound, sometimes it is a must. And if hypothetically speaking, you still have an injury but don’t have access to a modern medical facility, you may have to improvise your sewing materials. Most suturing thread that you buy is made of either nylon or silk, so fishing line, silk thread, or maybe even dental floss could be considered. Certain plant materials may be possible including cotton, flax, or hemp. If Wikipedia is to be believed, then history had some pretty frightening animal based suturing thread.

Some animal threads from ancient history include the lining of intestines known as “catgut”, arteries, tendons, nerves and horsehair. Hair would probably be the best “animal” option, as I suspect it would have a much lower chance of infection, and would be easier to sterilize. While most commercial suturing thread is sterilized with Ethylene Oxide gas, since we’re trying to make do here, your best bet is to boil the thread.

Hopefully, you’ll never find yourself injured and without proper medical care. All of these options have some risk involved, and none of them should be used to “save a little money” or should be taken lightly at all. If you can reach professional care, do it. If not, then hopefully now you have a few more ideas to help yourself survive.