VIOLENT solar superstorms could destroy life as we know it at ANY MOMENT, shocked scientists have warned today.

It is “only a matter of time” before a catastrophic eruption on the surface of the sun hurtles towards the planet with devastating consequences. 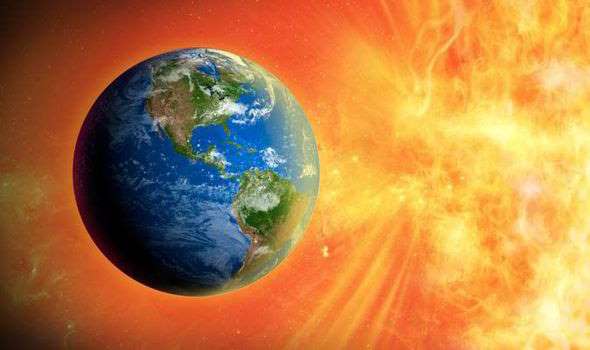 The Earth could be the target of an explosion equivalent to “10 billion Hiroshima bombs exploding at the same time”.

It has emerged crisis meetings have been held to discuss how to limit the damage of solar superstorms which present a “long-lasting” threat to all forms of life.

Scientists warn communication systems will be crippled, vital services such as transport, sanitation and medicine will close, and loss of power will plunge the planet into darkness.

Ashley Dale, member of international task force SolarMAX set up to identify the risks of a solar storm, said: “Without power, people would struggle to fuel their cars at petrol stations, get money from cash dispensers or pay online.

“Water and sewage systems would be affected too, meaning that health epidemics in urbanised areas would quickly take a grip, with diseases we thought we had left behind centuries ago soon returning.” 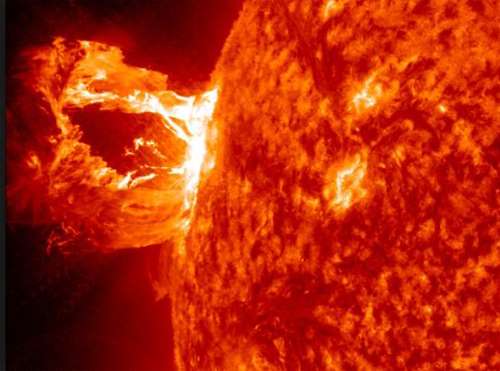 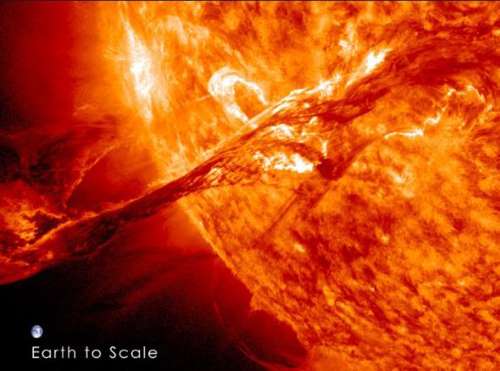 The warning comes as Britain is experiencing one of the hottest summers on record. Scientists have warned of “highly unusual activity” on the surface of the sun which has already sent smaller solar flares spiralling towards earth.

Solar storms are triggered when coronal mass ejections (CMEs) from the sun tear into the earths magnetic field ripping it apart.

This triggers huge surges of electrical currents which lead to widespread power outages and destroy machinery which use electricity.

Mr Dale, currently writing a doctorate on aerospace engineering at Bristol University, said it is only a “matter of time” before a violent solar storm smashes into Earth.

He warned the planet is facing a repeat of the devastating solar superstorm of 1859 – dubbed the Carrington Event after English astronomer Richard Carrington.

Carrington spotted a solar flare before terrifying fireballs hurtled across the atmosphere making people think it was the end of the world.

Reports followed of sparks showering from telegraph machines, out of control fires and electrical operators being injured.

Around 10^22 kJ of energy catapulted around a trillion kilos of charged particles towards the Earth at speeds of up to 1,900 miles per second.

Mr Dale said a solar superstorm could cause around £1.5 TRILLION of damage across the globe, wiping out communication systems and transport networks.

He said: “We have begun to realise these superstorms are large enough to cause serious damage and they happen quite often relatively speaking.

“It is only now, when we are so dependant on technology, that we are so vulnerable, and one is overdue by about five years.

“We are looking at a major major event, it sounds like scaremongering but we’re not, there are very serious implications.”

Its impact on civilised life was relatively small as there was less reliance on electronics, a similar event now would be nothing short of catastrophic.

In the journal Physics World Mr Dale claims an event which will have a serious impact on the world is inevitable.

NASA scientists say Carrington-level event happens every 150 years with the next one currently five years overdue.

The likelihood of one occurring in the next decade is as high as 12 per cent, they added.

Scientists from SolarMAX gathered at the International Space University in France where they concluded advanced space-weather forecasting is the best solution.

This would give around a week’s notice of where and when solar storms will take place and exactly how bad they will be,

When the warning is given vulnerable power lines will be switched off, satellites re-orientated in space and planes will be grounded.

Mr Dale said: “As a species, we have never been more vulnerable to the volatile mood of our nearest star, but it is well within our ability, skill and expertise as humans to protect ourselves.”

The warning from scientists will send shivers down the spine of astronomers who told of the recent Blood Moon which was said to prophesise a huge event that could strike down mankind.