It doesn’t matter how many guns or knives you have at home when you’re caught in a survival situation without them. For that matter, you may have a gun in your purse but either run out of ammo or lose it somehow. 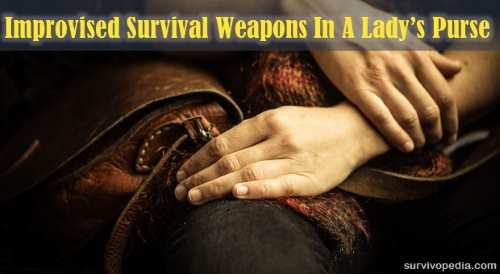 Stealth may be in your best interest and the sound of your gun going off will bring more danger to you. Don’t despair because there are many improvised survival weapons right in your purse or on your body that you can use to defend yourself. The key is to be creative.

In any survival situation, your mind is your greatest weapon and any material item that you use will be limited or strengthened by your ability to creatively and effectively use it. There are three traits that make an item suitable for use as a weapon and we’d like to talk about those first so that you can start looking at everyday items in a new light.

Before you even consider possible weapons, it’s critical that you stop thinking of yourself as the underdog. This isn’t to say that you need to be the instigator, but you do need to think of yourself as equal (or superior) to your attacker. You need to go in with confidence and force and put everything you have into each strike.

You’re no weak, passive victim so don’t act like one. This attitude will give you an automatic advantage because your attacker is going to expect a weak, scared puppy instead of a pissed lioness. Use that element of surprise as your first weapon to get in a few successful licks before he (or she) realizes what they’ve gotten ahold of. You may get lucky and end it before the attacker’s shock wears off.

You want to get as much bang for your buck out of every single strike in order to cause maximum damage with minimal effort. Though your fist can be sufficient if you know how to use it, there are several items in your purse that will add weight and force to your hit without causing damage to your hand. Here are a few:

All of the improvised survival weapons items above add WEIGHT to your strike and are great but these items add damage. In other words, they can penetrate the skin and cause serious injury or even death if you hit in the right spot.

And the good news is that you’ll most likely have at least a few of these items with you. Aim at the tender spots: eyes, throat, groin or, as a last resort, the stomach or wherever else you can hit to cause damage. Here are a few items you probably have:

This type of improvised survival weapon allows you to reach out and touch your attacker from further away. They are extensions of your arm and may disable your attacker or add force to your blow.

Though defense items typically fit into one of the three categories above, these items can be used offensively to disable an attacker and certainly bear mentioning.

As you can see, some of these items take a bit of creativity to fashion into weapons but that’s what day-to-day survival is all about. Your most valuable weapons are going to be your brain and your courage; without them, you’re done for.

Start viewing all the uses of an item instead of just the intended uses. It’s good practice should the day come when you need an improvised survival weapon straight from your purse! If you have any good suggestions for improvised weapons in a lady’s purse, please share them with us in the comments section below!