Survival In A Confrontation With Multiple Attackers

My close friend and colleague “David A” (real name withheld for security reasons) is a former Israeli Special Forces Operative, who now runs a world-renowned Executive Protection Agency. David and I have collaborated on several “projects” and he has written several books on Urban Self Defense. He recommends the following when confronted by a gang or mob bent on violence. 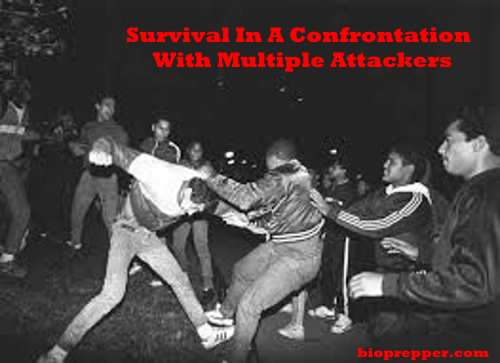 First and foremost as you have heard over and over again in this chapter – Survival often means NOT fighting, if you see an escape route — take it now. David also says see if you can talk your way out of the situation. This may not be as hard as it

sounds, but it does take a certain amount of finesse, confidence, and a very clear head. Here are some tips:

to take you apart to “F”- off, or otherwise use inflammatory speech, does nothing to diffuse the situation.

The mob’s body language will be your best way to gauge your danger level.

Watching the group’s body language will give you a clue to when they are ready to attack. The following actions may be a signs of an attack.

pushing his hair back or clenching his teeth.

If it seems like violence is about to erupt, and you are unarmed, quickly scan your surroundings for possible improvised weapons. Beer bottles, tree branches, garbage cans, bricks, and remember even your keys, or the comb or pen in your pocket can used as improvised weapons in an emergency situation.

The key to surviving a gang attack is understanding that you will not have to fight the whole group. In fact your goal is to fight as few of them as possible. David says

instead of defeating each of their bodies, you must instead destroy their minds.

You do this by making sure your first strike is spectacular, very visible, dramatic, and preferably deadly. The more visible and the greater the injury is, the greater the psychological effect it will have on the rest of the group. The first few seconds of the fight are critical, if you can emotionally defeat the group with your first blow, many of them will scatter without ever throwing a punch.

You need to identify the leader, the strongest link.

This person is your main threat and must be taken out first. Taking out the leader can destroy the group’s willingness to fight and is the first step to surviving the attack. Remember, you want to create a strong visible injury that will make the group rethink its attack. In

a life or death situation confronted by multiple attackers there are no rules.

Target the leader, take out his eyes, break his kneecaps, break his nose – even be willing to scream like banshee and bite and rip out his throat – you’d be surprised how intimidating that could be to a mob! Your goal is to immobilize the attackers by any means available – make it hurt, and make it count – – and you just might make it out.

One Reply to “Survival In A Confrontation With Multiple Attackers”