Unless you have the chance to take large game, concentrate your efforts on the smaller animals. They are more abundant and easier to prepare. Unlike plants, you do not have to get into a complex identification process to know what animals you can and can’t eat. Relatively few are poisonous. Basically with relatively few exceptions, if it crawls, swims, walks, or flies – its lunch! 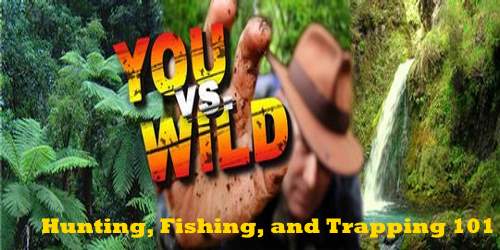 Although it may prove difficult at first, you must eat what is available to maintain your health. Some classes of animals and insects may be eaten raw if necessary, but you should, if possible, thoroughly cook all food sources whenever possible to avoid illness.

While it might sound revolting to you, understand that your best and most abundant source of food in any survival situation – are bugs and insects.

Insects to avoid include all adults that sting or bite, hairy or brightly colored insects, and caterpillars and insects that have a pungent odor. Also avoid spiders and common disease carriers such as ticks, flies, and mosquitoes.

Rotting logs lying on the ground are excellent places to look for a variety of insects including ants, termites, beetles, and grubs, which are beetle larvae. Do not overlook insect nests on or in the ground. Grassy areas, such as fields, are good areas to search because the insects are easily seen. Stones, boards, or other materials lying on the ground provide the insects with good nesting sites. Check these sites. Insect larvae are also edible. Insects that have a hard outer shell such as beetles and grasshoppers will have parasites. Cook them before eating. Remove any wings and barbed legs also.

You can eat most soft-shelled insects raw. The taste varies from one species to another. Wood grubs are bland, but some species of ants store honey in their bodies, giving them a sweet taste. You can grind a collection of insects into a paste. You can mix them with edible vegetation. You can cook them to improve their taste.

Most amphibians, reptiles and of course all species of birds are edible.

Of course, almost all fish are edible. There are no poisonous freshwater fish, cook all caught fish to kill parasites.

If you should happen to have a small caliber Survival Rifle with you, you should be able to take several species of small game such as squirrels, ground hogs, badgers, rabbits and the like. If you do not have a firearm, you should also restrict your efforts to trap or snare animals to small game, as it is much easier than going for larger prey.

If you are unarmed, Snares and Traps are a good alternative to acquiring game.

Besides, well-laid traps are likely to snare more game than you can ever shoot, and helps to preserve ammunition you may need for personal safety.

Snaring has been around for centuries. A simple snare consists of a noose placed over a trail or den hole and attached to a firmly planted stake. If the noose is some type of cordage placed upright on a game trail, use small twigs or blades of grass to hold it up.

You may have seen a simple Twitch-up Snare, also called a Spring Snare in the movies. It uses a noose as in a basic snare and an “engine” – a bent sapling, that when triggered snaps the animal into the air. This kills it more quickly and effectively, with less likelihood of escape then a standard snare. You need your snare wire or cordage, a live and supple sapling and two forked sticks to make this snare.

To make the snare:

When the animal gets stuck it the noose, it will release the hook from the base, and be sprung into the air at the end of the sapling. The simplest way to make this snare is by finding two sticks that can hook together by their forked branches. If you have the time and the tools some like to make a trigger by carving notches that fit together into the Hook and Base.

You may have seen or heard of traps that use a large rock, log, or other heavy object supported by sticks to crush animals beneath them. These are called deadfall traps. One of the most common is called a 4-stick Deadfall. Despite what you may see online or in other survival manuals, this is not an easy trap to make or set. Here is a much simpler version of that trap I have used that requires no particular lashing skills and is much less complex to set. 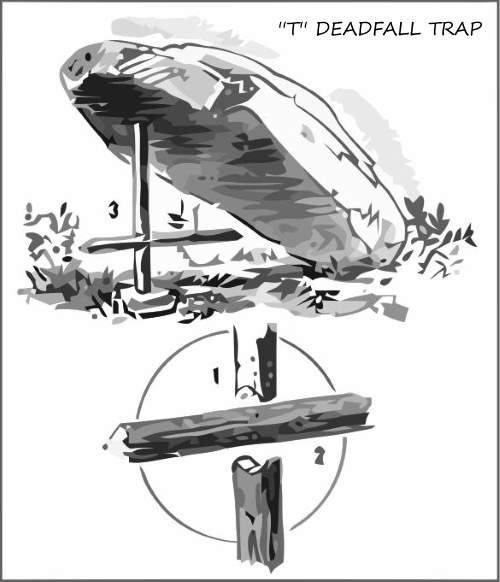 Basically it could be called a “T”-deadfall. It uses a large weight like a flat rock as in the 4-stick deadfall, a thin Bait Stick and only two other sticks that have been notched, so that they can interlock together with the Bait Stick between them.

All you need to do is carve out an L-shaped notch in the end of two sticks so that you can put them back together as if forming a single stick. The best way to do this is to take a stick roughly about 1- 2 feet in length (adjust for the size of the animal you want to trap) and about 2- 3 inches in diameter, and cut or break it in half.

Then, make your notches, and you will know that it can be put back together to hold up your drop weight.

To set the trap, all you need to do is: Put your two notched sticks together, wedge the bait stick between them, and prop the rock or heavy plank up by the interlocked sticks forming an angle with the bait stick running under the heavy object.

When the animal fiddles around with the Bait Stick, it will trigger the two interlocking sticks to separate…releasing the heavy object.

While stockpiling food is definitely important, not knowing how to grow or find your own food is a huge mistake for anyone interested in long-term “off-grid” survival.

Sooner or later even a stockpile designed for a year or more will run out. The only way you can truly ensure your future survival is to know how to grow, hunt, and preserve your own food.

So what should you grow? In a survival situation, any plant that can be eaten would be considered a survival plant. That would include any vegetable or fruit you have in the garden right through to local weeds or plants that are edible. But a true “survival plant” should meet the following criteria (in order of importance):- § It should be edible (of course), tasty and nutrient rich

There are not too many conventionally grown vegetables that will meet all of these criteria. Here is what I have growing in my survival garden.

3 Replies to “SURVIVAL IN THE WILD:Hunting, Fishing, and Trapping 101”