This article was written by Michael Snyder and originally published at his End of the American Dream blog.

Editor’s Note: The events in Greece and Ferguson have been warning for Americans. But now, something big is happening to the economy and the financial stability of everyone in this country. Unprecedented drops in the stock market and the deep issues of the real economic landscape are starting to set in, and the results will not be pretty. 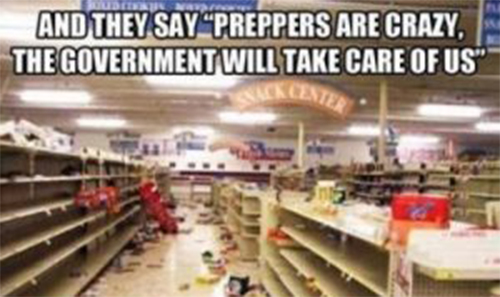 Every American needs to check their supplies, make a plan and secure what they need, because a temporary panic or a long term collapse may well be coming. Time to take this stuff seriously.

It Is Time To Kick Prepping Into Overdrive, Because This Stock Market Crash Is Just The Beginning

If you have not been preparing for what is coming, you need to get off your sofa and you need to start prepping right now.  Just remember what happened back in 2008.  That crisis took most people totally by surprise.  Millions of Americans lost their jobs, and because most of them were living paycheck to paycheck, all of a sudden most of them couldn’t pay the rent or the mortgage either.  Large numbers of families that were once living a comfortable middle class lifestyle suddenly found themselves destitute.  Well, this coming crisis is going to be even worse by the time it is all said and done, and it is not just going to be economic in nature.  Over the past two trading days, the Dow has gone down more than a thousand points.  The shaking that so many have warned about has begun.  As this shaking plays out, you and your family will need cash, food, supplies and a whole bunch of other things.  If you do not already have everything prepared, then you need to kick your prepping into overdrive because we are on a very compressed time frame now.

But don’t just take my word for it.  A top adviser to former British Prime Minister Gordon Brown named Damian McBride is saying the same thing…

A former adviser to Gordon Brown has urged people to stock up on canned goods and bottled water as stock markets around the world slide.

And he didn’t just speak in generalities.  According to an article in one of the most important newspapers in the UK, McBride is urging his fellow citizens to do some very specific things…

“Advice on the looming crash, No.1: get hard cash in a safe place now; don’t assume banks & cashpoints will be open, or bank cards will work,” he tweeted.

“Crash advice No.2: do you have enough bottled water, tinned goods & other essentials at home to live a month indoors? If not, get shopping.

“Crash advice No.3: agree a rally point with your loved ones in case transport and communication gets cut off; somewhere you can all head to.”

All of that is great advice.

But I wonder why he is so concerned about people being able to live a month indoors.  Does he know something that the rest of us do not?

Others are issuing similar ominous warnings.  The following is an excerpt from a recent article by Chuck Baldwin that seemed to be written with an unusual sense of urgency…

I suggest you have a supply of food and water to last at least three months. Many survival experts insist that a six-month supply is the minimum. Personally, I can live a long time on tuna fish or peanut butter. You can purchase MREs from a variety of sources, as well as camp-style packaged food from many sporting goods stores. Of course, bottled water is available everywhere during normal times. Stock up! Distilled water will store longer than spring water. Plus, I suggest you have some water purification tablets or a Katadyn water filter on hand. And, if you are able, prepare to grow your own food. In cold weather climates such as we have here in Montana, people quickly learn how to construct and utilize greenhouses in which to grow food. Canning food is another very helpful hedge against deprivation. If your parents and grandparents lived through the Great Depression as mine did, this was standard operating procedure.

Get a generator. Keep a supply of fuel on hand. Stay stocked up on batteries, candles, portable lights, first aid supplies, and toiletries–especially toilet paper and toothpaste. I also suggest you never run out of lighters or matches. You never know when you’ll need to build a fire. If you live in a cold weather climate, you probably already have some sort of wood stove or fireplace.

You can read the rest of that outstanding article right here.

Every family is facing a different set of circumstances, so “prepping” is not going to look the same for everyone.  What may make sense for you may not make sense for me.  But the truth is that we all need to get prepared for what is coming, because time is running out.

As I have discussed repeatedly, I have more of a sense of urgency about the last six months of 2015 than I have ever had about any other other specific period of time.  That is why the book that I recently co-authored with survivalist expert Barbara Fix is entitled “Get Prepared NOW“.  The word “NOW” is in larger print than everything else on the front cover because I really wanted to emphasize the urgency of what we are facing.

If you think that you can wait until next year to start getting prepared, you are going to be too late.

This stock market crash is just the beginning.  Next month we are witnessing a convergence of events that is pretty much unprecedented.  If you would like to learn more, here are some places to get started…

-“The Russian Media Is Talking About What Is Coming In September, But The U.S. Media Has Been Strangely Silent”

The relative stability of the past few years has lulled millions of Americans into a state of complacency.

And even our politicians are displaying a stunning level of complacency.  For example, even though our nation is rapidly going down the toilet, Barack Obama has played more than 1,100 hours of golf while he has been in the White House.

It is time for all of us to awaken from our slumber, because life in America is about to dramatically change.

Michael T. Snyder is a graduate of the University of Florida law school and he worked as an attorney in the heart of Washington D.C. for a number of years.

Today, Michael is best known for his work as the publisher of The Economic Collapse Blog and The American Dream.

If you want to know what things in America are going to look like in a few years read his new book The Beginning of the End.