For most preppers, finding an independent source of energy is one of the biggest priorities we have, right behind food, water, and protection. While clean water, guns, and gardens can help us survive, energy can help us live, and it can provide a positive input to all of our needs. Having a well on your property is great, but having an electric pump is better. Having a firearm is nice, but having cameras and alarms will bring peace of mind. And growing a garden is essential, but having some way to cook your food is…well, it’s delicious. 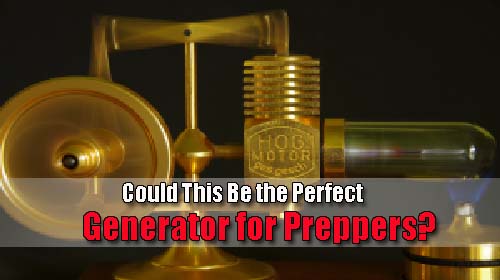 You get the picture. Our whole standard of living hinges on how much energy we have at our disposal, and our ability to use that energy for real world applications like cars, stoves, computers, and lights. So the more energy we can use during a crisis, the less of a crisis it will be for us.

And there’s plenty of options at your disposal. You can harvest wood, ferment alcohol, or create methane for fuel, and you can use solar panels, windmills, and gas/diesel generators for electricity. However, there is one option that seems to be completely overlooked in the prepper community.

It’s called the stirling engine, and I think you’ll be impressed with its specs. It was originally patented by Robert Stirling in 1816, and was designed to be a safer alternative to the steam engines of the day (they had a habit of exploding from time to time). While there are several variations on the design, at its core, it is nothing more than a heat exchanger. You simply apply heat to a chamber that is housing a piston. As the air molecules heat up and expand, it pushes the piston back. This motion allows the chamber to cool, which of course causes the air molecules to condense and pull the piston back into the chamber.

Unfortunately, it didn’t catch on during the industrial revolution. The materials available to manufacturers at the time made very poor stirling engines, that were finicky and prone to failure. Stirlings also take a while to warm up, and don’t accelerate on demand. Moving from one speed to the next takes some time. And since the efficiency of the engine hinges on its ability to shed heat, it was a poor choice for large applications. The bigger you build a stirling engine, the slower it sheds heat, which kills its power to weight ratio.

So why should preppers be interested in this supposedly obsolete technology?

For starters, it is arguable the most versatile engine. So long as you can provide enough heat to get it started, and you can burn the fuel consistently, it will run. And yes, you can even use solar energy to power it.

Stirling engines also have an energy efficiency of about 25-30 percent (as in, 70 percent of the heat that is applied, is wasted) which gives it about the same efficiency as a gasoline engine, and nearly twice the efficiency of most commercially available solar panels, which rest at around 14-18 percent.

They’re also fairly easy to build compared to an internal combustion engine. You can literally build one out of garbage. Youtube is littered with videos made by stirling engine enthusiasts, portraying the most clunky, macgyvered pieces of work you’ve ever seen.

That just happens to be the least practical one I could find, but it goes to show how easy they are to build with whatever resources are available to you.

The biggest problem with the stirling engine though, is its lack of awareness. Most people don’t know about its awesome potential, and despite a few exceptions, it’s been relegated to the toy and novelty market for the past 100 years. The market for people who want to generate electricity with this is too small for any single company to cater to.

That means that even if you spend a lot of money on a high quality engine, it’s most likely going to be a toy. It’ll be up to you to attach it to a motor of some kind, so that you can generate electricity.

I wish I could provide instructions on how to do that, but unfortunately I’ve yet to do so myself. I’ve owned a small, cheap stirling engine for a few months now (this bad boy right here), but hooking it up to an electric motor has been a work in progress. If I ever get around to it, I’ll definitely post some instructions here. Until then, you’ll have to get creative if you want to have a useful stirling engine. I just thought I’d bring this subject to the attention of all you preppers out there, since I know you folks tend to be pretty handy and resourceful.

Now obviously, the stirling engine isn’t the perfect solution to your energy needs. You’re probably not going to be able to power your entire house with one and it’s efficiency could be best described as “mid-range.” But it’s something I think every prepper should be aware of. These machines are extremely versatile, very small and quiet, simple, and pretty cheap and easy to build. In fact, if there were a cataclysmic collapse of civilization, this is the one engine that anyone could build from scrap. And for that, I think it’s the perfect prepper generator.