This article first appeared on urbansurvivalsite.com

Today’s post is a little different from usual. If you’re already a prepper, I don’t expect this article to teach you anything. Rather, I expect it to serve as a reminder of why we prep. I also hope that it can serve as a warning to those who don’t prep. 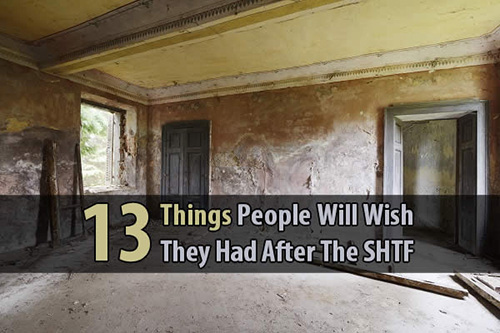 For example, you might think it’s unlikely that your home will ever be damaged or destroyed, but you still buy homeowners insurance just in case. It’s the same with prepping. Maybe doomsday will never arrive, but you never know. (And besides, doomsday is just one of many reasons to prep.)

And it’s not like we’re preparing for something that has never happened before. Millions of people die in disasters every year, economies collapse all the time, and terrorism is an ever-present threat. Sure, you might luck out where you live and never face a serious disaster. But then again you might not.

Unfortunately, most people in the Western World are unfamiliar with history and current events, so they have no idea how common disasters really are. They assume they will always have access to modern luxuries: electricity, air conditioning, fresh water, affordable food, and so forth. Consequently, humans are more helpless than ever before. It’s gotten so bad that there are even teenagers who don’t know how to use can openers.

But they won’t find out how helpless they are until the shit hits the fan. When that happens, people with no skills or supplies won’t last long. They’ll quickly realize that a few basic survival items can mean the difference between life and death. Here are 13 items people will wish they had and why.

1. Water – You will be shocked by how quickly thirst sets in once there’s nothing to drink. If the power is out for too long, the tap water will stop flowing. And unless you’re able to collect rainwater, you’ll die of thirst in just a few days. Even if the water is still flowing, you could be facing a disaster where the water is contaminated. The last thing you want to do is drink water that makes you and your family sick, especially if the hospitals are overrun. So make sure you have a way to purify water.

2. Food – When’s the last time you were truly hungry? I don’t mean you skipped breakfast and now your stomach is growling hungry. I’m talking about the kind of hunger where your arms and legs are shaking with weakness, your stomach is in knots, and all you can think about is food no matter how hard you try to concentrate. Most people have never been this hungry, but they will be if the SHTF. Grocery stores only have about three days of food on hand, a week at most. During a long-term disaster, hunger will make ordinary people dangerous.

I’m  going to share with you three old lessons that will ensure your children will be well fed when others are rummaging through garbage bins. Click here to learn all about the 3 skills that will help you thrive in any crises situation.

3. Weapons – Speaking of dangerous people, every time there’s a riot or widespread disaster, some people take advantage of the situation and start looting. If the event lasts a long time and the authorities are unable to restore order, you can bet the looters will move from the commercial areas to the residential areas. Especially if they’re starving. This is why you need to have a good weapon for self defense, preferably a firearm. Don’t stand there helplessly as criminals kick in your door, attack your family, and steal the things you need to survive. If possible, prevent this from happening in the first place by putting good security measures in place.

4. Lights – Imagine looking out the window and seeing only darkness. Even worse, imagine a pitch black home where you can’t find anything you need and can barely see the faces of your loved ones. Not only would that be unsettling, it could also make you an easy target for burglars. Don’t let that happen, especially when there are so many ways to light your home when the power goes out.

5. Radios – Having no information of any kind from the outside world can be almost as frightening as not having lights. We are so used to having news delivered right to our phones, we forget how frustrating it is to be in the middle of a long power outage (or worse) and have no idea what’s going on out there. It’s even worse if we have no way to communicate with our loved ones. If there are people you care about in an area that’s been hit by an earthquake or hurricane, you will be overcome with worry until you’re able to get in touch with them. Don’t let that happen.

6. Fire – In this day and age most people never truly experience the cold. They just wrap themselves in a blanket and turn up the heater. But without power, you’ll need to build a fire if you want to stay warm. This is more important than you might think. Every year thousands of people in the U.S. die from hypothermia, and that’s during good times! Also, don’t forget that many foods need to be heated up before you can eat them, which brings me to the next item.

7. Cooking Gear – Imagine your stomach is growling as you stare at a pile of food you can’t eat because it has to be cooked. Although many modern foods can be eaten out of the box or can, foods like pasta, rice, and some frozen foods are inedible if they’re uncooked. If the power goes out, it will only be a matter of time before the all the frozen meat thaws out and starts to rot. When that happens, you’ll be wishing you had a way to cook without power.

8. Fire Extinguisher – Although fire and cooked food are important, there’s also the problem of too much fire. Some of the people who’ve never cooked over a fire are going to accidentally set their homes ablaze. And with no fire department to stop the fire, flames will spread from home to home. Entire neighborhoods might burn down. If you don’t have a fire extinguisher, you may have to evacuate your home. Which reminds me…

9. Bug Out Bags – For most people, everything they own in the world is in one place: their home. But what if your home is destroyed? Fires, floods, hurricanes, earthquakes–all these things are guaranteed to happen again somewhere. What if your neighborhood is next? Or what if there’s a pandemic, nuclear fallout, or an invading army on its way and you have to bug out quickly? These are just a few reasons why you need a bug out bag. Even the most experienced survivalists would be pretty miserable trying to bug out without any supplies.

10. Shelter – This is more of a skill than a thing, but it’s a very important skill. If you have to bug out and you find yourself in the wilderness, one of your top priorities at the end of the day is to build a good shelter. That last thing you want to do is curl up under a tree while the cold air nips at your face and dampness from the ground seeps into your clothes. Do that, and you risk getting hypothermia. Hopefully you have a tarp and some cordage in your bug out bag, but it’s possible to build a shelter from scratch.

11. First Aid Kits – Most people have no idea how fragile their lives are. Millions of us would be dead right now if it weren’t for basic first aid supplies to keep wounds clean and prevent infections. And keep in mind that during disasters, injuries tend to skyrocket because of all the people climbing, doing manual labor, messing around with fire, and consuming contaminated food and water. If hospitals are overrun, people will have to help themselves with a first aid kit. In addition you should also have some extra medications and antibiotics. I, myself, would probably be dead right now if it weren’t for antibiotics.

12. Sanitary Supplies – Not only do you need to keep wounds clean, you need to keep yourself clean. When the garbage trucks stop coming, trash will pile up in people’s yards which will attract bugs, rodents, and disease. And when the water stops flowing, people won’t be able to properly clean up after meals or bathe themselves. Those who don’t know what to do with waste will keep using their toilets and stink up their houses. Eventually, once-clean neighborhoods will be as filthy as the streets of a third world country. In this environment, many people will get sick and die from diseases that could have easily been prevented with proper hygiene.

13. Barter Items – Hyperinflation is the main reason people stock up on barter items, but there are several other scenarios where they could become necessary. Most people don’t carry much cash anymore, so if the power is out or the Internet is down, they’ll have no way to purchase anything. That’s where barter comes in. You probably won’t be able to barter at the grocery store, but you could at least barter with your neighbors. If you are desperate for food but you don’t have any barter items, they might take pity and help you anyway. Then again, they might point their guns at you. It’s definitely better if you have something to trade.

As I said, I don’t expect preppers to learn a whole lot from this article. But every now and then we need reminders like this to keep us motivated. And if you’re not a prepper, hopefully this article will give you the push you need to get started.

Check out these similar articles:

The Lost Ways (Learn the long forgotten secrets that helped our forefathers survive famines,wars,economic crisis and anything else life threw at them)
Blackout USA (EMP survival and preparedness guide)
Bullet Proof Home (A Prepper’s Guide in Safeguarding a Home )