If you’ve ever been in the military, and especially the Army or the Marine Corps, then you’ve been taught basic infantry tactics. 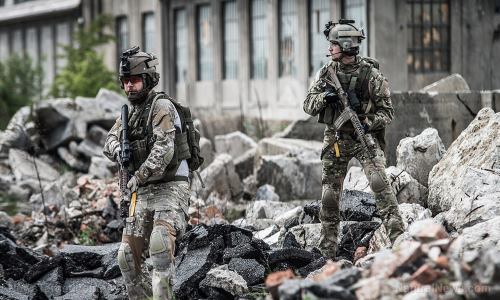 So when it comes to patrolling an area, you’re familiar with the do’s and don’t’s of moving with a purpose through various terrain.

But you also know that the vast majority of people have never served in the military and never will, thus they obviously have no knowledge of patrolling techniques, unless they’ve taken specific civilian training.

If you’re someone who has never had the experience of having to move from one point to another, with the expectation that you may run into some people who want to do you harm, then this article is definitely for you.

I fall into the category of having military experience, including a combat deployment to Afghanistan where, in the performance of my duties, I had to patrol with a platoon-sized element, and at times we either came under fire or were in the vicinity where fighting was taking place. There is else nothing quite like it that I’ve ever experienced in my lifetime.

We often moved through villages and towns on foot, and that always presented a special challenge because you were never quite certain what was waiting for you down the street or around the next corner. That said, we were deployed to a part of the world where major and intermediate cities are few and far between — nothing like the United States and most European and Asian nations.

So when you consider that cities are replete with multi-story buildings, street-level and below-street-level rooms and passageways, you can begin to fully appreciate how extremely difficult it is to get from point A to point B safely.

Naturally, patrolling in the woods or along a rural stretch of highway is different, in that the potential approaches for the enemy are different. In a wooded area, the enemy can use both cover and concealment (camouflage) to remain out of view.

That said, the techniques behind patrolling are essentially the same no matter what your terrain, and they should be practiced so often they become second nature to you:

Chart a route: Before you ever set out on a patrol, you should know where you’re going. Once headed in the general direction, though, you’re still going to need to chart your route a little bit of ground at a time. Before you move, make sure every member of the patrol knows where to go.

Stay alert: Keep your head on a swivel. This doesn’t mean wildly moving your head from side to side, up and down; it means you keep your gaze and your head movement steady as you scan your surroundings in a purposeful way. You’re looking for any movement or anything that seems out of place. Also, keep an eye out for places where an enemy might be hiding, waiting to ambush you. And make sure the barrel of your rifle moves in the same direction your eyes go.

Provide cover to the lead element: Say you are getting ready to cross a creek or a street. Don’t just send everyone across at once; go in singles or pairs and always make sure that someone remains at the crossing point to provide cover fire, if necessary, to the crossers. Once someone crosses the stream or street, they should also begin providing cover for the follow-on crossers.

Don’t leave unprepared: Plan for the unexpected. Don’t start a patrol without having water and rations, for example, because you’re “just going to be out for a little while.” Unexpected things happen and if you don’t plan for them, then you’re going to be caught out in the open far more vulnerable than you needed to be. Remember, “chance favors the prepared mind” — and prepared patrol.

Here’s a mini-instructional video you will find useful:

About the author : J.D. Heyes is a senior writer for NaturalNews.com and NewsTarget.com, as well as editor of The National Sentinel.

THE FIVE BEST PLACES TO BUG OUT IN THE USA

EMERGENCY WOUND CARE: WHEN ALL YOU HAVE IS IN YOUR PANTRY

17 ITEMS YOU’LL REGRET NOT HAVING ENOUGH OF WHEN SHTF

STRATEGIC RELOCATION: WHERE TO GO WHEN IT HITS THE FAN (FULL VIDEO)