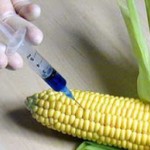 A comparison of US Midwest non-GM with GM corn shows shockingly high levels of glyphosate as well as formaldehyde, and severely depleted of mineral nutrients in the GM corn Dr Mae-Wan Ho

The results of a comparison of GM and non-GM corn from adjacent Midwest fields in the US that first appeared on the Moms Across America March website [1] are reproduced in Table 1.

*The GM corn was grown in a field that has been no-till, continuous GM corn (Roundup Ready) for 5-10 years and with a glyphosate herbicide weed control regime for all of the 10 years. The Non-GM corn has not had glyphosate (or Roundup) applied to the field for at least five years. The GM corn test weight was 57.5 lb; and non-GMCorn test weight 61.5 lb.

As Zen Honeycutt, who posted the report commented, glyphosate, shown to be toxic at 1 ppm, is present at 13 ppm in the GM corn. Similarly, formaldehyde at 200 ppm is 200 times the level known to be toxic in animals.

It is not surprising that this analysis has been carried out independently; i.e., not by biotech companies. It was done by farmers themselves. The high level of glyphosate is bad enough. Scientific evidence on glyphosate accumulated over three decades documents miscarriages, birth defects, carcinogenesis, endocrine disruption, DNA damage, neurotoxicity, and toxicity to liver and kidney at levels well below recommended agricultural use (see our recent review [2] Why Glyphosate Should Be Banned, SiS 56). The presence of formaldehyde – a genotoxic and neurotoxic poison at such enormous concentration – is totally unexpected.

Howard Vlieger, a crop nutrition advisor working with family farmers in 10 states across the US, who has been involved in the study and research of GMOs since 1996, explained in an interview [3] that people want “a side by side comparison” of the corn in the same soil conditions with the only difference being the application of glyphosate based herbicide on the GM Roundup Ready (RR) corn and a conventional herbicide on the non-GM corn. “This has not been done and cannot be done according to the technology agreement signed by a farmer planting GM seed without being at risk of being sued by the patent holder of the GM RR corn,” he said.

In this case, however, ears of corn from two adjacent corn fields in the Midwest, separated only by a fence, were sampled two weeks before harvest. The corn fields were selected by a third party and the samples collected in exactly the same manner. The separately bagged ears of corn were shelled from the cob and the grain samples sent to the lab for glyphosate testing. The non-GM corn field has not been sprayed with glyphosate for at least five years (see Table 1).

The samples were sent to a certified laboratory where it was prepared for testing on gas chromatography-mass spectrometry, an analytical method in which chemical compounds are first separated on a chromatographic column according to their size and charge and other chemical properties, and then ionized and identified based on mass to charge ratios. The RR corn tested contained 13 ppm glyphosate – coincidentally the EPA’s newly set legal limit of glyphosate in corn – while the other non-GM corn sample tested free of any glyphosate. The RR corn sample that tested positive for the glyphosate residue also tested positive for formaldehyde at a level of 200 ppm.

Where does the highly toxic formaldehyde come from?

Plant pathologist and retired Purdue University professor Don Huber, who has been sounding dire warnings on glyphosate poisoning crops, soil, livestock, and people (see [4] USDA Scientist Reveals All – Glyphosate Hazards to Crops, Soils, Animals, and Consumers, SiS 53), commented that formaldehyde can come from degradation of glyphosate [5]. But it can also come from normal plant 1-C metabolism, as for example, de-methylation of serine to glycine plus formaldehyde.

Formaldehyde does not exist in the free-state in a healthy normal plant. It is toxic compound that reacts with proteins, nucleic acids and lipids, and has been classified as a mutagen and suspected carcinogen [6]. Formaldehyde is also neurotoxic, and at ~100 ppm induced amyloid-like misfolding of tau protein, leading to the formation of protein aggregates similar to those found in Alzheimer’s disease; followed by programmed cell death of the neurons [7]. In normal cells and organisms, formaldehyde is detoxified by glutathione-dependent formaldehyde dehydrogenase (GDFDase) to formic acid [8]. GDFDase is dependent on zinc [9], and it is likely that the chelating action of glyphosate [4] may be responsible for inhibiting the enzyme’s activity by depriving it of zinc.

“Of course the scariest part of this is that any RR plant (corn, soybean, canola, cotton, sugar beet or alfalfa) that is sprayed with glyphosate could potentially produce formaldehyde … and then the formaldehyde would unknowingly end up in the feed and food supply.” Vlieger said [3].  The accumulation of formaldehyde was not due to any unusual environmental stress experienced by the GM corn.  “This corn was not raised in an area that was affected by the extreme drought conditions of 2012.”

He also told UK group GMWatch [10] that the glyphosate and formaldehyde could “explain the continuing problems we are witnessing in livestock operations with poor animal health when GMO feed stuffs are in the diet.”

Obviously, the analysis should be repeated on more samples of GM and non-GM corn grown side by side to see if these remarkable differences could be replicated. If so, we can only conclude that previous data submitted by and for the companies that found GM corn “substantially equivalent” to non-GM corn must have been fraudulent, and the perpetrators need to be brought to justice.