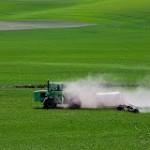 By: Roger Landry, The Liberty Beacon

Those of us who have been in the GMO fight for any length of time are painfully aware of the corruption and cronyism involved. Mega corporations such as Monsanto enjoy a revolving door into the regulatory heart of many governments across the globe with a special emphasis on the US government.

The key players in this industry have been extremely successful at eliciting favorable actions such as, immunity from prosecution as well as favorable laws and regulations encouraged by sub-par or biased legal standards. Accountability is almost non existent and ethics don’t appear to be practiced or even exist.

When an industry whoes products are under fire from across the planet for eliciting extreme health and biosphere hazards, is allowed to police its own science and thereby set the acceptable standards, then greed and the lust for power become the standard, not ethics and concern for human life.

The Great GMO experiment underway is proving to be a colossal failure and eminent danger on so many levels, and may just as well prove to be the most heinous intrusion into the health of humanity and the global biosphere ever perpetrated … The most concerning aspect of all of this is that the GMO industry HAS to be aware of this on many levels! So just how deep does this rabbit hole go?

Eighty percent or better of all the processed foods we buy in the supermarkets today contain GMO’s and trace amounts of the deadly chemical poisons (Roundup etc…), meaning even if you are conscious of this health tyranny, without a college degree in chemistry to decipher the ingredient labels, these poisons are extremely difficult to avoid.

The concept of GM crops was sold to farmers under the pretext that the yield per acre would increase to a level as to make handsome profits a reality. To date this has proven false.

The concept of insect resistant crops was sold to farmers under the pretext that they would require far less insecticides on their fields thus lowering the per acre cost to grow these GM crops. To date this has proven false.

The concept of chemical (Roundup) resistant crops was sold to farmers under the pretext that they would be able to control weeds in their fields much more effectively and with less chemicals and again show more profit per acre planted. This again has proven false and has given rise to what is now termed super weeds and super bugs, that are consequently just about chemical (Roundup) resistant. This now requires the spraying of some fields at a much higher rate than before this failed experiment began.

Cross contamination is now a major issue in many areas as the natural pollination process carries the genes from a field of GM crops to the field of non-GM crops, and out into uncultivated areas. Some scientists are ringing the alarm bells with vigor, screaming at the top of there lungs that irreversible damage is proliferating throughout the global biosphere and this may in fact prove fatal to it.

Time after time we see the claims and promises of GMO’s crash and burn in flames. But by far the biggest misrepresentation or blatant lie is that “GMO’s are safe for human consumption”! With links to everything from Autism to Cancer (two of the most prolific health catastrophes in the USA), independent studies being conducted across the world are proving the hazards of GM food consumption daily, and this is ignored by both the GMO industry and our government possibly leading to the catastrophic endangerment of humanity itself. America is sicker than at any point in our history by a huge margin (FACT). Is it just coincidence that this coincides almost perfectly with the rise of GMO’s, and their massive proliferation into our society?

Genetically modified (GM) crops are promoted on the basis of a range of far-reaching claims from the GM crop industry and its supporters. However, a large and growing body of scientific and other authoritative evidence shows that these claims are not true. On the contrary, evidence presented in this report indicates that GM crops:

Based on the evidence presented in this report, there is no need to take risks with GM crops when effective, readily available, and sustainable solutions to the problems that GM technology is claimed to address already exist. Conventional plant breeding, in some cases helped by safe modern technologies like gene mapping and marker assisted selection, continues to outperform GM in producing high-yield, drought-tolerant, and pest- and disease-resistant crops that can meet our present and future food needs.

It is well past time to bring this evil experiment to a screeching halt, or suffer the overwhelming and everlasting consequences …