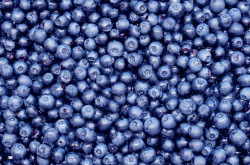 Another study has shown that fruit is good for you. Just be sure to eat it in solid form.

Research published Thursday in the British Medical Journal analyzed the results of long-term health studies that tracked the diets of nearly 200,000 people over two decades, some of whom developed type 2 diabetes.

The scientists found that those who ate at least a couple of servings per week of certain whole fruits — notably blueberries, grapes, and apples — were 23 percent less likely to develop type 2 diabetes than those who avoided them.

On the other hand, those who drank at least one serving of fruit juice daily were 21 percent more likely to develop the disease. The BBC breaks it down:

For example, replacing fruit juice with blueberries could reduce the risk of contracting type-2 diabetes by 33%, with grapes and raisins by 19%, apples and pears by 13% – and with any combination of whole fruit by 7%.

Replacing fruit juice with oranges, peaches, plums and apricots had a similar effect.

“The juicing process gets rid of the fruit, just leaving fluids which are absorbed more quickly, causing blood sugars and insulin levels to rise if they contain sugars.”