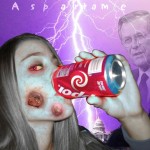 Each year, Americans consume about 5,250 tons of aspartame in total. 86 percent of this aspartame (4,500 tons) is from the consumption of diet sodas. Diet soda is the largest dietary source of aspartame  in the U.S. A study recently published at the beginning of December 2012 links the consumption of Aspartame to increased risk of Lymphoma and Leukemia. The study was conducted by the Channing Division of Network Medicine, Department of Medicine, Brigham and Women’s Hospital and Harvard Medical School, Boston, MA and Nutrition, Harvard School of Public Health, Boston, MA. The study was a follow up after a 22 year period of data collection including frequent dietary and health check ups of the study group.

We have covered the subject of aspartame on several occasions that included findings that deomstrate how aspartame damages the brain. This new study suggests that as little as a single 355ml can of diet soda daily greatly increases the risk for cancers in men and women. It can also increase the risk of multiple myeloma and non-Hodgkin lymphoma in men. The results of this study forces us to really look at the effects of aspartame as there has never been a more comprehensive, long term study ever done on the topic. It is important to note that this can also reveal many more serious diseases and illnesses as data is observed even further.

The Most Comprehensive Study to Date on Aspartame

This study tracks over two million person-years giving it a huge pile of data to generate results from. Researchers prospectively analyzed data from the Nurses’ Health Study and the Health Professionals Follow-Up Study for a 22-year period. A total of 77,218 women and 47,810 men were included in the analysis, for a total of 2,278,396 person-years of data. It is not just the sample size of this study that makes it impressive, it is also the thoroughness with which aspartame intake was assessed in comparison to previous studies. Over the course of the study, every two years participants were given a detailed dietary questionnaire, and their diets were reassessed every four years. Shockingly, previous studies done on aspartame who revealed no link between aspartame and cancer in humans, only assessed participants’ aspartame intake at one point in time. This poses a major weakness in the accuracy of previous studies.

The combined results of this new study showed that just one 12-fl oz. can (355 ml) of diet soda daily leads to:

This is a powerful set of results as it leaves little to ponder about when it comes to the long time talked about risks of aspartame on our health. The results were based on multi-variable relative risk models, all in comparison to participants who drank no diet soda. It is important to note that it still remains unknown why only men drinking higher amounts of diet soda showed increased risk for multiple myeloma and non-Hodgkin lymphoma, but the continuation of this study may reveal these results later.

Most of the past studies showing no link between aspartame and cancer have been criticized for being too short in duration and too inaccurate in assessing long-term aspartame intake. This new study solves both of those issues. The study in fact shows a positive link to cancer and it should come as no surprise given that a previous best-in-class research study done on animals (900 rats over their entire natural lifetimes) showed strikingly similar results back in 2006. More worrying is the follow up mega-study, which started aspartame exposure of the rats at the fetal stage. Increased lymphoma and leukemia risks were confirmed, and this time the female rats also showed significantly increased breast (mammary) cancer rates. This raises a critical question: will future, high-quality studies uncover links to the other cancers or diseases in which aspartame has been implicated?

My Own Thoughts I have been researching aspartame and other health related ilnesses for a few years now and have found a lot of different information as it relates to effects of various substances on health. This study stands out from many as it illustrates the importance of conducting research that is of quality and done over time. While we cannot confirm with 100% accuracy that this was the key factor in these ilnesses, we can confirm that it does play a big role. Also, when we look at what exists today as studies that are in favor of Aspartame being safe, we find that there are many weaknesses behind them that would produce poor results in accuracy.

Of course we can always go back to what feels natural and what would make sense when we look at our foods and I think this is something that we dont require  a scientific analysis to observe. Of course this is my opinion but, when we are adding chemicals that are synthetic and created in a lab to our food, it does not reflect naturally occurring elements that we are designed to consume. The human body was not designed to take in these types of substances through nature, which makes perfect sense as to why the majority of chemicals found in foods today have numerous links to serious health affects. This isn’t to say the body can’t handle all synthetics, but instead just shows that we should not be surprised to find out results like this.

If previous research on the subject was not enough, there is now undeniable evidence that suggests we should not be consuming aspartame at all in our diet. Switching over to sugar sweetened soda is also not a good alternative as this study also found that men consuming one or more sugar-sweetened sodas daily saw a 66 percent increase in non-Hodgkin lymphoma. It has become clear that having no soda at all in our diet is the ideal way to go. This would not only remove the aspartame and sugar risks, but it will also help in keeping your body in a more alkaline state.