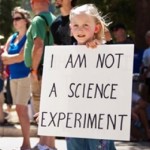 Now, the same who’s who of the world’s most notorious global corporate bad actors has descended on Washington State. Why? To try to stop Washington State voters from passing I-522, a citizens’ initiative that, if passed, will require mandatory labeling of genetically modified organisms (GMOs) in all food products sold in Washington State.

Like bad robots, they’re spitting out the same old, tired lies, designed to scare voters into voting against their own best interests.

Here are the lies. And the facts. Please read, print, email, roll up and stuff into a bottle you launch into the sea . . . whatever it takes to spread the word that while $46 million may buy a lot of lies, it doesn’t change the facts.

Lie: Labeling genetically engineered foods (GMOs) will cost taxpayers millions of dollars a year. Truth: Empirical studies have concluded labeling would lead to no increases in prices. Since the European Union labeled GMOs in the 1990’s, there has been “no resulting increase in grocery costs.” Trader Joe’s, Clif Bar & Co. and Washington’s own PCC Natural Markets all label their non-GMO product lines at no additional cost to consumers.

Lie: I-522 is full of arbitrary special interest exemptions that will just confuse consumers. Truth: I-522 requires labeling for the GE foods that are most prevalent in the American diet – food on supermarket shelves. I-522’s exemptions are easy to explain and guided by common sense and the law:

• Restaurants – Restaurants and bake sales are not required to list the ingredients in their products. Requiring labeling for GMOs would have required tracking all the ingredients in restaurant meals, and since no other laws require that, it didn’t make sense for this one to. • Meat, cheese, dairy and eggs from animals – These will be labeled if they come from genetically engineered animals. However, they are exempt if the animals ate genetically engineered feed but are not themselves genetically engineered. This exemption is common all around the world. It didn’t make sense for Washington’s law to be stricter than international standards. • Alcohol – Alcohol labeling is regulated under different laws than food at both the federal and state levels. Because of the single-subject law that requires initiatives to apply to only one subject, alcohol couldn’t be included.

Lie: Consumers don’t need labels to avoid GMOs. All they need to do is buy certified organic products. Truth: Food companies routinely and intentionally mislead consumers by labeling products “natural” in order to attract health-conscious consumers. Because the U.S. Food & Drug Administration (FDA) does not prohibit the use of the word “natural” on products containing GMOs, most consumers are fooled by this label. According to a recent poll by the Hartman group, 61 percent of respondents erroneously believed that the use of the word “natural” implies or suggests the absence of GMOs, versus 63 percent who correctly believed that the label “organic” means that a product is GMO-free. Food companies should be required, as they are in some 60 other countries, to clearly state that a product contains GMOs. If companies truly believe their GMO ingredients are perfectly safe, why spend millions to keep from having to label them?

Lie: Washington will be the only state in the nation to label GMOs, unfairly hurting farmers and the state’s multi-billion agricultural industry.

Truth: Washington won’t be the only state labeling GE foods. Connecticut, Maine and Alaska have passed labeling laws and dozens of other states are considering identical proposals. Besides, 64 countries already require labeling, so many farmers are already used to labeling for exports. In fact, many Washington farmers support labeling because they believe that growing GMO crops destroys healthy soil, and because they sell crops to overseas markets that either require labels on GMO crops, or have banned them completely. These countries are increasingly concerned about U.S. non-GMO crops, such as wheat, that could be potentially contaminated by cross-pollination with GMO crops. Lie: I-522 encourages shakedown lawsuits by giving trial lawyers an unprecedented new right to sue farmers, food producers and store owners over the wording on food labels.

Truth: I-522 offers no economic incentives for lawyers to sue. Consumers can’t file a class action suit against food producers without first giving the food producer a warning and the opportunity to comply with the law. As long as the defendant fixes the labels, then no class action is permitted. Once the class action option is off the table, a consumer could sue only to get a court order to require labeling, and only for the few dollars that consumer paid to buy the product. Where’s the incentive?

If the state brings a court action to enforce the new law, any penalties recovered by the state go only to the state – not the plaintiff or the lawyer. Food companies are required by law to label for ingredients, calories, etc., and there have been few violations. Why wouldn’t companies accurately label genetically engineered foods, too?

For the real story about abusive lawsuits by rapacious trial lawyers, check out what Monsanto is up to: suing farmers across the country for growing their own seeds.

Lie: Labeling GMOs creates a bureaucratic nightmare for grocers and retailers and requires the state government to monitor labels on thousands of food products in thousands of stores, costing taxpayers millions.

Truth: Under I-522, the person responsible for labeling processed foods is the person who puts the label on: the manufacturer. Retailers would only have to label the few raw commodities (sweet corn, papaya, squash) that are genetically engineered. They can either stick a simple label on the bin or, if they wish, they can ask their supplier for a sworn statement that the crop is not genetically engineered. I-522 requires no costly testing for GE ingredients. No burdensome government oversight is necessary. The system is inherently designed to protect small grocers and retailers while providing consumers with the right to know what’s in their food without increasing grocery costs. Lie: GE foods pose no health safety risks.

Truth: GMOs have never been proven safe. The FDA requires no pre-market health safety studies, and the only long term peer-reviewed animal study conducted involving GMO corn sprayed with Monsanto’s Round Up herbicide, found massive tumors, organ failure and premature death in rats. In addition, a growing body of peer-reviewed animal studies have linked these foods to allergies, organ toxicity, diabetes, cancer, autoimmune disorders, birth defects, high infant mortality rates, fertility problems, and sterility. Clearly, more independent, long term studies are warranted. Until GMOs are proven unequivocally safe, they should be labeled so consumers can avoid them if they choose. Lie: GE foods are as, or more, nutritious than organic foods.

Lie: The World Health Organization, American Medical Association, National Academy of Sciences and other respected medical and health organizations all conclude that GE foods are safe.

Truth: The United Nations/World Health Organization food standards group and the American Medical Association have called for mandatory pre-market safety testing of genetically engineered foods, a standard the U.S. fails to meet. A National Academy of Sciences report states that products of genetic engineering technology “carry the potential for introducing unintended compositional changes that may have adverse effects on human health.” Numerous public health and medical groups support the labeling of GE foods, including the American Public Health Association, Washington State Nurses Association, Breast Cancer Action, Allergy Kids Foundation, Autism One, and many others. Lie: We need GMOs to feed the world.

Truth: Studies have proven that GE crops do not lead to greater crop yields. In fact, just the opposite is true. A 2009 study by the Union of Concerned Scientists found GMO crops fail to produce higher yields. And a recently released, peer-reviewed study published in the International Journal of Agricultural Sustainability found that conventional plant breeding, not genetic engineering, is responsible for yield increases in major U.S. crops.

Lie: The creation of GE seeds is comparable to the cross-breeding that our ancestors did to create hardier versions of heritage crops.

Truth: Cross breeding is the product of guided natural reproduction, while GMOs are created in a laboratory using high-tech and sophisticated techniques. One of these techniques involves gene-splicing which is used to cross a virus or a bacteria with a plant. These untested, unnatural creations are the antithesis to what our ancestors did, and what responsible farmers do: cross-pollinate different varieties of the same plant to help naturally bring forth desirable characteristics.

Lie: GE crops reduce the need for pesticides and herbicides.

Truth: GE crops have dramatically increased the use of herbicides and pesticides. According to a new study by Food and Water Watch, the “total volume of glyphosate applied to the three biggest GE crops — corn, cotton and soybeans — increased 10-fold from 15 million pounds in 1996 to 159 million pounds in 2012” with the overall pesticide use rising by 26 percent from 2001 to 2010.

The report follows another such study by Washington State University research professor Charles Benbrook last year that found that overall pesticide use increased by 404 million pounds, or about 7%, from 1996 and 2011. The use of GE crops are now driving up the volume of toxic herbicides needed each year by about 25 percent.

Lie: GE crops aren’t harmful to the environment. Truth: Besides polluting the environment with herbicides and pesticides, GE crops are leading to biodiversity loss and the emergence of “super bugs” and “super weeds” that are threatening millions of acres of farmland, requiring the need for even more dangerous and toxic herbicides.

GE crops, and the toxic pesticides they are designed to withstand, are endangering numerous critical species, including the honey bee, frogs, birds, fish and the Monarch Butterfly.

And don’t forget our air and water. The island of Molokai in Hawaii has had its air and water quality destroyed by Monsanto’s almost-2000-acre test facility. The same is true worldwide, with many areas around GMO farms reporting horrific bloody skin rashes, an uptick in asthma and toxic pesticides that leach into the groundwater.