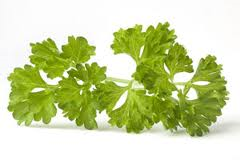 Although parsley may well be considered the world’s most popular herb, it is too  seldom seen as a super healthy food that can assist the body in so many ways.  Being a close relative to celery, a touch of parsley is very often added to  plates in order to enhance taste and overall look. It’s extremely nutritious and  a great source of vitamins A, C and K, the latter being the most abundant.  Vitamin K generally lacks in most people’s diets; since it is believed that such  a deficiency could in part be linked to osteoporosis, it’s definitely best to  consider the regular use of parsley in order to prevent this medical  problem.
Parsley provides tremendous health benefits thanks to its  volatile oil components (myristicin, limonene, eugenol, and alpha-thujene), as  well as its flavonoids (apiin, apigenin, crisoeriol, and luteolin). From studies  conducted on animals, myristicin has actually been shown to inhibit tumor  growth. Overall, the oils seem to have the ability to block certain carcinogens  from expanding, such as with benzopyrenes, which smokers most likely recognize  as being part of cigarettes.
Many health conscious people know that  flavonoids act as very helpful antioxidants and it’s obviously no different in  parsley’s case. Besides preventing oxygen-based damage to cells, research has  shown that apigenin actively contributes to lowering the risks of leukemia or  pancreatic, cervical and ovarian cancers. It is also believed that apigenin has  the capacity to interfere with the expansion of cancer cells, displaying  impressive anti-tumor properties.

The antimicrobial effects of parsley

Parsley does present some  interesting antimicrobial properties that were confirmed by the results obtained  from a study conducted at the Animal Health Research Institute. The research  tried to validate the effectiveness of various plant extracts as possible  antimicrobial agents when added to food, Kareish cheese being used in this  particular case. Although it didn’t place at the top of the rankings, parsley did prove that it had the ability to minimize the spread of natural microflora,  coliforms, yeast and molds.
Regular bad breath is often the result of a  toxic environment within the body. On the other hand, everyone knows that some  healthy foods, such as onions and garlic, will never go unnoticed once consumed.  These inconveniences can easily be countered by parsley’s capability of not only  cleansing and detoxifying the kidneys, liver and bladder, but also acting as a  quite reliable breath freshener, able to repel the worst occurrences of bad  breath.
Last but not least, parsley is capable of converting homocysteine  into benign molecules. Since it’s now a known fact that high levels of  homocysteine can be dangerous for cardiovascular health,  foods like parsley that are rich in folic acid can help prevent or diminish risk  of strokes, especially for diabetics or people already suffering from heart  conditions.