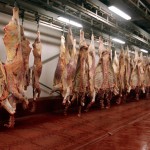 A meat inspection program which the US Department of Agriculture hopes to approve for all domestic pork plants has frequently allowed the production of contaminated meat at American and foreign plants where the approach has already been instituted.

Under the program, meat production facilities are allowed to have  as much as 20 percent speedier processing lines, and companies  can employ more of their own inspectors while having fewer  in-house USDA inspectors.
These protocols are already allowed in five US hog plants as part  of a pilot program that began in 1997 with the intention of  allowing all pork plants nationwide to institute the program  after a USDA safety analysis.
However, three of the pilot plants were found to be among the 10  worst offenders for domestic health and safety infractions,  including failure to detect and remove fecal matter from meat,  according to a report this spring by the USDA inspector general.  Government inspectors eventually caught the violations at the end  of processing lines, though federal procedure considers such late  detection to be a violation of standards.
While nationwide consent for the pilot program is on hold,  foreign red meat exporters to the US are allowed to follow  similar procedures. In the last two years, plants following the  new inspection guidelines in Canada and Australia were cited for  a host of problems with exported meat, according to The  Washington Post.
The five US plants were allowed in 1997 to begin the Hazard  Analysis and Critical Control Point-based Inspection Models  Project (HIMP), which granted the use of private inspectors and  accelerated processing lines. The move was considered a  significant victory for meat production companies looking to  maximize profit and reduce regulatory strictures on inspection  procedure. The government saw the new guidelines as potentially  cost-saving for consumers.
The USDA said in 1997 that it would monitor the new guidelines at  the five plants in expectation of offering them nationwide. But  by this past spring, the USDA still had not evaluated the pilot  program for its stated safety and health goals. The agency says  it will have a complete report in March and hopes to make the  case for 608 hog plants in the US.
Yet the USDA inspector general’s office has found that three of  the five plants in the pilot program have garnered scores of  health and safety violations. Auditors did not identify the five  plants, nor could it determine whether the infractions could be  attributed to the inspection system, since no official study had  been done.
The auditors did say, however, that safety records at the three  most troubled pilot plants are worse than those at hundreds of  other US pork plants that use the traditional system, with slower  processing lines and more government inspectors.
A separate report by the Government Accountability Office said  the pilot program was too small to “provide reasonable  assurance that any conclusions can apply more broadly to the  universe of 608 hog plants in the United States” and that  comparable data from pilot plants and traditional plants was  needed to evaluate the new procedures.
Six USDA inspectors working in the pilot plants raised health  concerns in interviews with The Washington Post. Several of them  said that company and government workers are verbally abused and  threatened for slowing down the faster processing lines or for  complaining too much about safety procedures.
“We are no longer in charge of safety,” said one  inspector. “That’s what the public needs to know.”
Several trade partners have received permission from the US to  use HIMP-related safety and health procedures at processing  plants in recent years. USDA auditors visited plants in Canada,  Australia and New Zealand, and determined their systems were  similar to the US pilot program.
Three beef plants in Canada that export to the US were allowed to  use new guidelines starting in 2006. Since then, there have been  occasional cases of tainted meat being rejected at the US border.  The worst case of contaminated beef occurred around one year ago,  leading to 18 reports of illness in Canada, although none were  reported in the US.
In September 2012, a Canadian plant owned by XL Foods Inc. had to  recall 8.8 million pounds of beef and beef products contaminated  with E. coli. Around 2.5 million pounds of the tainted product  went to the US market. A Canadian government-appointed  independent review panel found the pace of the inspection system  to be a contributing factor to the health infractions.
“If the line speed is too fast, workers would have little time  to examine and trim off visible contamination from  carcasses,” the panel wrote in a report. “Staff would also  have insufficient time to properly sterilize their knives between  trimmings.”
The panel also stated that the speed of processing lines made  sanitizing carcasses for E. coli more difficult.
“If sprays are not properly applied to the carcass, they could  serve to spread the contamination across a wider area,” the  report said.
The Canadian plant is now owned by JBS USA, the largest beef  exporter in North America.
Meanwhile, USDA officials have called Australia “the worst  performer of all exporting countries.” After allowing the  pilot program in Australian facilities in 2008, USDA officials  began to take notice of tainted products at port-of-entry  inspections.
In early 2012, USDA inspectors rejected “multiple”   shipments of contaminated Australian meat, according to internal  documents.
Australian food safety officials announced improved inspection  protocols last summer, yet the USDA protested again in December  saying the new guidelines weren’t “effective across the  system.” The US agency said that meat with fecal matter and  partly digested food from multiple plants using the new  inspection system had arrived at US ports. Contaminated products  included beef, mutton, and goat meat.
Since New Zealand plants were granted permission to use the new  guidelines in 2011, no meat produced by the plants has been  rejected at US ports due to contamination.