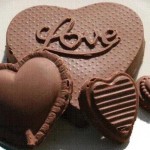 Usually it’s women we hear linked, stereotypically, with chocolate, but new research focuses on the sweet stuff’s health benefits for men. Risa N. Schulman discusses the study and four others dealing with chocolate and cardiovascular health in the latest HerbalGram, the Journal of American Botanical Council. The studies appear in Neurology.

There’s been much evidence showing cocoa and chocolate’s potential benefits for cardiovascular health through antioxidant, anti-platelet, anti-inflammatory, and blood pressure-lowering effects, Schulman writes. The Neurologyreview of studies found two with statistically significant results. None of the research focused exclusively on men, so, the authors, Wolk and Larsson, conducted a prospective study among a cohort of Swedish men. In addition, the authors conducted a meta-analysis of prospective studies involving chocolate and stroke risk.

In their prospective study, the highest levels of chocolate consumption were associated with a decreased risk of stroke in men, and this was confirmed by the meta-analysis. The results can be extrapolated to men in general because of the wide representation of men present in the sample population.

Though the exact mechanism of action for the stroke benefit has not been found, the authors write that it’s probably because of the pleiotropics (producing multiple effects from one gene) cardiovascular benefits of chocolate. These include the chocolate’s blood pressure lowering powers.

The strengths of the study, writes Schulman, are its large population and its nearly complete data regarding stroke incidence. Its limitations include a lack of differentiation between types of chocolate consumed, self-reporting of consumption, and evidence of small study effects in the meta-analysis. Alas, the study’s authors caution that chocolate should be consumed in moderation because of its high fat and sugar content.

Last year, New Nutrition Business director of consultancy Julian Mellentin said cocoa as poised to become a major force in the market for functional and healthier foods. Pointing to more than 100 published clinical studies suggesting the health benefits of cocoa flavanols, he said the compound was at a “tipping point” as a result of the“convergence of scientific and technological progress, corporate strategy, consumer awareness and consumer desire for foods that can claim to be naturally healthy.”