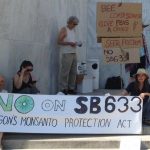 An initiative to require labeling of genetically modified foods is kicking up a lot of attention in Washington state with about a month to go before voters there cast their ballots.

With that attention has come money — big time. The Seattle Times reports that Monsanto and DePont Pioneer recently contributed millions of dollars to the campaign to defeat the I-522, pushing fund-raising efforts to a near record high.

The newspaper says that just eight donors have contributed a whopping $11.6 million to trample the measure.

Among Washington’s most-moneyed opposition campaigns to statewide ballot measures of all time, that figure trails only the roughly $12.4 million raised by foes of the liquor-privatizing initiative in 2011, the newspaper reports.

GMOs, genetically modified organisms, are a hot topic in Oregon, too. A bill up for consideration in the special session would limit the ability of local governments, such as Josephine County, from enacting a ban on the planting of genetically modified seeds. According to an article by Harry Esteve of The Oregonian, environmental  groups and others are pushing Gov. John Kitzhaber and other Democrats to reject the proposal.

During the regular legislative session, which ended in July, the Senate  approved a bill that pre-empted local governments from regulating what  seeds farmers could plant. But Senate Bill 633 died in the House.

Republican legislative leaders and some pro-farming groups saw the special session as a chance to give the bill new life, Esteve reports.