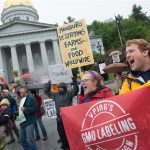 An amendment dubbed the “Monsanto Protection Act,” which currently allows large agriculture and biotech corporations to ignore court orders involving the safety of genetically modified seeds, has been stripped from Senate’s spending bill that could be voted on as early as Wednesday afternoon.

Following an organized campaign against the provision in recent months, its removal was being cheered by food safety and environmental activists as a victory.

“Millions of people around the world were outraged when the bill passed originally and removing the Monsanto Protection Act from the current bill is a sign that the food movement has arrived politically. The American people are tired of Monsanto’s lies and the manipulation of our political process and we’re not backing down.” – Dave Murphy, Food Democracy Now!

The Monsanto Protection Act, otherwise known as the Farmer Assurance Provision rider, was wedged into a stop-gap budget bill that passed earlier this year and signed into law by President Obama in March.

The rider was the source of outrage by many and quickly dubbed a form of “corporate welfare” that benefited large biotechnology corporations firms such as Monsanto and Syngenta as it barred US federal courts from being able to prevent the sale or planting of GMO crops even if they failed to meet federal safety standards or were discovered to be harmful to humans or the environment.

In opposition to the law’s passage, several online campaigns as well as street protests followed.

The rider was set to expire this year, but an extension of the bill was included in the House’s version of the budget bill passed last week.

However, according to a statements released by the offices of Sen. Jeff Merkley (D-Ore.) and Sen. Barbara Mikulski (D-MD), the provision will not be extended and has now been removed from the Senate’s version of the bill.

“We have all known this rider’s days were numbered,” Colin O’Neil, director of government affairs for the Center for Food Safety, told Politico. “But given the recent GMO contamination episodes of wheat and alfalfa in Oregon and Washington it is clear that our nation’s safeguards, in particular those of the federal courts, should not be under attack from policy riders like this.”

“This is a major victory for the food movement and all those who care about openness and transparency in their government,” said Dave Murphy, founder and executive director of Food Democracy Now! The decision to strip the provision, he said, “is a sign that our voices can make the difference when we are effectively organized.”

According to Murphy’s group, its organizing has generated more than half a million signatures in a petition delivered to Congress and the White House demanding the removal of the rider. In addition, the law’s opponents logged more than 40,000 phone calls to members of congress in the last two weeks alone.

“This is what happens when people become engaged in the democratic process,” Murphy said. “Millions of people around the world were outraged when the bill passed originally and removing the Monsanto Protection Act from the current bill is a sign that the food movement has arrived politically. The American people are tired of Monsanto’s lies and the manipulation of our political process and we’re not backing down.”

“Short-term appropriations bills are not an excuse for Congress to grandfather in bad policy,”stated O’Neil. “Chairwoman Mikulski’s proposal to halt the Monsanto Protection Act, backed by Majority Leader Reid, is a welcome sea change in a political climate that all too often allows corporate earmarks to slide through must-pass legislation.”

Written by: Jacob Chamberlain on September 27, 2013.
Last revised by: