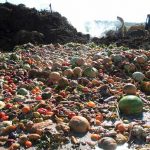 Currently, in the U.S., almost half of our food — 40 percent of what we grow — ends up in the garbage, according to an NRDC.org report, and globally food waste is to 50% according to a report from FAO.org.

The following is a list of the top 20 types of food, making up avoidable food waste…

The Waste and Resources Action Programme (WRAP), a British nonprofit, conducted a detailed analysis of avoidable household food waste in the U.K.

This list is likely very similar to what we here in the U.S. waste too…

Avoidable food waste is made up of food items that could have been eaten if they had been managed or stored better. The food may not have been fit for consumption at the time of disposal because it had gone moldy or had been spoiled or it may have been thrown away because it was no longer wanted.

As responsible preppers, we should focus on our food management.

From the garden (or store) to the table… food being a primary prep resource, should not be wasted. We should develop habits that enable us to more efficiently utilize and consume more of what we have.

Be aware of the misleading “Use-by” and “Sell-by” dates.

The point is to just be more aware of food waste, and to do your best to prevent it!